In the 36th week of 2020 for Wandering Through the Shelves' Thursday Movie Picks. We go into the subject of domestic thrillers as it explore events that occur inside someone’s home and all things get scary. Here are my three picks: 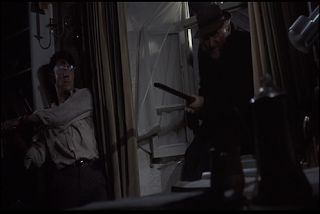 Sam Peckinpah’s bloody film about an American mathematician moving to Britain with his wife where they encounter some local hoods who want to cause trouble is indeed a thriller. Anyone who had seen Peckinpah’s films would be aware of the uncompromising violence in the film as it play into a hood who once had a relationship with Dustin Hoffman’s wife as it leads to trouble and then things worsen when Hoffman protects a mentally-challenged person who gets into trouble leading this air of invasion by these men who want to kill Hoffman and his wife. 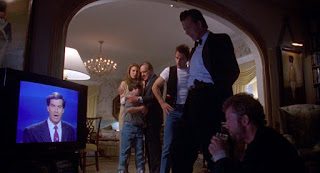 A remake of William Wyler’s 1955 starring Humphrey Bogart and Fredric March that was adapted from a novel/play by Joseph Hayes, the 1990 remake is a deeply flawed film yet it does have some moments of suspense as it play into an escaped criminal who hides into the home of a family with two other criminals. What makes the film more unusual is that it’s directed by Michael Cimino which is odd since much of the film takes place inside a house as he’s known more filming gorgeous exterior settings though he is able to get some decent performances from Anthony Hopkins, Mickey Rourke, Mimi Rogers, and Lindsay Crouse.

The film that introduced indie film audiences to the force that Ellen Page is this stylish drama where Page plays a teenage girl who gets the attention of a much older man in Patrick Wilson who invites her into his home and things become dark. Especially with Page taking control as it has this element of revenge as much of the action takes place at Wilson’s home. It is never afraid to go dark while it also play into the world of pedophilia and revenge.

Straw Dogs is a brutal film--a hard one to like in a lot of ways.

Hard Candy is also a brutal film, but I found it a hard one to dislike. I think it's a brilliant piece of film.

Hard Candy is an excellent pick!

We match on Hard Candy! Sraw Dogs made me uncomfortable, I don't think I ever finished it.

I think I know what Peckinpah was going for with Straw Dogs but that didn't keep me from hating the message and the film.

I've seen the original Desperate Hours and avoided the remake since multiple people have told me it is much less than the Bogart film. Still if I run across it one day I might watch to compare.

I've made it a point to not see Hard Candy, it just looks dark and ugly and despite it being all over today I'm still going to refrain.

Lots to choose from for this, I suppose the tension of the situation lends itself to be cinematically pliable. Here's the three I came up with.

Rear Window (1954)-Photo-journalist “Jeff” Jeffries, wheelchair bound because of a badly broken leg combats the boredom of being confined to his apartment by watching the activities of his neighbors though his rear window. Late one night he thinks he witnesses one of them, Lars Thorwald (Raymond Burr), murder his wife but initially has trouble convincing anyone of the fact. Slowly with the help of his acerbic nurse Stella (Thelma Ritter) and fashion model girlfriend Lisa (Grace Kelly) he starts to put the pieces together but when Thorwald begins to suspect Jeff knows something the tables are dangerously turned.

Deceived (1991)-Art restorer Adrienne (Goldie Hawn) and museum curator Jack Saunders (John Heard) have a seemingly perfect life living in their restored New York City loft with their daughter Mary. But that life is thrown into turmoil when Jack’s boss dies under questionable circumstances. Jack starts acting strangely then suddenly leaves town purportedly on business raising Adrienne’s suspicions. Before he returns he is apparently killed in a car crash but when Adrienne files for his death benefits it turns out “Jack Saunders” died in a plane crash 20 years ago. So who was the man she married? As she searches for answers the truth becomes increasingly dark and very perilous.

I never saw the Desperate Hours remake but I've always loved the Bogart classic. I think it gets overlooked among Bogie's bigger films.

I've only seen the last one!

I am 0 for 3 and have yet to see Straw Dogs or the Desperate Hours but I will stick with the original first. I have no desire to see the lastnpick

I haven’t seen any of these but this is the second time I see Hard Candy. I think I’ll give it a chance especially since it has Ellen Page. I actually can’t believe I still haven’t seen it as I love her.