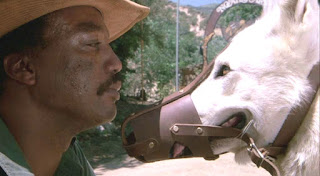 Based on the novel by Romain Gary, White Dog is the story of a dog trainer who helps a young actress retrain a stray dog that was trained to kill black people in an examination of racism. Directed by Samuel Fuller and screenplay by Fuller and Curtis Hanson, the film is an exploration of a black man dealing with a dog that kills black people as he tries to retrain it and tame him with the help of a young white actress as they deal with what had happened to this dog. Starring Paul Winfield, Kristy McNichol, Jameson Parker, Parley Baer, and Burl Ives. White Dog is a chilling and provocative film from Samuel Fuller.

A young actress finds a stray dog that she hit one night as she would take care of it unaware that it’s a white German Shepard who has been trained to kill black people where a series of incidents forces her to seek help where a black dog trainer tries to tame the dog. It’s a film with a simple premise as it plays into this young woman who finds a dog unaware of where it came from as she would see what this dog does first-hand during a film set where she was working where the dog attacked a black actress. The film’s screenplay by Samuel Fuller and Curtis Hanson is straightforward in its narrative yet it is more about this dog that the actress Julie Sawyer (Kristy McNichol) found where she took to a vet and pondered about taking it to a dog pound yet chooses to take care of it much to the dismay of her boyfriend Roland (Jameson Parker) who suspects something isn’t right about the dog.

Notably when the dog comes home one day with blood all over himself and following an incident on-set during a film shoot. She turns to the animal trainer Carruthers (Burl Ives) who sees what the dog does as does the black animal trainer Keys (Paul Winfield) who decides to take the dog in and hope to tame him. Yet, it would prove to be difficult as it play into the idea of race and what this dog had been trained to do where Julie learns first-hand about what this dog did as she isn’t sure if she made the right decision.

Fuller’s direction is largely straightforward with the exception of the scenes involving the dog attacking African-American victims. Shot on location in Los Angeles, Fuller presents a world where racism is still around but not in the most expected places as Sawyer lives in the Hollywood Hills trying to get work as an actress while Roland is a screenwriter. While Fuller does use some wide shots to establish some of the locations including the scope of the animal shelter where Carruthers and Keys train animals for film projects where they treat animals humanely and with care. Much of the direction has Fuller use close-ups and medium shots with some striking compositions that play into the interaction between human and dog. With the aid of Karl Lewis Miller of Animal Action, the dog is a major character in the film as he is portrayed by five different white German Shepard as Fuller’s close-ups of the dog in the way he looks at a black person showcases this sense of dread and what is to come.

Fuller also knows when to subvert some of the suspense during the film’s second act where the dog escapes as there’s a shot of the dog sniffing for food while there’s a young black child in the background as it adds to the air of discomfort. Keys is someone who would try and tame this dog as he has this hope that trying to show this dog kindness and compassion yet remains unsure of how a dog would act towards other people since dogs can only see black and white. Even as he is patient towards the dog to gain its trust but there is also this air of uncertainty into how a dog that had been trained to kill black people would react to society and a world that is complicated. Overall, Fuller crafts an eerie and visceral film about a white German Shepard who kills black people raising questions about the idea of racism.

Cinematographer Bruce Surtees does excellent work with the film’s cinematography as it is largely straightforward with some low-key lighting for some of the interior scenes at night as well as the usage of spotlight during a break-out scene at night. Editor Bernard Gibble does amazing work with the editing as its usage of slow-motion to play into the suspense as well as the stylish fast-cutting to showcase the dog’s attacks help play into the film’s suspense. Production designer Brian Eatwell and set decorator Barbara Krieger do fantastic work with the look of Sawyer’s home as well as the animal shelter that Carruthers and Keys run. Sound mixers Don Cahn, Jim Cook, Robert Gravenor, and Robert L. Harman do brilliant work with the film’s sound in capturing the atmosphere of the locations and how animals sound from afar. The film’s music by Ennio Morricone is incredible for its usage of somber piano and lush strings to play into the drama as well as soaring string arrangements for some of the film’s suspenseful moments.

The casting by Jane Feinberg and Mike Fenton is superb as it feature some notable small roles and appearances from Samuel Fuller as Sawyer’s agent, Paul Bartel as a cinematographer during a film shoot, Dick Miller as an animal trainer, Vernon Weddle as a veterinarian, Christa Lang-Fuller as a nurse, Marshall Thompson as the director of the film shoot, Lynne Moody as the actress the dog attacks, Bob Minor as a black animal trainer, and Parley Baer as a mysterious man who appears late in the film. Jameson Parker is fantastic as Sawyer’s screenwriter boyfriend Roland who is wary of the dog as he believes something isn’t right about that dog. Burl Ives is incredible as Carruthers as a semi-retired animal trainer/animal shelter owner who worked in movies as he has concerns about the dog while also watches closely at what Keys does believing it is working.

Kristy McNichol is amazing as Julie Sawyer as an actress who finds the dog and would take care of it but becomes troubled by his actions during a film shoot as she later realizes what kind of dog it is as she is unsure if she made the right decision. Finally, there’s Paul Winfield in a phenomenal performance as Keys as a black animal trainer who sees this dog as a challenge as he is eager to help this dog while is aware that he’s doing something impossible while he would find ways to get the dog to trust him yet has concerns about how this dog would react to society.

White Dog is a tremendous film from Samuel Fuller. Featuring a great cast, striking visuals, Ennio Morricone’s haunting score, and its study of racism and how animals are brainwashed to do horrific things. It is an unsettling film that explores the actions of a white German Shepard and a man’s attempt to try and cure the dog while dealing with the harsh realities of racism at its most rotten. In the end, White Dog is a sensational film from Samuel Fuller.

I'm not going to read this review fully yet because I haven't seen White Dog yet. It's been on my list for some time, and I just haven't pulled the trigger on it.

I suppose I really should.

@SJHoneywell-I purchased the film last month as one of the last blind-buys I had from the Barnes & Noble Criterion sale as this was a film I've been wanting to see. It feels much more timely right now given the times we're in and people do need to see this. Plus, this was a film by Samuel Fuller that I've been wanting to see as I've now covered most of his filmography with only 7 feature films left as I think the ones from the 1950s will be on TCM soon but the rest I'm sure are hard to find.