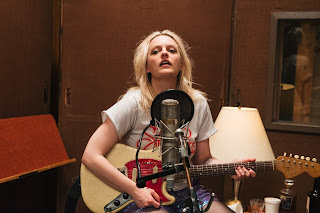 Written and directed by Alex Ross Perry, Her Smell is the story of a punk rock singer’s life of excess starts to take its toll upon being a mother as she deals with her band falling apart, dealing with old peers, and a new act on the rise. The film is an exploration of a woman dealing with changes as well as the fact that she is self-destructive as she hurts those including herself to the path of success. Starring Elisabeth Moss, Cara Delevingne, Ashley Benson, Gayle Rankin, Eric Stoltz, Amber Heard, Dylan Gelula, Agyness Deyn, Dan Stevens, and Virginia Madsen. Her Smell is a riveting and evocative film from Alex Ross Perry.

Stories about rock stardom and such often follow a formula in how they’re formed, how they become successful, more success, sex, drugs, alcohol, fights, they break-up, some tried to do solo careers, and then reunite. It’s a story that’s been told a million times yet what Alex Ross Perry does in this film is really the study of a singer whose love of rock n’ roll and excess would eventually takes its toll on herself, her family life, and her band. Notably as it’s told in five different scenes detailing the fall and resurrection of Becky Something (Elisabeth Moss) who is the singer/guitarist for the punk rock band Something She as there’s brief segments in between detailing the band’s rise. Perry’s script is more about Becky and her attempt to try and be this rock star as well as a mother despite the fact that she’s divorced and at odds with her ex-husband and her own mother. The five segments all play into Becky and her band in their good times but mostly bad times with the second and third segments showcasing Becky’s self-destructive behavior and how she destroys her relationships with those who care about her. The fourth and fifth takes places years after the events of the first three segments as it relates to what she lost but also her own fears.

Perry’s direction does have some style in its approach to long static shots as well as tracking shots in some parts of the film yet much of it is straightforward. Shot on various locations in New York City as well as the upstate area for one segment, the film play into these moments in time as the first segment is about a performance from Something She and its aftermath and the second segment is about a failed recording session that lead to the band’s break-up while a new band in Akergirls watch in horror. The usage of close-ups and medium shots don’t just add to the intimacy of some of the tension but also in how much Becky is willing to destroy herself and everyone else in her path just as some are trying to help her. Even as it would capture the chaos during a scene in the third act where Becky and Something She drummer Ali van der Wolff (Gayle Rankin) have an intense physical fight backstage.

There are a few wide shots in the film yet Perry chooses to focus on these moments that play into Becky’s wild behavior and her need to have answers whether it’s spiritual or as a way to maintain this persona as a wild punk rock star. There is a lot of attention to detail in what is going on with and around Becky as the dramatic tension that occurs such as a failed recording session that lead to the band’s break-up shows more attention towards Ali and bassist Marielle Hell (Agyness Deyn) who are struggling to keep it together but are aware that the band is done. By the time the film moves towards the fourth and fifth segments, things do quiet down as it play into Becky coming to terms with what she’s lost but also what she still has. Even towards the end as she tries to figure out if she has to play this wild persona or just be a mother to her daughter. Overall, Perry crafts an exhilarating yet intense film about a punk rock singer’s struggle to be all sorts of things including being a mother.

Cinematographer Sean William Price does brilliant work with the film’s cinematography as its usage of low-key interior lighting for some the backstage scenes and in some of the stage lighting as well as natural interior/exterior lighting for the segment at Becky’s home with some blurry flashes for some of the concert performances. Editor Robert Greene does excellent work with the editing as it is largely straightforward in letting shots linger for a while as well as providing a few rhythmic cuts for dramatic effect. Production designer Fletcher Chancey, with set decorator Paige Mitchell and art director John Arnos, does fantastic work with the look of some of the backstage area in some of the shows as well as the look of the studio and Becky’s home. Costume designer Amanda Ford does nice work with the costumes from some of the stylish clothes that the bands wear as well as the ragged look in their clothing.

Hair/makeup designer Amy L. Forsythe does terrific work with the look of the Akergirls in their colorful hairstyle as well as how they would evolve in the coming years in contrast to the chaotic look of Becky. Sound editor Ryan M. Price does amazing work with the film’s sound in the way music is presented live as well as the way music is recorded in a studio and other aspects of the sound as it plays into the chaos of Becky’s life. The film’s music by Keegan DeWitt and Alicia Bognanno is incredible with DeWitt providing a low-key ambient score for some of the dramatic moments of the film while Bognanno writes some of the original songs for Something She and Akergirls while music supervisor Rob Lowry provide a couple of songs that Becky sings including a song by Bryan Adams and one from Charles Manson.

The film’s superb cast feature some notable small roles and appearances from Daisy Pugh-Weiss as Becky’s daughter Tama, Hannah Gross as Tama’s stepmother Tiffany, Craig Butta as a studio recording engineer, Alexis Krauss as musician at the film’s final segment, Keith Poulson as Ali’s husband, Lindsay Burdge as Marielle’s partner, Eka Darville as a shaman who doesn’t seem to have Becky’s best interests, and Amber Heard in a small role as Becky’s former mentor Zelda E. Zekiel as a woman who is trying to help Becky to get her into the right path of life. The performances of Ashley Benson, Cara Delevingne, and Dylan Gelula in their respective roles as Roxie Rotten, Crassie Cassie, and Dottie O.Z. of the band Akergirls are fantastic as a new band who admire Becky as they see her as an influence only to realize how troubled she is to herself and to their own career. Eric Stoltz is excellent as the music manager Howard Goodman who manages both Something She and Akergirls as someone trying to maintain some control while starting to lose patience with Becky as he has a lot to lose with her drug abuse. Virginia Madsen is brilliant as Becky’s mother Ania as a woman who had seen Becky at her best and at her worst as she’s trying to help her but also knows when something horrible is to come.

Gayle Rankin and Agyness Deyn are amazing in their respective roles as Something She drummer Ali van der Wolff and bassist Marielle Hell as two women who are trying to keep the band together with the former as a drummer who is also wild but also in control until a major fight backstage while the latter is someone who is trying keep everything in control until she has had enough. Dan Stevens is incredible as Becky’s ex-husband Danny as a man who cares about Becky and their daughter yet is trying to get her help but also be there as a mother to their daughter. Finally, there’s Elisabeth Moss in a spectacular performance as Becky Something as the singer/guitarist for the band Something She as a woman just trying to be this wild persona and a mother to a young girl but is troubled by her drug abuse and need to control everything as it is Moss at her most energetic and most vulnerable as it is definitely the performance of her career.

Her Smell is a tremendous film from Alex Ross Perry that features a phenomenal leading performance from Elisabeth Moss. Along with its ensemble cast, fascinating character study, simplistic yet chilling presentation, and an energetic music soundtrack. It’s a film that explores a woman trying to balance responsibility and stardom but also destroy those including herself on her path as well as cope with everything she’s gained and lost. In the end, Her Smell is a sensational film from Alex Ross Perry.

Elisabeth Moss is so cool, I'm looking forward to seeing this movie.

Elisabeth Moss is so good in this. I always have such a moral dilemma watching her because I hate supporting scientoligists but she is just SO good.

Completely unrealistic that she would let go of someone as hot as Dan Stevens though. lol

Years ago, in one of the books he wrote as Richard Bachman, Stephen King had one character describe the self-destructive behavior of another as "like a starving man eating laxatives." I thought about that line a lot when I watched this, especially in the first three scenes.

I've been hearing good things about this one. And Moss is always great, so I need to check this one out.

@Paula-She is. I may not like the fact that she's a Scientologist but I still think she's an amazing actress.

@Brittani-I know a few people who are in Scientology that I do like though I wish they weren't associated with that lame-ass cult (the Dark Order is a better cult). Still, I do like Elisabeth Moss a lot.

@SJHoneywell-She is one of the best actresses working today. For a long time when Mad Men was on TV, everyone thought January Jones was going to have great things come to her after the show. Wrong... I remember Moss when she was in Girl, Interrupted and has been killing it since.

@Wendell-This is a film worth seeking out as I think it's on Cinemax right now as I was able to have it on my DVR before it was off HBO.

This film would make a great double bill with GEORGIA starring Jennifer Jason Leigh as they are both about uncompromising musicians. Moss delivered an astounding performance in this film. She really went for it and I admire her commitment to the part. I've been a fan of hers since GIRL, INTERRUPTED and she has only gotten better over the years. This feels like an authentic portrait of a musician struggling with their own inner demons.

@J.D.-That would be a great double-bill as I would totally be on board for that.