In the 49th week of 2020 for Wandering Through the Shelves' Thursday Movie Picks. We go into the subject of adaptations as films based on books have often create movies that are different from the books where they originated as it allows filmmakers to bring books to life but on their own terms. Here are my three picks of great adaptations by women directors of the 2010s:

1. We Need to Talk About Kevin 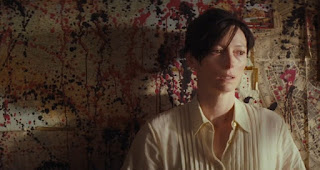 Lynne Ramsay’s adaptation of Lionel Shriver’s novel about a mother who deals with the fact that her son killed a bunch of kids in school and so much more is definitely one of the most unsettling films of the 2010s. Ramsay’s first film in nine years following an attempt to create a film adaptation of The Lovely Bones that got taken away by Peter Jackson who ended up creating a very shitty film on that book. Yet, Ramsay’s adaptation of Shriver’s novel plays more into themes of death but it’s more about the aftermath of death in which a woman copes with being ostracized for being the mother of a young killer as she reflects on her time as a mother and ponders what did she do wrong as it features a mesmerizing performance from Tilda Swinton as well as an eerie performance from Ezra Miller as Kevin.

Based on the real-life events that was covered in a famous article by Vanity Fair, Sofia Coppola’s film about a group of young Hollywood kids who break into the mansions of some famous people to steal some of their belongings and such is a study of these kids wanting to belong in this rich and posh culture. Yet, the film also showcase this air of disconnect that these kids have with the real world and in their actions with some being remorseful for what they did while others want to enjoy this newfound notoriety. It is one of Coppola’s more accessible films but also a critique on celebrity culture and people’s fascination with a culture that praises people who don’t deserve to be famous. 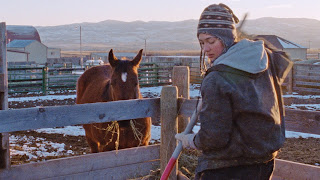 Kelly Reichardt’s film that is based on a trio of short stories by Maile Meloy is an exploration of the lives of four women in a small town in Montana. The film revolves around the life of a lawyer trying to deal with a troubled client, a housewife and mother whose plan to create her new dream home reveal cracks in her marriage, and a night-school teacher who bonds with a lonely ranch hand who is eager to seek some connection. It is a film where not much happens as it’s more about women reacting to their situations and the environment around them as it is told with such richness and realism from a true artist like Reichardt.

I've heard of the first two but only seen Kevin. I respected the skill with which it was put together and performed but it was both unsettling and unpleasant. I'm sure that was the goal but it just isn't something that I think of as entertainment.

The last is new to me but sounds interesting.

I decided that since this was open to interpretation I’d go with stage to screen adaptations. I limited myself to ones where I had seen both the film and a production of the play on Broadway.

Into the Woods (2014)-Adaptation of the Sondheim musical reimaging of classic fairy tales-Rapunzel, Cinderella, the Baker & His Wife etc.-with an impressive cast (Meryl Streep, Chris Pine, Tracey Ullman among others) is enjoyable but misses the magic of the stage production despite CGI and the utilization of location shooting. I saw this in 1988 at the Martin Beck Theatre, though Phylicia Rashad had by that time replaced Bernadette Peters who had originated the role of the Witch.

Gypsy (1962)-Star powered (Rosalind Russell, Natalie Wood and Karl Malden in the leads) filmization of the classic stage play based on the memoirs of ecdysiast Gypsy Rose Lee growing up in the shadow of her more talented sister June and her fearsomely aggressive stage mother Mama Rose that Ethel Merman made legendary when it opened in 1959 with a score by Jules Styne & Stephen Sondheim. I saw the 2003 revival with Bernadette Peters as Mama Rose at the St. James Theatre.

MacBeth (1948)-Moody expressionistic take on the Shakespeare “Scottish Play” about the price of unfettered ambition and lust for power by a courtier (Orson Welles) and his rapacious wife (Jeanette Nolan). I saw the production starring Christopher Plummer (he was very good) and Glenda Jackson (she was electrifying!) at the Mark Hellinger Theatre in 1988.

Love that you went w/ women directors!! I have only seen two out of the 3 you listed. Man I really need to see We Need to Talk About Kevin as I like Tilda Swinton. Certain Women is a film I appreciate but not love, but the acting is really good all around.

We Need to Talk About Kevin is a tough, tough watch. It's really good, but I don't think I'll put myself through that anymore. I liked, but didn't love The bling ring. I haven't seen your other pick.

I love your first two picks! I tried to like Certain Women but I felt like I only enjoyed half of the movie.

I was not a fan of We Need to Talk About Kevin. While I agree that it's well made and the performances are good, it's one that makes me uncomfortable. I live in a town that had a mass shooting about a decade ago, and have a friend whose son survived a school shooting. Some movies are going to miss not because of the film, but because of the audience.

The only one of your picks I saw is Bling Ring and I didn't like it. Everybody in that movie was sooo annoying lol.

I wasn't a huge fan of The Bling Ring but my taste in films sucked back then, hence I've been meaning to give it another chance. I haven't seen the other two but I really want to see We Need to Talk About Kevin. It's been on my list forever.

I heard of The Bling Ring but never felt the desire to see it..maybe one day. The other 2 sound good but the first sounds just so sad and unsettling.