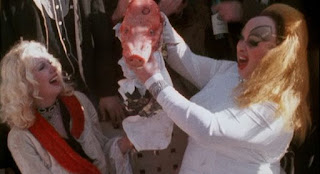 Written, directed, shot, edited, and narrated by John Waters, Pink Flamingos is the story of a criminal who proclaims herself to be the filthiest person alive as she is confronted by a couple of other criminals who want to out-do her in terms of filth. The film is an exploitation and offbeat comedy that explores the idea of what is obscene as it is more of an exercise in poor taste as it confronts the idea of how much filth someone can take. Starring Divine, Edith Massey, Mary Vivian Pierce, David Lochary, Mink Stole, and Danny Mills. Pink Flamingos is a grotesque, revolting, and hilarious film from John Waters.

The film revolves around a feud over the idea of who is the filthiest person in the world as a drag queen was given that title by a local tabloid which upsets a couple who wants to that title. It’s a film that doesn’t have much of a plot as it plays into the exploits of this drag queen who lives in a trailer under an alias with her mentally ill mother, a delinquent son, and her traveling companion as they do gross things while pushing the boundaries of what is obscene as John Waters’ screenplay isn’t just this study of filth but also what a few people will do to outdo the ideas of filth. Notably as this couple in Connie and Raymond Marbles (Mink Stole and David Lochary, respectively) are appalled by the antics of Divine aka Babs Johnson (Divine) who does disgusting things but not into the realm of something evil that the Marbles do as they kidnap young women for their servant Channing (Channing Wilroy) to rape and impregnate so they can sell babies to lesbian couples. Yet, the Marbles do whatever they can to try and humiliate Divine and her family but are unaware that Divine can do much worse.

Waters’ direction has a crudeness not just in its look and low-budget aesthetics but there’s also something that feels real as well in the way he captures the life of these unique characters. Shot on location largely in Phoenix, Maryland as well as parts of Baltimore, Waters does aim for straightforward compositions while also infusing a few tracking shots such as a scene where Divine walks in the city as a car is filming her in a wide-medium shot. Serving as the film’s cinematographer, Waters doesn’t go for any kind of stylish lighting as much of the film is shot in the day with a few scenes at night where Waters maintains a looseness to the presentation with hand-held cameras as well as this air of improvisation that gives the film an air of realism. Even in scenes that play into the extremity of what is decency and obscenity such as Divine’s son Cracker (Danny Mills) having sex with a woman along with a chicken. Also serving as editor, Waters keeps much of the cutting straightforward while he also provides narration as an off-screen character enjoys the crude antics of Divine.

Waters also does go into these ideas of offbeat behavior as Raymond is someone that likes to flash people while having a kielbasa or a piece of meat attached to his penis. Even as he is willing to break taboos that includes a contortionist who does trick with his asshole that is just disgusting to watch yet it also intriguing to watch. Even as the boundaries of what is obscene gets pushed further into the film’s third act that includes this eventual confrontation between Divine and the Marbles. All of which plays into the idea of who is the filthiest person in the world where Waters would have one more thing for the finale to up the ante of what is repulsion. Overall, Waters crafts a filthy, disgusting, and fucking hilarious film about a drag queen battling a couple of assholes for the title of the filthiest person in the world.

Production designer Vincent Peranio does excellent work with the look of Divine’s trailer as well as the home of the Marbles with their posters and kitsch furniture. Costume designer/makeup artist Van Smith does fantastic work with the look of Divine as well as the dresses that she wears. Sound recordist Bill Porter does terrific work with the sound as it is straightforward in playing up to the locations and the atmosphere in a scene including the party scene. The film’s incredible music soundtrack as it features pieces from Little Richard, Link Wray, the Centurions, LaVern Baker, Bill Haley & His Comets, the Nighthawks, the Tyrones, the Trashmen, Patti Page, the Robins, Frankie Lymon & the Teenagers, and the Tune Weavers as it help play into the film’s offbeat tone.

The film’s casting is superb as it features appearances from David E. Gluck as the contortionist, Elizabeth Coffey as a person Raymond would flash at, Susan Walsh and Linda Olgierson as a couple of women the Marbles kidnap for Channing to rape and impregnate, Pat Moran (in a deleted scene in the 1997 reissue) as a friend of Divine in Patty Hitler, Steve Yeager as a news reporter, Paul Swift as the egg man that Edie loves, Channing Wilroy as the Marbles’ servant who rapes and impregnate kidnapped women, and Cookie Mueller as a woman the Marbles hire to spy on Crackers and have sex with him. Edith Massey is fantastic as Divine’s mentally-ill mother Edie who eats nothing but eggs as well as sit inside a little playpen while Danny Mills is terrific as Divine’s son Cracker who likes to fuck chickens and do perverse things. Mary Vivian Pearce is excellent as Divine’s accomplice/friend Cotton as a woman who not only enjoys perverse content but also do whatever she can to deal with the Marbles.

Mink Stole and David Lochary are amazing in their respective roles in Connie and Raymond Marble as this perverse and evil couple who like to kidnap women for their servant to rape with Stole sporting bright orange hair and Lochary with blue hair as they do whatever to try and outdo Divine. Finally, there’s Divine in a tremendous performance as Divine/Babs Johnson as a drag queen who is known for being outrageously filthy and disgusting where Divine just adds a lot of charisma to a role that demands a lot of that where Divine plays up this larger-than-life character as it is a definitive performance from the late drag queen.

Pink Flamingos is a phenomenally revolting film from John Waters. Featuring a great cast lead by Divine, a fun music soundtrack, a crude yet engaging look, and its willingness to be offensive and disgusting. It is a film that isn’t afraid to be outlandish but also unafraid to be ridiculous in its offbeat and crass humor. In the end, Pink Flamingos is a sensational film from John Waters.

"Phenomenally revolting" pretty much sums it up. Not sure I need to see this again, but I get exactly what Waters was going for, and I support that completely.

I like Waters a lot, but I haven't pulled the trigger on Pink Flamingos, yet. I heard about the dogshit eating scene and, found out that it was real, so I just haven't worked up enough courage to go down that road yet. Maybe one day.

@SJHoneywell-I don't know if I will see it again but I definitely had a blast watching it. I love John Waters and it's a shame he's not making movies anymore because of funding.

@Wendell-I don't blame you for having the courage to watch it as I knew it was coming and blech... still wasn't prepared for it. That was disgusting but I'd still rather see that than anything by Michael Bay. Still, this was easier to take than... Salo as I still haven't re-watched and I don't think I'd want to.