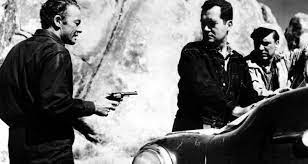 Directed by Ida Lupino and written by Lupino and Collier Young from a story by Daniel Mainwaring and adapted by Robert L. Joseph, The Hitch-Hiker is the story of two friends who pick up a hitch-hiker unaware that he’s a sociopath who has taken them hostage as the two friends try to escape from this man. Based on the real-life killing spree by Billy Cook as it is a suspense drama that play into two friends who deal with the presence of a man who is intent on bringing fear. Starring Edmond O’Brien, Frank Lovejoy, and William Talman. The Hitch-Hiker is a riveting and chilling film from Ida Lupino.

The film is about a hitch-hiker who is on a killing spree as he kills those who pick up him as he is then picked up by two men who are in Mexico on a fishing trip as they become aware of who they just picked up as they cope with the situation they’re in. It is a film with a simple premise as it play into these two men who find themselves picking up a sociopath with a gun as he orders them to do thing they’re not comfortable with in a land where barely anyone speaks English. The film’s screenplay by Ida Lupino and Collier Young is straightforward yet it opens with a montage of the series of murders committed by Emmett Myers (William Talman) who kills his victims whenever they resist, take their money, and their car until the car runs out of gas and then hitch-hikes to be picked up by anyone else who would become victims.

For Roy Collins (Edmond O’Brien) and Gilbert Bowens (Frank Lovejoy), picking up Myers and then realizing who he is would be a decision these two men have to cope with. Even as they realize how controlling he is and how they can’t even escape whenever they’re sleeping as it adds to the dramatic suspense. There is also a subplot involving U.S. and Mexican police forces trying to find Myers as well as discovering that Collins and Bowens are taken hostage as the Mexican police would ask locals as it would lead to some major discoveries.

Lupino’s direction does bear some style from the opening sequence of images of faceless victims lying dead as well as stock footage of police cars on the chase as it play into the severity of the situation that Collins and Bowens are to face. Shot largely on location in desert areas in California, Lupino does use some wide shots to play into the scope of the locations yet maintains a simplistic approach to play into the sense of terror that occurs in the film through medium shots and close-ups. Lupino’s usage of medium shots for the scenes of the three principle characters in the car doesn’t just play into the suspense along with scenes outside the car where Myers is often seen from the overhead looking at Collins and Bowers sleeping on their sleeping bags as the two men watch in fear.

Lupino also uses the locations such as the desert to play into the setting that is unforgiving as it adds to the drama where Myers maintains a sense of control while Collins and Bowers are dealing with injuries, lack of resources, and being threatened with death. Even in scenes set in the night as it play into the suspense that include the film’s climax as it relates to the destination that Myers wanted to go into as adds to the tension. Notably as it play into Myers being this man of threat and treating Collins and Bowers horrifically to the point that the two men deal with the fact that he is a madman that needs to be stopped. Overall, Lupino crafts a gripping and unsettling film about two men who are taken hostage by a scary hitchhiker.

Cinematographer Nicholas Musuraca does excellent work with the film’s black-and-white photography as it play into its low-budget aesthetics with its somewhat-grainy presentation that does add to the sense of terror and realism into the film for much of the exterior scenes in the day and night. Editor Douglas Stewart does brilliant work with the editing with its usage of rhythmic cuts to play into the suspense along with bits of transition wipes and dissolves to add to the drama. Art directors Albert S. D’Agostino and Walter E. Keller, with set decorators Harley Miller and Darrell Silvera, do fantastic work with the look of the grocery stores and cantinas that the three men stop at as well as the gas station and the port in the film’s climax.

The sound work of Roy Meadows and Clem Portman is superb for the atmosphere of the locations as well as the sounds of gunfire and such that add to the suspense. The film’s music by Leith Stevens is amazing for its soaring orchestral score that play into the suspense and sense of terror with loud and bombastic strings as it adds to the film’s unsettling tone.

The film’s wonderful ensemble cast feature some notable small roles from radio announcer Wendell Niles as himself, Jean Del Val as an inspector, Clark Howat as a government agent who works with the Mexican authorities, Natvidad Vacio as a man named Jose who gives Myers the name of a boat he can use, and Jose Torvay as Captain Alvarado as the leader of the Mexican police in the search for Myers. Edmond O’Brien and Frank Lovejoy are incredible in their respective roles as Roy Collins and Gilbert Bowen as two men who are going on a fishing trip until they pick up Myers where they deal with their situation as well as try to escape with O’Brien as the more sensible Collins who is able to speak Spanish while Lovejoy as the latter is a skilled mechanic who would also deal with the brunt of Myers’ physical abuse. Finally, there’s William Talman in a phenomenal performance as Emmett Myers as this sociopathic serial killer who hitch-hikes his way to Mexico as he brings terror to these two men as well as being someone that isn’t a fool while can also do things to instill fear as he is one of the most chilling figures to ever grace the cinema.

The Hitch-Hiker is a tremendous film from Ida Lupino that features great performances from William Talman, Edmond O’Brien, and Frank Lovejoy. Along with its eerie visuals, minimalist premise, a haunting music score, and its sense of terror, the film is definitely a neo-noir film that doesn’t play by convention while being a study of two men being held hostage by a madman. In the end, The Hitch-Hiker is a spectacular film from Ida Lupino.

@Jay-Thank you. I hope more people seek out the films of Ida Lupino as I have 3 more on Blu-Ray and one on DVR to watch.

Your film knowledge is astounding! I hadn't heard about this one and not that familiar w/ Ida Lupino's work, so definitely a good subject for Blind Spot series. Picking up a hitchhiker who's a sociopath just sounds absolutely terrifying!

This is a terrific film. Ida's direction is wonderfully lean and she gets fine performances from her three main performers (not surprising often actors are able to elicit strong work from others since they understand the craft). Considering the slight budget she uses every cent of it wisely.

@Ruth-I only knew about her as a filmmaker a few years ago and I finally got a Blu-Ray box set of her work a few months ago hoping that I would get something out of it as I want to do whatever I can to get people to discover something many probably haven't seen. Especially from women filmmakers.

@joel65913-This was impressive as I hope to get through all of her films for a future Auteurs piece on her in the future.