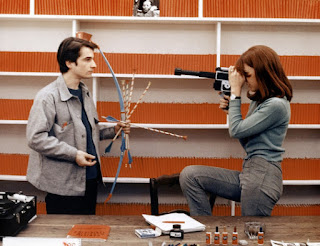 Another year is coming to an end as this year's Blind Spot Series is set to close with Pedro Costa's Letters from Fonthainas trilogy as it was better than the previous year due to the fact that I was able to watch films that were available on streaming services or on DVD/Blu-Ray. The next year will be no different but once again, I decide to mix things up as all of these films are set in the second half of the 20th Century. This time, no more film series or trilogies for the time being with the exception of one film being a TV miniseries. Rather than have all of the films be from the Criterion Collection as it was difficult to obtain some of these films on DVD/Blu-Ray. I decided that the 2023 edition will have films as half of them are available on Criterion as so far I have 4 of those films for next year's series. Then there's other Blu-Ray labels and such but also films available on various streaming services as I am set to leave the world of cable television for good and more into the unknown of the streaming world. Once again, I wanted to mix things up in not just genres but also in diversity as two of the Blind Spots are films directed by women. Here are the films for the 2023 Blind Spot Series in chronological order:


The Quiet Man by John Ford

The Seduction of Mimi by Lina Wertmuller

Buck and the Preacher by Sidney Poitier

I'm not sure if I'll participate in the Blind Spot series as I haven't thought of a list. The only one I've seen is Kiki's Delivery Service by Hayao Miyazaki which I absolutely adore!!

@ruth-I'm trying to just go into films that I'm sure are available on streaming services and such though I'm glad a lot of them are available as I don't want to go through past experiences of having to find them through torrents and such as I hate watching films on my laptop. I prefer to watch them on a big TV.

Aww I love Kiki's Delivery Service! It's so sweet. Easily in my Top 5 Ghibli.