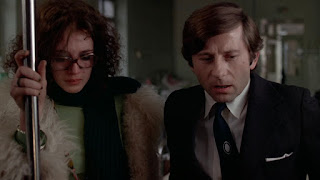 Based on the novel by Roland Topor, The Tenant is the story of a man who rents an apartment in France unaware that its previous tenant had attempted suicide though he believes that something is strange is happening involving its neighbors and landlord. Directed and starring Roman Polanski and screenplay by Polanski and Gerard Bach, the film is the third film in a thematic trilogy set in apartments where it plays into a man dealing with his surroundings as well as people trying to get him to kill himself. Also starring Isabelle Adjani, Melvyn Douglas, Jo Van Fleet, Rufus, and Shelley Winters. The Tenant is a riveting and provocative film from Roman Polanski.

The film is the story of a man who rents an apartment as its previous tenant had attempted suicide where the man believes that it wasn’t a suicide as he deals with his elderly neighbors and landlord who make complaints about him while he is baffled by these little complaints. It’s a film that explores a man who just rented this apartment unaware about what happened to its previous tenant as he believed something isn’t right as he grows into paranoia. The film’s screenplay by Roman Polanski and Gerard Brach is largely straightforward in its narrative yet it largely follows the life of its protagonist Treklovsky (Roman Polanski) who arrived in the apartment looking for a place to live as he sees that this apartment has a room opened though the apartment’s landlord Zy (Melvyn Douglas) is reluctant to take him but does under certain conditions. Still, Treklovsky often finds way to agitate other tenants including Zy though he doesn’t mean to while also refusing to sign the petition against a tenant because of the noises her child makes.

The script also has Treklovsky befriend Stella (Isabelle Adjani) who is a close friend of the previous tenant who had died as the two begin a relationship even though she never visits the apartment her friend was in. Treklovsky would learn that the tenant had indeed died from her injuries yet he would also notice little things in his apartment such as a tooth but also the fact that he switched cigarette brands from Gauloises to Marlboro. It adds to these little things that would play into Treklovsky’s psyche as he also believes he’s becoming his previous tenant due to the fact that he’s putting on finger polish and dressing up like a woman.

Polanski’s direction is definitely stylish for the way he uses the crane tracking shot as the opening shot has him going inside the center of the apartment building in Paris to showcase the rooms and other tenants as the building itself is a character in the film. Shot on location in Paris, Polanski does play into a city that is vibrant but also going through changes where the apartment building itself is filled with an eccentric group of people with much of the tenants being elderly including Zy and the concierge (Shelley Winters) running the place as they don’t want any trouble or chaos. Yet, Polanski maintains an intimacy through medium shots and close-ups to play into the dramatic tension as well as the paranoia that Treklovsky would go through. There are wide shots for some scenes in Paris including a scene at a park where Treklovsky is watching kids sailing their toy boats on a fountain where he would act strangely towards a child. Polanski also play into certain visual motifs where mirrors are all over his apartment as it would add to this sense of paranoia that Treklovsky would endure.

Polanski would also play into this world where the city is vibrant where Treklovsky would meet some of Stella’s friends though there is this air of isolation within him as the life outside of the apartment building where his co-workers and the people in his age group or younger are thriving. Still, Polanski would also play into this blur of reality in its third act as it relates to Egyptian imagery that Treklovsky would find in the apartment’s main bathroom as well as a postcard from a man who was in love with the previous tenant. The third act plays into Treklovsky’s paranoia as it relates what he watches as it relates to a couple of tenants whom many have been complaining about where Treklovsky becomes the target. The film’s ending is ambiguous into what Treklovsky experiences as it adds to this idea of reality and fiction as well as his own brief encounter with the previous tenant. Overall, Polanski crafts a mesmerizing and offbeat film about a man who finds himself troubled in a new apartment he bought as well as learning about its previous tenant.

Cinematographer Sven Nykvist does incredible work with the film’s cinematography with its emphasis on low-key lights for many of the nighttime interior/exterior scenes in the apartment as well as its emphasis on cold grey winters for the daytime exterior scenes as it is a highlight of the film. Editor Francoise Bonnot does brilliant work with the editing as it play into the suspense with some unique jump-cuts and other rhythmic cuts that help add to the sense of terror. Production designer Pierre Guffroy, with art directors Claude Moesching and Albert Rajau, does amazing work with the look of the apartment building in its interiors including Treklovsky’s apartment as well as the apartment home of Stella. Costume designer Jacques Schmidt does fantastic work with the costumes from the suits that Treklovsky wears along with some of the fashionable clothing that Stella wears.

Hair stylist Didier Lavergne and makeup artist Ludovic Paris do terrific work with the look of Stella with her hairstyle but also Treklovsky when he goes in drag and wear women’s clothing. Optical effects work by Jean Fouchet does nice work with some of the shots including a key shot late in the film as it play into the terror that Treklovsky would endure. Sound editor Michele Boehm does superb work with the sound as the way noise sounds from another room and such add to the dramatic suspense. The film’s music by Philippe Sarde is wonderful for its orchestral score that feature themes that play into its suspense with its orchestral flourishes as well as somber pieces that play into the drama.

The casting by Catherine Vernoux is marvelous as it feature some notable small roles from Albert Delby as a neighbor in the apartment, Eva Ionesco as the disabled daughter of a neighbor that Treklovsky helps out, Jacques Monod as a café owner who often gives Treklovsky hot chocolate instead of coffee and Marlboros instead of Gauloises, the trio of Josiane Balasko, Romain Bouteille, and Patrice Alexsandre as co-workers of Treklovsky, Bernard Fresson as a friend/co-worker of Treklovsky in Scope who gives him advice about dealing with the neighbors, and Rufus in a superb small role as a man who was in love with the previous tenant who laments over not expressing his love to her. Lila Kedrova is fantastic as Madame Gaderian as a woman who has a disabled daughter that is getting complaints as she despises her neighbors for being mean to her while she has her own idea of revenge.

Shelley Winters is excellent as the concierge who is a no-nonsense woman that helps run the apartment building though she doesn’t take a liking towards Treklovsky believing he’s causing a lot of trouble. Jo Van Fleet is brilliant in her brief yet effective role as a tenant in Madame Dioz who has created a petition to get rid of Madame Gaderian which Treklovsky refuses to do as she warns him about the trouble she and the others would bring to him. Melvyn Douglas is incredible as Monsieur Zy as the landlord who reluctantly takes Treklovsky in as a tenant while lecturing him about what to do as he brings a lot of ambiguity into his character. Isabelle Adjani is amazing as Stella as a friend of the previous tenant as she befriends Treklovsky that later becomes a romantic relationship as she is this young woman that is just trying to make sense of what happened. Finally, there’s Roman Polanski in a phenomenal performance as Treklovsky as this young man who rents this apartment as he deals with all of the chaos around him where he becomes paranoid and confused where Polanski brings that sense of humility in his physical performance but also some humor when he starts to camp it up in drag.

The Tenant is a sensational film from Roman Polanski that features great performances from Polanski, Isabelle Adjani, Melvyn Douglas, Jo Van Fleet, Rufus, Lila Kedrova, and Shelley Winters. Along with Sven Nykvist’s cinematography, its eerie visuals, chilling music soundtrack, and its exploration of isolation and paranoia in a claustrophobic setting. It is a film that explores a man dealing with his new surroundings while trying to figure out what happened to the previous tenant as he wonders is it really happening to him or is it in his head. In the end, The Tenant is a phenomenal film from Roman Polanski.

This is one of Polanski's more interesting movies. His Apartment Trilogy really is his best eork. Hard to pick the best of three damn good movies.

I've never seen this, and I feel like if I revisited a Polanski film again at any point, it would probably be Rosemary's Baby. Shame it sounds goods.

@SJHoneywell-I agree as this was great although I think it's the weakest of the three films in that trilogy but it has a lot of incredible moments. He just knows how to create suspense and dark humor.

@Brittani-I would totally seek this out as it is one of Polanski's best films. Yes, what he did in his personal life was wrong and he's owned up to it though it's easy to forget that he did everything asked by the authorities until a fame-whore judge fucked it all up for everyone forcing Polanski to flee the U.S. as he was to be given a sentence that would've made everything else R. Kelly did like a walk in the park.