Originally Written and Posted at Epinions.com on 8/3/05 w/ Additional Edits. 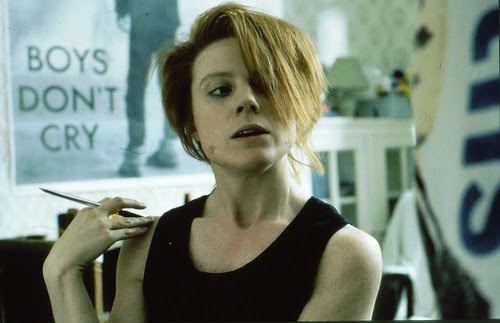 One of Britain's most beloved and respected filmmakers, Mike Leigh has always made films that often surround the dysfunctions of families and individuals in working class surroundings. With films like High Hopes, Life is Sweet, Naked, and his 1996 Palme D'or-winning masterpiece Secret & Lies that gave him his greatest international success including nabbing several Oscar nominations. The success of Secret & Lies expected some of his fans and critics to come up with something more ambitious. Instead, Leigh decides to go back to basics for a low-key affair in a drama about two women reuniting to discuss their own lives today while thinking about their years as college students in Career Girls.

Written and directed by Mike Leigh, Career Girls in comparison to previous and later films is more simplistic in its plot of two women reuniting in London for a weekend to reminisce their college years. In Leigh's approach, he films two different sections of the film. One part set in the mid-1980s during the two women's years in college and the mid-90s as those two women are wiser but still unsure of themselves in what they want. Starring longtime Leigh collaborator Katrin Cartlidge and Lynda Steadman plus Andy Serkis, Kate Byers, Mark Benton, and Joe Tucker. Career Girls is a witty, intelligent, warm film from the always-interesting Mike Leigh.

On her way to London for the weekend to search for a new home, Annie (Lynda Steadman) is ready to meet up with her old college roommate Hannah (Katrin Cartlidge). Annie remembers the day she meets Hannah during an interview for a new roommate while attending North London Polytechnic as a psychology student. Annie was then, shy, nervous, and having a facial rash was accepted by the more aggressive, high-energy Hannah and her roommate Claire (Kate Byers). Annie moves in but is forced to contend with Hannah's confrontational attitude though the two share a love for the books of Emily Bronte and the music of the Cure.

Annie arrives in London to see Hannah, who is now a businesswoman, as the two talk about their days as Hannah seems a bit more calm while Annie is now more confident in her looks yet has a hard time trying to relax. Hannah though is more self-absorbed in her work and rarely has time for romance though Annie had been more successful despite breaking with her recent boyfriend. The two then remembers their days one night as the time Hannah and Annie try to kick out Claire, who rarely does anything in the house only to find themselves kicked out. They ended up living in a smaller apartment in which they shared with one of Annie's fellow psychology students named Ricky (Mark Benton), who is a mentally-challenged but intelligent fellow.

While Ricky makes good company, his outbursts would often lead into heavy discussions with Hannah about politics and morals where her opinions would end up being hurtful as Ricky would be verbally abusive sometimes. Annie remembers that her friendship with Ricky had its moments but was also a mess as one day, she and Hannah tried to find Ricky. Back in present time, Hannah and Annie go apartment-shopping when they find a flat that's owned by a messy man named Mr. Evans (Andy Serkis) that is near a river while it's up high at the floor, something that Annie doesn't like since she hates heights. The meeting was a nightmare because of Mr. Evans' messy rooms and flirtatious attitude as the two women run away. They find another flat that's on the floor where they meet real estates agent Adrian (Joe Tucker).

Annie and Hannah at first don't recognize Adrian until they got a clear look at him though he recognized Hannah but doesn't remember Annie. The two women look back at their relationship with Adrian during the time they stayed in the apartment with Claire. Hannah and Adrian hit it off at first because of their brash, antagonistic attitudes but when Adrian meets Annie, there is more of an attraction there in which, makes Hannah a bit more uneasy. After the disastrous sale, Hannah and Annie talk about Adrian and how they've changed. On the day when Annie is to return home via train, they decide to take a look at their places where they not only see an old friend running in a park but at the place when they last lived together, they meet an old friend which reminded them about their own past and regrets.

While the film doesn't have the heavy melancholia or the dysfunctional dramatics of other films from Mike Leigh. There is a clear idea on who is writing and who is directing it since Leigh does have his own unique ideas on dramas and relationships that has a bit of sadness and humor. From a directing standpoint, Leigh gives the film two different ideas in terms of its look and style since the film is done mostly in non-linear style with the women looking back at those times. Yet the story doesn't lose its place since it's easy to follow along to know where the characters are. There's also an earnest and nostalgic feel to the movie as Leigh seems to harken back to his early days as a filmmaker which is why he went for something more simple as opposed to the more ambitious projects of other films.

Even in the writing, Leigh gives depth all of his characters, notably Hannah and Annie where they have a lot to offer in terms of character development. There's similarities of both women in the past as they're both insecure in some way, they have a love for novels and the Cure, they're intelligent, and they're also flawed in many ways. The Hannah and Annie of the mid-90s are not as different although they have grown. Though they're not as insecure, there's an assurance that they're still struggling to find love or to find some kind of peace while understanding more about themselves and the past. Even in the way they are from their backgrounds, they understand why they're the way they are. It's that kind of writing that makes Mike Leigh one of the more respected and heartfelt auteurs in cinema.

Leigh's longtime cinematographer Dick Pope also helps Leigh in shaping the film in terms of look. While the 1980s sequence of the film has a blueish, grainy look, the mid-90s sequences is more colorful with its rare shots of sunlight. Art director Helen Scott also helps out with the look of the film with costume designer Eve Stewart as the 80s was more messy in its look of black clothes, jeans, and posters on the wall. While the 90s is more clean and glossy. Editor Robin Sales gives the film a nice, plaintive rhythm in its non-linear style while not making it too slow or too fast in its 87-minute running time. The film’s music which includes an original score from Secret & Lies star Marianne Jean-Baptiste and Tony Remy is plaintive in its contemporary, acoustic style while Leigh does a wonderful job in his selections of songs by the Cure that included singles like The Walk, Let's Go To Bed, The Love Cats, Caterpillar, and other rare album cuts that gives the film a nice sign of nostalgia.

The film's small cast that included Kate Byers as the bratty roommate Claire and Joe Tucker as the brash Adrian are well-performed, especially when Tucker is more quiet in the 90s sequence. Pre-Gollum Andy Serkis gives the film's most hilarious performance as the messy man who is willing to sell his apartment while trying to flirt with Hannah and Annie. Mark Benton is brilliant as the intelligent but dysfunctional Ricky who seems to be nice at times but his character is a sad mess since he's struggling with his own illness and his own life as he gives a memorable performance.

Lynda Steadman is a wonderful delight as Annie as she starts out looking a bit like Nicole Kidman with her shiny, short red hair with her troubling, realistic performance of a nervous young woman who lacks self-esteem. Steadman in the present time, her performance is also delightful as she makes her character grow so easily while admitting to some flaws while carrying a sense of innocence and charm. The late Katrin Cartlidge is also amazing as the more aggressive Hannah who is definitely hiding something as she uses her hand to sometimes talk. In the present time, we see Cartlidge be more calm but with a bit of aggression while dealing with her loneliness. The chemistry of Steadman and Cartlidge is amazing to watch, whether they're having a good time together in both sequences while in the 80s, you see Steadman standing her ground to the more aggressive Cartlidge as the two women give amazing, masterful performances.

While the film didn't get the same reaction like Secret & Lies did, the film did get good notices from fans and critics of Leigh who got a nice break. Leigh would continue to push his creativity further in films like Topsy-Turvy, All or Nothing, and more recently, his Oscar-nominated, Vera Drake that won him the Golden Lion at the 2004 Venice Film Festival. While Career Girls is a nice, low-key film from Mike Leigh with the wonderful performances of Lynda Steadman and the late Katrin Cartlidge. It's a decent starting point for audiences new to Leigh though Secret & Lies and Naked are better introductions. Still, Career Girls offer something more than the typical dramas that involve the conventional female buddy films.

...just discovered this film (hey, I live in the back waters of Canada) and was very impressed. It really resonated with me (male that I am!) and though I've enjoyed other films by Mike Leigh, I felt the chemistry of the the two leads in this outing was special.

Well, I'm glad you liked it. Thanks for commenting.