Originally Written and Posted at Epinions.com on 11/9/05 w/ Additional Edits. 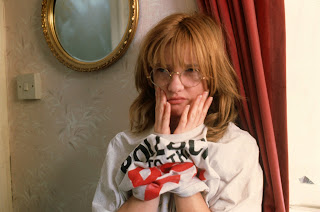 After the international success of 1989's High Hopes, British director Mike Leigh finally broke through to the film scene after years of TV work and overlooked films. With his unique approach of making films without a script while taking a cynical though hopeful view of post-Margaret Thatcher rule in the U.K. Leigh often explores the working class of the U.K. while not sugar-coating things like in traditional Hollywood films or the mainstream attempts made by other U.K. directors. In 1990, Leigh decides to make another film about post-Thatcher working class world about a family struggling day-to-day with the majority acting upbeat while dealing with friends and an anorexic daughter in Life is Sweet.

Written and directed by Leigh, Life is Sweet is about a chef and his wife living in a working class lifestyle in the Enfield area while taking care of their twin adult daughters. With the chef's dream of owning his own food stand ready to come true to the dismay of his wife and children, the wife takes another job in being a waitress to a friend's gourmet restaurant. While one of their daughters is a tomboy working as a plumber's apprentice, the other is an antisocial, anti-conventional girl with an eating disorder and a secret lover who is forced to do unconventional ideas of sex. Starring Leigh regulars Jim Broadbent, Alison Steadman, Stephen Rea, Timothy Spall, Claire Skinner, David Thewlis, and Jane Horrocks. Life is Sweet is a warm, delightful and realistic comedy-drama about a family trying to live day-by-day.

It's a nice Sunday in the London suburb of Enfield as a working-class mother Wendy (Alison Steadman) and her chef husband Andy (Jim Broadbent) spend the entire day with their 20-something twins. Natalie (Claire Skinner) is a tomboy who hopes to visit America in the future while her twin sister Nicola (Jane Horrocks) is a self-destructive, anti-conventional, anti-social young woman who couldn't stand to be around her family. Later that day, Andy's friend Patsy (Stephen Rea) visits to show Andy something though Wendy, is convinced that it's another scam. Though she is upbeat in her surroundings, even in her two-job lifestyle selling clothes to infants and running a day care for children. Wendy is hoping to just have a nice day while talking to Natalie about her lifestyle as a tomboy.

Later that day, family friend Aubrey (Timothy Spall) arrives with a pineapple to talk about the opening of his new gourmet restaurant. When Andy returns home with a beat-up trailer that used to be a food stand, Wendy and the kids are shocked. Andy though, is very happy that a chance for his dream in running his own food stand and working independently is finally coming true as he gives Patsy a huge thanks. With him and Wendy coming to see Aubrey's new restaurant, Aubrey is happy that his dream is finally coming until he learned that his waitress has quit on him to go on a trip to Prague. Wendy decides to help him as a waitress for the opening night, which is the next day while Andy gives him his full support.

After another day of work where Natalie works as a plumber's assistant saving her money for her trip to America, Nicola receives an unexpected visit from her secret lover (David Thewlis). Convinced that she is fat, though in reality looks gravely thin, she asks her lover to have sex with her while she's tied up and covered in jam. Wendy dresses up to serve as waitress as she and Aubrey's chef Paula (Moya Brady) is getting ready for opening night. The evening becomes a disaster as no one shows up leaving Aubrey drunk and Paula a bit distraught. Wendy's night is worse when Andy returns home drunk after drinking in a pub with Patsy as the two talk about what's going to happen next.

Andy apologizes about that night though he still plans to meet Patsy in a pub while helping out Aubrey before going to work as Wendy decides to sit out for the day. Nicola spends another day with her lover but his frustration over her unconventional tactics has gotten to him. With Wendy spending the day to clean her home, she has a heart-to-heart with Nicola about her behavior and pities her though Nicola doesn't want anything only to break down after the conversation. If Wendy's family problems weren’t bad enough, Andy gets injured leaving the entire family to realize what they have to do next.

Noted for working without a script, many of his films often have an improvisational feel in terms of dialogue and performance. Life is Sweet is no exception though in Leigh’s observant direction, he definitely does tell a story about a dysfunctional family trying to keep their feet on the ground while remaining optimistic, with the exception of Nicola. The structure of Leigh's story is wonderful since it's set in 3 days. The first day being an introduction to the family and their eccentric behavior along with their friends. Especially in the parallel to how Andy and Aubrey are both achieving the dreams. The second act is where those parallels began to differ with Aubrey's troubling first day and Andy in shock that his dream might actually come true after working in a job that he doesn't like. The third act and final day is where everything breaks down emotionally and spiritually where the family comes together and look forward to the next part of their life, no matter how downbeat it is.

It's just not family issues and the working-class area that Leigh talks about but also the dynamics of the individuals. The real driving force of the story is Wendy who is a fierce supporter of everyone despite their choices. She supports Natalie for her work and desire since she is more content with who she is while also supporting her husband for seizing his opportunity. Then there's Nicola whose world is a mess since she is a person who had a chance only to find herself to be immensely disillusioned, with very few people around her, and having a hatred for everything including herself and her surroundings. The scene where Wendy and Nicola begin to talk, it's Wendy who understands her more than Nicola does. It's the film's most emotional scene of the movie that leads to an aftermath where all the characters have to grow. The credit for all of these things goes to Mike Leigh though the only flaw in his direction is in that improvisation whether the audience isn't sure if some things are improvised or planned.

Helping Leigh in capturing a realistic vision is cinematographer Dick Pope in his first of many collaborations with Leigh. While the film is shot in grainy film stock, the film has an authentic look in what a London suburb looks like, especially in its lighting where everything feels and looks real. It's no wonder Leigh has chosen Pope to become his regular collaborator after all these years. Helping out in the look of the film for its look is production designer Alison Chitty where everything looks like a working class place and the attempted sophistication of Aubrey's restaurant. Lindy Hemming shines with her work on the costumes which goes from the authenticity of what the family is wearing to the zany clothing that Aubrey wears which includes a San Francisco Giants jacket, a hat, and all sorts of things. The film is nicely edited by Jon Gregory while Rachel Portman delivers a memorable film score that plays to the upbeat attitude of Wendy.

While the film has a small cast of eight main actors, it's still a wonderful ensemble featuring Moya Brady as Andy’s quiet, desperate chef and a young David Thewlis as Nicola's frustrated, eccentric lover. Stephen Rea gives a funny performance as Patsy, a con artist who opens the door for Andy’s dream while his generosity might come off as manipulative despite his intentions. Timothy Spall is also funny as Aubrey with his nerdy clothing and eccentric behavior but when his dream falls apart, Spall brings a lot of depth and sadness to his role despite being bad to the people around him. Claire Skinner is excellent as the content, driven Natalie who refuses to confirm her sexuality while dealing with her own family while knowing full-well of her sister's self-destructive behavior.

Of the supporting cast, no one gives a brilliant performance as Jane Horrocks as the anti-social, bulimic, anti-conventional Nicola. Horrocks throughout the film sneers and never smiles while talking about being an individual when really, she's just trying to destroy herself through all sorts of things. Whether it's through eating large amounts of food only to throw it up or to have strange sexual moments with her lover. Horrocks steals the show in every moment of the film, even when her mother cracks through her emotional shield. Future-Oscar winner Jim Broadbent brings a humorous, delightful performance as Andy who hopes for a better life and becomes fulfilled when his dream starts to come true. Broadbent brings a lot of warmth and humor to his role while in the final act, he brings a sense of hope and humor despite an incident that would affect the course of the film.

The best leading performance goes to Mike Leigh's then-wife Alison Steadman as Wendy. Steadman brings a lot of cheerfulness and optimism to her role no matter how grim in whatever situation she’s in. There's also a realness into her performance while playing well to Leigh's improvisational direction. Steadman carries the movie with such ease while having a lot of great, comedic, heartwarming scenes, and wonderful dramatic moments, especially in her emotional confrontation with Horrocks.

While not a perfect film, Life is Sweet is still a quintessential, realistic and funny film from Mike Leigh. While the film is currently unavailable on DVD and hard-to-find on video, it's a must-see for any fan of Mike Leigh's films. With a superb cast lead by Alison Steadman, Jim Broadbent, and Jane Horrocks along with a group of Leigh regulars like Claire Skinner, Timothy Spall, Stephen Rea, and David Thewlis. The film has something everyone can relate to, even in the characters or situations while it's also a wonderful portrayal of a dysfunctional but loving family. For a look into Mike Leigh's early success, Life is Sweet is the film to see.