Originally Written and Posted at Epinions.com on 10/7/09. 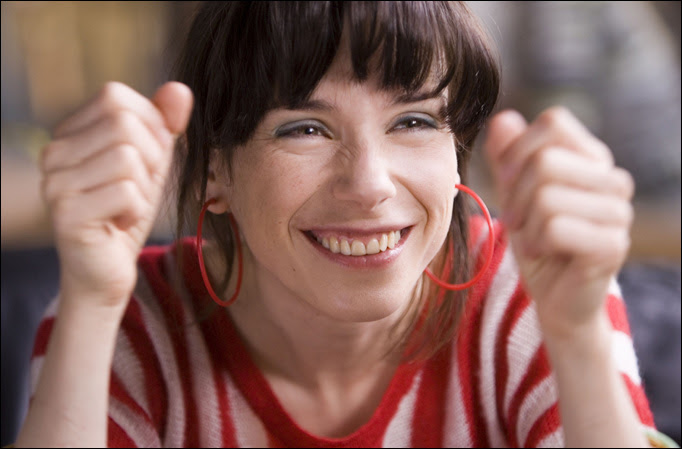 Following the success of 2004's Vera Drake, Mike Leigh achieved more acclaim as he earned a Golden Lion for the film as well as a Best Director nod from the Academy Awards. Leigh took a break from films to work on a play called Two Thousand Years in 2005 only to return in 2008 with a new film. The project was a departure of sorts from Leigh's own heavy-dramatic features for something more light-hearted and humorous. The new film told the story of an optimistic schoolteacher who brings happiness to the people she encounters in Happy-Go-Lucky.

Written and directed by Mike Leigh, Happy-Go-Lucky tells the story of a primary schoolteacher who is single and lives with a flatmate/fellow teacher. When her bike is stolen, she takes driving lessons as she annoys an angry driving instructor while taking flamenco lessons with a troubled dance instructor. In turn, she decides to make people's lives better while being cheerfully optimistic for her own life. A film that is a change of pace of sorts from Leigh's own dramatic-driven work. The film also revels in Leigh's sense of humor. Starring Leigh regulars Sally Hawkins, Eddie Marsan, and Alexis Zegerman plus Sylvestra Le Touzel, Caroline Martin, and Samuel Roukin. Happy-Go-Lucky is a witty, delightful, and charming film from Mike Leigh and company.

Pauline "Poppy" Cross (Sally Hawkins) is a primary school teacher in London who likes to teach kids by day while doing all sorts of fun things afterwards. In the weekends, she goes clubbing with her flatmate Zoe (Alexis Zegerman) and other friends including Poppy's younger sister Suzy (Kate O'Flynn). After losing her bike one day during a trip to the book store, Poppy decides to get a driver's license for the very first time. Being her instructor is Scott (Eddie Marsan) who is annoyed by Poppy's upbeat personality as he is a very cynical  man who doesn't like to conform.

After hurting her back from a trampoline class, Poppy decides to take a chance in getting flamenco lessons with her co-worker Heather (Sylvestra Le Touzel) from school. The first lesson has Poppy amused but the teacher is dealing with other problems due to a boyfriend who left her for a younger woman. Poppy continues her driving lessons much to Scott's annoyance about everything as she also takes notices of one of her young students named Nick who is starting to become a bully. After talking to Heather about Nick, a social worker named Tim (Samuel Roukin) comes in to help where he later asks Poppy out for a date.

Poppy and Suzy decide to go see their pregnant sister Helen (Caroline Martin) with Zoe as Helen wonders about Poppy's cheerful personality and her take on reality. The event has Helen upset as she, Suzy, and Zoe return home where Poppy caught a glimpse of Scott around her neighborhood. After a date with Tim that went well, Poppy has another lesson with Scott that turns sour due to Scott's troubled behavior where Poppy has a realization about him and herself.

The film is about a woman who is upbeat and full of life just trying to make everyone else happy when they're feeling down. While someone like that might seem annoying, the film's auteur Mike Leigh doesn't make the character of Poppy into some caricature or presence that will annoy people. Instead, Poppy is a person that is just trying to make things a little bit better for people around her while having fun at the same time. Though there's moments where people question about her happiness including herself. Through it all, she remains upbeat and optimistic as Leigh's approach to storytelling is fascinating. Though Leigh is famous for not writing a script and just making things up as he goes along with his actors. There's a liveliness to the storytelling as he lets things move quite leisurely as it revolves around Poppy in the weeks in her life as she had just turned 30.

Leigh's direction is straightforward but also stylish in the way he opens the film during the opening credits with split shots and such. There's an exuberance to how he directs a scene when it's lively but also maintains an observant feel in the scenes involving Poppy and Scott. While there's a possibility that Scott might be pining for Poppy, Leigh lets the audience interpret their own opinions instead revealing things. At the same time, Leigh lets the actors play off of each other while making sure the story is there as every scene is important. Including a strange scene where Poppy encounters a homeless man whom she tries to cheer up which would serve as a plot point to her own attempts to cheer people up. Leigh's direction overall is fascinating and whimsical as he creates a solid, upbeat film that doesn't get boring.

Leigh's longtime cinematographer Dick Pope brings a colorful look to the film to match up with the cheerful personality of Poppy. Shot on location in London and parts of the English suburb, it's all shot in mostly sunny exteriors in London in parks, bridges, and the streets of London. The interiors are also colorful, notably Poppy's flat and her classroom which is lively as Pope's work is excellent for the most part. Editor Jim Clark does solid work with the editing from the opening split-shot screens in the opening credits to side-wipe edits in a scene of how Zoe and Poppy teach their class room. Clark's work in the editing moves the film quite leisurely while playing to the upbeat personality of the film's protagonist.

Production designer Mark Tildesley plus set decorator Michelle Day and art directors Patrick Rolfe and Denis Schnegg do nice work with the look of the flat that Poppy and Zoe made while doing some wonderful work in the bag masks that Poppy's students wear as her classroom is filled with vibrant colors and a cheerful personality. Costume designer Jacqueline Durran does an amazing job with the costumes, notably the clothes Poppy wears which are colorful from her hippie-like dresses, vibrant shirts, and big high-heeled boots that she wears that annoys Scott. Leigh's longtime sound recordist Tim Fraser with sound editor Nigel Stone do fine work with the sound from the atmosphere of a club scene to the sound of cars moving during the driving lesson scenes. Music composer Gary Yershon does excellent work with the film's score often driven by flutes and strings to play with the film's cheerful personality. Even as it maintains a subtle, melodic presentation in its arrangements.

The casting by Nina Gold is superb from its array of actors playing small roles from Andrea Riseborough, Sinead Matthews, and Sarah Niles as friends of Poppy, Karina Fernandez as the flamenco teacher, Stanley Townshend as the tramp Poppy encounters, and Jack MacGeachin as the boy Poppy tried to help over his bullying. Other notable small but memorable roles come from Oliver Maltman as Helen's husband, Caroline Martin as Poppy's sister Helen, and Sylvestra Le Touzel as Poppy's fellow teacher Heather who invites her to flamenco lessons. Kate O'Flynn is very good as Poppy's younger, annoyed sister while Samuel Roukin is really good as Tim, the social worker Poppy befriends. Alexis Zegerman is excellent as Zoe, Poppy's flatmate who accepts Poppy's personality though often tries to ground her a bit on reality while showing frustrations about kids wanting to play video games instead of going outside.

Eddie Marsan is great as Scott, Poppy's driving instructor who is filled with frustration over Poppy's personality as well as things in the world. Marsan's performance is a marvel to watch as a man just trying to deal with everything only to blow up where Marsan finally gets to show his vulnerability despite his cynical personality. Finally, there's Sally Hawkins in a break-out performance that would win her the Golden Globe for Best Actress in a Comedy. Hawkins' cheerful, witty performance is full of life and humor while smiling throughout the film as she is someone who can make the audience smile while being a real person who knows what to do when someone is in trouble. Even if it's a small gesture of gratitude. Hawkins' performance is the heart of the film as she has great rapport with the cast, notably Marsan where she has her best scenes with him.

While it may not reach the dramatic heights of films like Naked, Secret & Lies, and Vera Drake, Happy-Go-Lucky is still a marvelous, charming film from Mike Leigh and company thanks to Sally Hawkins' delightful performance. Fans of Leigh will be taken aback at first in the change of tone from his previous films but will relieved that his approach to storytelling hasn't changed very much. For audiences needing something upbeat but with a bit of realism will find this film enjoyable but also something to smile at. Happy-Go-Lucky is an overall cheerful, witty comedy from Mike Leigh that delivers in what it sets out to do for the audience and that is to be happy.

Sally Hawkins is perfect, and the scenes with her and the driving instructor are both perfectly comedic and true. Showing why people shouldn't take themselves so seriously.

Exactly. I was surprised that no matter how bad the situation is and no matter how cynical someone can be. She remains upbeat. I do love those scenes with Hawkins & Marsan and I hope Mike Leigh works with them again.