Originally Written and Posted at Epinions.com on 2/23/04 w/ Additional Edits. 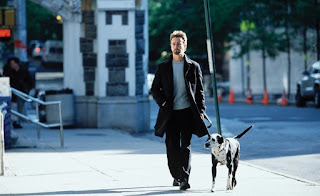 Directed by Spike Lee and written by David Benioff based on his book, 25th Hour tells the story of a man spending the last 25 hours of his life before going to prison.  Set in the post-9/11 world of New York City, the film follows the man with his friends, his girlfriend, and father while wondering where did it all go wrong as he is about to go to prison.  The film also marks a departure of sorts as Lee is directing a cast mostly filled with white actors as opposed to his usual African-American actors that he's worked with for a large portion of his career.  With a cast led by Edward Norton along with Rosario Dawson, Barry Pepper, Philip Seymour Hoffman, Anna Paquin, Tony Siragusa, and Brian Cox. 25th Hour is one of Spike Lee's enriching films to date.

The film begins when a young drug dealer named Montgomery "Monty" Brogan (Edward Norton) and his Ukranian accomplice Kostya (Tony Siragusa) find a battered dog in a highway in New York City as the kidnap him and Monty makes him his dog that he named Doyle. Years later, Monty is now facing a seven-year prison sentence after being busted by feds. On his final day of freedom, Monty decides to go some people for one final day. He decides to meet the first of his two childhood buddies, Jacob Elinsky (Philip Seymour Hoffman) who is now an English teacher in a NYC school. Monty visits him during a class session one day just to tell him about tonight's final romp as he later calls his other buddy, Frank Slaughtery (Barry Pepper) who is a commodities broker. Frank gets a call about the night as he does his usual swagger of making deals and slacking off. Jacob meanwhile, is having problems as one of his students named Mary D'Annunzio (Anna Paquin) wants to talk to him about a grade she got over one of her papers.

With the day looming, Monty goes home to his apartment where he meets with his Puerto Rican girlfriend Naturelle (Rosario Dawson) as he suspects her of being the one who ratted him out to the feds. Naturelle notices the quiet tone Monty has taken to her as he reflects on the day he got busted and how the feds told him it was her that ratted him out. With the day going by after having a meeting with Kostya about a final meeting with his uncle Nikolai (Levani Outchaneichvili), Monty reflects on what has happened to him. He goes back to thinking of his days dealing, the day he first met Naturelle when she was just 18 and still in school. He later has a final dinner with his father James (Brian Cox) as they talk about the last day. Monty goes to the bathroom where he sees himself insulting everything including himself. Monty goes back as he and his father talk about what went wrong with them as James felt, this was going to be the last time he would ever see his son.

Jacob meanwhile goes to Franks's apartment, which is nearby the area of what once was the World Trade Center. The two look at ground zero as they reflect on what has happened to Monty. Jacob insists he'll see him after he's out of jail but Frank meanwhile wants to but felt that Monty put himself into all of this and couldn't bring himself to give any sympathy. Later in the night, the two discuss about sex and how Frank is pretty good at flirting with women while the insecure Jacob admits to having troubles. They later see Monty and Naturelle as she joins Jacob and Frank for a drink knowing that they'll never see Monty again. They all decide to go to the club where Monty is supposed to meet Nikolai.

They go to the club where trying to get in was Mary as she sees Jacob and he's in shock that she's out on a school night. Monty decides that she can go in as she joins the gang for the party. Naturelle and Mary dance the night away to Grandmaster Flash & the Furious Five's classic White Lines as Monty decides to give Doyle to Jacob since Doyle always liked him. Monty also has a meeting with Frank as Monty wonders what will happen to him after he's in jail. He feels all those years of dealing cost him not just his freedom but a chance at a future as Frank is trying to figure out how to help him. Mary meanwhile tries to seduce Jacob as they engage in a kiss while Frank and Naturelle have a talk where Frank finally lets out all of his frustrations on her since he felt she was the one who ratted him out.

With the night looming, Monty sees Nikolai and Kostya as Monty is now officially out of Nikolai's business as he learns the truth about the bust. For Monty, it was a strange night as he feels more down in the dumps as he ponders all that is left for any sense of hope.

While 25th Hour isn't up to par with classics like Do the Right Thing or Malcolm X, it is still one of Spike Lee's finer efforts. Being a master of drama Lee brings in a structure of emotional, cerebral moments for the film's central protagonist. Using David Benioff's script as a guideline, Lee definitely uses the elements of humanist drama to portray the complexity of the characters while displaying its flaws, notably the backdrop of post 9/11 NYC that still shows its prejudices and despair while showing the vibrant American spirit that is prevalent throughout. For Spike Lee, it's another endearing tribute to New York City while showing the spirit of the city's residents and the characters in the film.

Capturing a colorful, grainy look to New York City wonderfully is cinematographer Rodrigo Prieto, who definitely gives a dark, classical look to the film, especially showing only blue colors in the dance club scenes and the dark, wooden tone for the bar and outer club scenes. Prieto's work is truly one of the film's technical highlights thanks to eerie cinematography.  Another amazing element to the film is the score by longtime Lee contributor Terence Blanchard, who brings in a haunting, grandiose score with a sprawling orchestra arrangement and an ominous Arabian chant in the background while using the music of Grandmaster Flash and Bruce Springsteen for the film's emotional and fun moments.

With many of Lee's past films, there's always a great cast and here, it's no exception. Edward Norton is excellent as the troubled Monty by showing a sense of intelligence and sympathy of a man gone wrong and seeking any sort of redemption. Since breaking through with his Oscar-nominated performance in Primal Fear, Norton has been one of those actors who can instill a sense of compassion, fear, and intelligence and as Monty Brogan, he brings in a stellar performance. Topping Norton in performance is Barry Pepper as Frank by bringing in a swagger and cynicism that is relevant but also showing signs of sympathy and pain, especially in the film's final moments. Philip Seymour Hoffman is always great as the often-insecure characters and in 25th Hour, he still pulls off another amazing performance by displaying elements of self-loathing as well as compassion as he insists, he will see Monty again.

Rosario Dawson delivers her best performance to date as Naturelle by not just bringing an element of classical sexiness but a display of street smarts and intelligence to her character. She does more than just play Norton's girlfriend by adding her own sense of individuality, especially in a scene with Pepper as the two start a conflict with each other. While Anna Paquin does a good job as a Lolita-like role to Hoffman's character, she still at times has trouble delivering a NYC accent, notably in the club scenes. While this role is miles away from her Oscar-winning breakthrough in The Piano where she looked great in a sweating glow, she still needs to perfect her American accent while try to find more ways to break away from ingenue type roles as it was recently perfected by fellow young-acting peer Scarlett Johansson.

While the roles of DEA agents by Tony Devon and Isiah Whitlock Jr. are hilarious in the bust and interrogation scenes, the film's funnier moments come from Tony Siragusa. While he tries not to play the stereotypical Soviet fat man, Siragusa definitely brings some funny moments that annoy Norton's character while displaying elements of smarts as far as business is concerned. Levani Outchaneichvili as Nikolai is menacing but also noteworthy as he tells Norton's character to watch his back when he's prison as he strays away from a typical mob role. Finally, there's the always-amazing Brian Cox as Edward Norton's father. In a year where he played a screenwriting guru in Adaptation and a tough highway patrol captain in Super Troopers, Cox delivers a stellar performance as Norton's guilt-ridden father as he brings in a performance that I think the Academy has overlooked, especially in the film's final moments where he brings in moments of clarity and moral convictions that was needed. For the versatile Cox, this is one of his best performances to date.

While 25th Hour has a few predictable moments and some flaws, it's still a stellar, enduring film from Spike Lee. Fans of the filmmaker will love Lee's masterful approach to dramatic structure and emotionally intense scenes. Newer fans will find the performances of the actors more appealing while giving a nice introduction to Lee's masterful direction. With amazing performances from Norton, Pepper, and Cox that leads the cast, 25th Hour works not just as a great tribute to NYC but also showing the struggle of a human being regardless of color, which is what Lee wanted to show. In the end, 25th Hour is one of the best films of 2002 coming from one of the most seminal African-American filmmakers in the past 20 years.

I think this is a fairly underrated movie that is quite overlooked by many, including film buffs. Love the cast, they really kept me engaged throughout even though it's a relatively cerebral movie.

I agree. I'm not a fan of David Benioff's work as a screenwriter but I do like this film a lot. It's not perfect but certainly enjoyable and I just love how Lee shoots the scenes at the club. It's my favorite moment of the film and Anna Paquin was fuckin' hot.