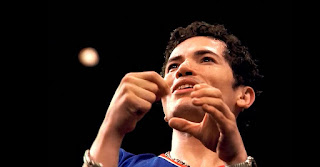 One of the premier Latin-American comedians in the world of comedy, John Leguizamo has been known for his crazy antics in his comedy acts. Notably playing various characters based on either his own life as a form of satire. While he’s also managed to have a successful career in films appearing in such films as Carlito’s Way as well as two collaborations with Australian director Baz Luhrmann for William Shakespeare’s Romeo + Juliet and Moulin Rouge!. Leguizamo remains a comedy actor on-screen and on the stage while he also dabbles in drama. In the early 1990s, Leguizamo created two successful one-man stage performances entitled Mambo Mouth and Spic-O-Rama that allowed him to make fun of Latin stereotypes as well as members of his own family. In 1998, Leguizamo created his third one-man stage performance about his upbringing and tumultuous family life entitled Freak.

Freak is a semi-biographical one-man stage performance that has John Leguizamo talking about his own upbringing as he grew up in Jackson Height, Queens in New York City to a Puerto Rican father and a Columbian mother along with a younger brother. Leguizamo also reflects on the days he was growing up amidst the chaos of his own dysfunctional family along the moment he wanted to become an actor. Written by Leguizamo and David Bar Katz, the stage play is directed by Spike Lee whom he would work with Leguizamo for his 1999 film Summer of Sam. The result is a wonderful collaboration between John Leguizamo and Spike Lee.

For the first half of the show, Leguizamo discusses his childhood where he grew up in Jackson Heights, Queens after his family emigrated from Colombia. He also reflects on a theory claiming that every kid has a good and bad grandmother. The latter of which is a very religious woman who believes that John was the spawn of Satan. While his father was a man who had the dream of running a tenement building, he was also obsessed by the TV he had at the home where he cleaned everything but the screen. That leads to a skit about the broken antenna during a time John and his little brother that he called Poochie watched the TV and messed around with the antenna.

Leguizamo also discusses about the first time he got drunk with his dad but also his first discovery of sex along with his buddies. It was also around the time that his father finally achieved success running a tenement building while having different types of girlfriends. Yet, all of John’s ideas of his father would be shattered by a lie which ends the first half. The second half has John talking about his life as a teenager where he would fall for this gorgeous African-American girl while trying to impress her Muslim father. Instead, it becomes a disaster as Leguizamo and his family were forced to move to other neighborhoods that featured different ethnicities like the Irish and the Italians. Even as it led to John discussing the time he lost his virginity and how he suddenly got himself into an acting audition with Lee Strasberg.

Shot on location at the Cort Theater on Broadway, Spike Lee creates a document of John Leguizamo performing this one-man performance as he shoots it on various spots. Even as Lee shows the performance from various perspectives whether its from the audience sitting in front of the stage or from the side of the stage. Lee is always making sure that it’s about Leguizamo and how he is telling the story. Even where at one point, Leguizamo is attempting to do something and nearly collide with a cameraman where Leguizamo would do it over as a performance.

Leguizamo’s performance is truly magnificent to watch in how he tells a story without delving into gimmicks or saying lots of profanity. It’s all about who he is as he reveals a bit of his soul to the audience. In the performance, he is very engaging to the audience where he talks to them a bit. Still, he is commanding in making people laugh at something they shouldn’t be laughing at. Yet, he also brings some dramatic elements to his performance which chronicles not just the disappointment he had as a kid but also the turmoil in his parents’ marriage. Leguizamo is able to balance all of that while keeping the audience intrigued and having a laugh. Overall, John Leguizamo’s stage performance along with Spike Lee’s wondrous direction makes Freak a captivating yet entertaining viewing.

Helping Lee and Leguizamo in the presentation is cinematographer Malik Hassan Sayeed whose camera is always capturing the moment in Leguizamo‘s performance. Even as longtime Lee collaborator in editor Barry Alexander Brown helps maintain the rhythm of Leguizamo‘s performance and in Lee‘s direction. Production designer Wendell K. Harrington does a great job in the art direction by creating a screen for Leguizamo’s stage in the back along with props for the performance.