Originally Written and Posted at Epinions.com on 8/28/03 w/ Additional Edits/Revisions. 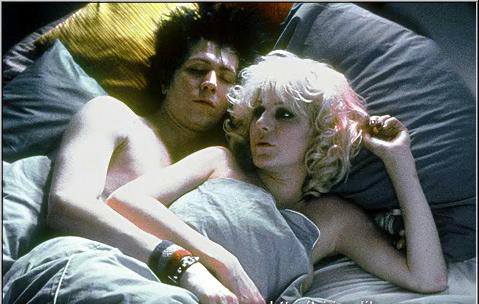 Whenever the movies enter the realm of rock n’ roll, it’s a hit-or-miss situation depending on what subject matter they’re doing. Some like 24 Hour Party People, Almost Famous, or Krush Groove can hit the mark while movies like The Doors or some lame TV music films VH1 make just miss the mark. The problem with some films based on music scenes or individuals is that they don’t please the musical elitists and historians who always check for something accurate and true. While some of the scenes in 24 Hour Party People did become exaggerated, they were at least entertaining but in Oliver Stone’s movie on the Doors, it completely became over the top and the story ended up becoming very inconsistent. In 1986, British filmmaker made a film about a rock icon, Sid Vicious of the Sex Pistols in a movie about his love life with Nancy Spungen simply titled Sid & Nancy.

Directed by Cox and co-written with Abbe Wool, Sid & Nancy is about the couple’s self-destructive love life from 1977 to their downfall in early 1978 where Nancy was found dead at the Chelsea Hotel in New York City and February of 1979, Sid died of a heroin overdose. Playing the doomed lovers in their respective roles is Gary Oldman and Chloe Webb. The film shows how Sid meets the American groupie Nancy in Britain just as he just joined the Sex Pistols on bass while the band would self-destruct completely in America in early 1978 and Nancy would try to manage Sid’s career but both would succumb to their own addiction to heroin and their eventual downfall. While some of the historical portions of the film are inaccurate, Alex Cox doesn’t try to make Sid & Nancy a historical film with moment being played dramatically. Instead, Cox just focuses on the two and their love-hate relationship towards each other. While it’s not a perfect film, Sid & Nancy is an excellent, intense love story that is unconventional in its tone.

The film begins with the scene at the Chelsea Hotel in NYC where Sid Vicious is in shock over the dead body of Nancy. Her friend Gretchen (a then-unknown Courtney Love) is distraught while Sid is taken to a precinct where he is being interrogated by a detective (Biff Yeager) about Nancy. Sid looks back at how he met Nancy when he and Sex Pistols singer Johnny Rotten (Andrew Schofield) is destroying a Rolls Royce and waiting to meet up a friend and dominatrix named Linda (Anne Lambton). Linda introduces the two an American groupie named Nancy Spungen and Johnny of course, doesn’t like her but Sid does. Nancy decides to go to see the Sex Pistols that included guitarist Steve Cook (Tony London) and drummer Paul Cook (Perry Benson) where Sid beats up a journalist and plays with the band although he couldn’t play bass at all.

Later in the night, Nancy tries to have sex with Sid but Johnny doesn’t like Nancy since she likes to have sex like all Americans and the British thinks sex is just disgusting to watch. Then one day at a pub, Sid sees Nancy trying to score drugs from a rocker that fails and he feels sorry for her, as he wants to try heroin. Nancy takes his money and tells him she’ll be back in an hour to get some smack but doesn’t show up. Sid sees her a few days later after she tried to score more dope from another rich rocker but is angry that the rock star throws all her stuff. Sid helps her and tries smack for the very first time. Suddenly, a self-destructive relationship with the two ensues as they have love for each other and heroin.

Their relationship begins to bloom much to the disgust of the Pistols and their manager Malcolm McLaren (David Hayman) while they were performing on a boat, a mile behind the Queen of England’s boat on the day of her Jubilee. The boat trip was disastrous for all involved while Sid & Nancy evade from the cops and were in demand for more smack. Nancy called her mom for more money but refused as she smashed the phone booth in disgust. The two’s relationship deteriorates once Sid has to go to America for an upcoming tour as they break up.  The Sex Pistols' ill-fated American tour is marred by tension and Sid's dependency for heroin as he misses Nancy leading to the band's final show at the Winterland ballroom in San Francisco.

After the break-up of the Pistols, Sid flies to France to work on a solo record with the guidance of the corrupt McLaren as he passes out on a drug binge on the flight. Sid gets a surprise visit from Nancy as they fall in love through the eyes of Paris. Sid films a video for his hilarious cover of Paul Anka’s "My Way” with director Julien Temple where Sid shoots up many people including Nancy in a mock death scene where Nancy and Sid are in bliss over their love-hate trip of self destruction  The couple move to New York City at the famed Chelsea Hotel as Nancy tries to take over Sid's music career.  While they try to beat their heroin addiction through a drug counselor (Sy Richardson) with the help of methadone.  Things start out fine for Sid's music career until Nancy screw things up.  A meeting with Nancy's family becomes a disaster as the relationship between the two would lead to tragedy.

The film is a love story about two people who are really destined for each other now matter how fucked up they are.  Screenwriters Abbe Wool and Alex does a fascinating job in studying these two individuals as Sid is an inept musician with a penchant for being self-destructive and rowdy.  Nancy is a woman who brings both the best and worst about him as she is someone wanting to be with anyone who is famous.  Yet, Sid and Nancy are the kind of people who seem to thrive on self destruction and fucking this up no matter what happens.  When Sid isn't with Nancy, he can be really awful and on the verge of falling apart.

Alex Cox's direction is definitely entrancing in the way he presents the film.  Even though it's a very dirty, street-like type of film.  It also has some Cox's finest work to date as a director.  Some of it is attributed to the gorgeous cinematography of Roger Deakins.  Particularly in scenes revolving around drugs where there's a shot of Sid and Nancy kissing with garbage falling around them.  There's also a scene where the two are high on heroin and their hotel room is on fire.  It's where Cox finds the beauty in something can be very ugly and just downright disgusting.

Cox succeeds in a lot of things about the film including the punk scene.  Yet, there are some inaccuracies in the film such as the final Sex Pistols show at the Winterland Ballroom in San Francisco.  Still, Cox isn't striving for accuracy but rather a dramatic interpretation of the events that happened during the days of punk.  Then there's the film's climatic moment about what happened to Nancy where it's really an interpretation though to this day, no one knows what really happen.  Despite the flaws the film has, it is still a mesmerizing yet ugly love story.

The film does include several cameos, including Cox regulars Sy Richardson and Dick Rude, punk icons like Edward Tudpole, the Circle Jerks, and the Godfather of Punk himself, Iggy Pop with his then-wife Suchi in a scene in the Chelsea hotel. Even the film’s music from the Circle Jerks, Pray for Rain, the Pogues, and the theme song by late Clash singer Joe Strummer is well used, especially in the recreation of the Sex Pistols’ material by original bassist Glen Matlock and other musicians. The varied supporting performances work well but the best goes David Hayman as the corrupt Malcolm McLaren.  Andrew Schofield is interesting as Johnny Rotten as he stands out though his interpretation of the famous Sex Pistols/Public Image Ltd. frontman is inaccurate despite Schofield's snotty performance.

Chloe Webb is superb as Nancy Spungen.  Webb brings the right quality to a character who is quite unlikeable though she has her charms.  Even for someone who is truly a disgusting character who wants to do things right for Sid but is always a constant fuck-up.  It's a truly remarkable performance for a very underrated actress.  Finally, there's Gary Oldman in one of his many iconic film roles as Sid Vicious.  Oldman brings a wonderful humor and fragility to a character who is at times, dumb but is determined to become somebody.  Oldman creates a character that is truly amazing for a man who could or could have not killed the woman he loves.  Yet, he brings sympathy to a guy really tries to be famous and do right for Nancy.  It's definitely Oldman in what would be his breakthrough performance.

While it's not a perfect film, Sid & Nancy is an excellent film from Alex Cox featuring fantastic performances from Gary Oldman and Chloe Webb.  Audiences wanting a love story that isn't conventional and doesn't play to standards will enjoy this.  While audiences wanting to see the films of Alex Cox will see this as an excellent introduction though Repo Man is a better film.  Audiences interested in the world of punk will see this as a great fictional interpretation though the best stories about British punk are the Clash's Westway to the World by Don Letts and two documentaries by Julien Temple.  2007's Joe Strummer:  The Future is Unwritten about the late Clash frontman and 2000's The Filth & the Fury about the Sex Pistols.  In the end, Sid & Nancy is a remarkable yet chaotic film from Alex Cox.

Why then should anyone of sane disposition wish to see the film? Because it is still a love story, and a very touching one at that. Oldman and Webb's performance are what makes this film so fascinating as well. Good Review!

Thank you Dan. I had to re-write lots of stuff from my old review (that I've deleted at Epinions because it's a sinking ship).

Plus, it's been a while since I've seen it and it is a great love story. Just as long as no one takes the historical aspects and portrayals of other characters seriously.