Originally Written and Posted at Epinions.com on 10/28/06 w/ Additional Edits. 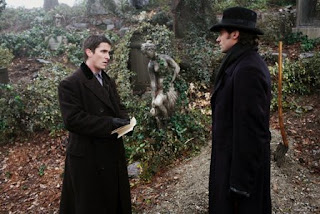 Following the success of 2005's Batman Begins, Christopher Nolan has proved himself that he can do a big-budget blockbuster while reinventing the Batman film franchise after the campiness it suffered in the mid-90s. While Nolan is considered to be one of the finest directors after his 2000 film Memento and the 2002 remake of Insomnia made him an established director. While he still continues to work on the Batman film series, Nolan decides to go back to smaller territory by going into a film about dueling magicians based on a novel by Christopher Priest entitled The Prestige.

Adapted into a script by Christopher and Jonathan Nolan, The Prestige is about two 19th Century magicians whose friendly rivalry turns deadly when a magician performs the ultimate magic trick that led his friend to try to discover his secrets. Directed by Christopher Nolan, the film is a study of friendship and rivalry while weaving into the world of magic in its good and bad side. Starring recent Nolan regulars Christian Bale and Michael Caine plus Hugh Jackman, Scarlett Johansson, Andy Serkis, Ricky Jay, Rebecca Hall, Piper Perabo, Roger Rees, and music legend David Bowie. The Prestige is an entertaining, thrilling film from Christopher Nolan.

On a trip to the Colorado Springs, an American magician named Robert Angier (Hugh Jackman) takes a trip to try and find a discovery that he hopes would become the greatest magic trick. He hopes to find a man who has done wonders for electricity in the name of Nikola Tesla (David Bowie) only to meet his assistant Alley (Andy Serkis) first. Angier's motives to finding Tesla is far more complex as his story begins. Years ago in London, Angier and a fellow magician named Alfred Borden (Christian Bale) were part of a magic troupe performing tricks with Angier's wife Julia (Piper Perabo) and a veteran magician named Milton (Ricky Jay). The trick often consists of Julia escape a tank full of water by untying herself through a knot. Often assisting and watching things go right is a inventive expert named Cutter (Michael Caine). The trick is a success though Borden wants to push the boundaries of magic as he and Angier watch an old Chinese man (Chao Li Chi) perform a trick where Borden knows the secret behind everything.

When Angier, Julia, Borden, and Milton chose to do the same trick the next night, Borden decides to make things more complicated with tragic results. Angier's friendship with Borden has officially become troubled as Borden goes at alone where he charms a young woman named Sarah (Rebecca Hall). Hoping to make it as a magician, Borden struggles to make his tricks seem beyond the ordinary expectations but one night, in an attempt to do the catching bullet trick, it goes wrong thanks to Angier. Hoping to rebound from his wife's death, Angier with the help of Cutter decides to start his own career as a magician with the name "The Great Danton" given by his wife. Joining along is a new assistant named Olivia Wenscombe (Scarlett Johansson) who helps along being his assistant in the help of performing tricks. During a night to before another of his tricks, Borden comes along, in disguise, and takes revenge. Learning that Borden now has a family with Sarah that includes a little girl named Jessica (Samantha Mahurin), Angier hopes to outperform Borden, who has now made a small sensation with his own trick known as the transporting door.

Trying to figure things out with Olivia thinking that there's a double, Angier decides to do the same trick with the help of a double and more showmanship that Borden seems to lack. Olivia finds one in a drunk who looks exactly like Angier with a beard. Angier's new version of the transporting door trick becomes a total success yet he remains obsessed in how Borden did his trick by having Olivia become a spy to find out how Borden did it. When Olivia is sent, things go wrong as she ends up falling for Borden which makes his relationship with Sarah become complicated. When Borden decides to make things worse for Angier that involved Angier's double, Angier decides to go to Colorado Springs in order, to outdo Borden. What he finds is how Tesla created a machine that would make everything seem magical. With Borden's own world starting to fall apart due to his ability in keeping secrets, Angier finally returns to perform his trick where the rivalry becomes deadly.

Taking the same, non-linear approach of Memento but in a more conventional way, the Nolan brothers take Priest's novel and turn it into a thrilling yet psychological puzzle that dazzles the audience while making them confused. Still, the film plays to the structure in a way that reveals the three-act structure of magic which starts with the pledge, then the turn, and finally, the prestige. The result is a film that reveals its secrets right in the end but leaving the audience to figure out what's going on. The result is a film that plays more in figuring out how two magicians try to outdo one another and how they're willing to do anything at all cost, even to get attention. The film's plot about dueling magicians is simple but when the story develops, it becomes far more complex.

With the script that he co-wrote with his brother Jonathan, Christopher Nolan definitely brings a sense of mystique to the film where it's all told in not one but in two perspectives of its protagonists. Nolan's observant yet mystical direction does play like magic in not wanting to reveal something though he does use tricks where the audience might know about something but does something very unexpected. Overall, Nolan brings a very strong approach to his directing that plays like a magician in the fact that he wants to create an entertaining puzzle that the audience can figure out.

Helping Nolan with his presentation of the late 19th Century is cinematographer Wally Pfister whose photography of intimate, interior settings are wonderful with sepia-like colors and dark tones while the exterior, notably a sequence with light bulbs are amazing to watch. Production designer Nathan Crowley with art director Kevin Kavanaugh do great work in the film's look of the late 19th Century including the areas and most of all, the work of Tesla with help from visual effects supervisor Stephane Ceretti. The costume design of Joan Bergin also excellent in not just the suits for the men as magicians but for the women in their roles. Editor Lee Smith did great work in playing to the film's non-linear structure and dazzling approach for the characters in the perspective cutting. Music composer David Julyan creates an ominous, yet epic-like score that plays to the emotions of the characters and everything to create some suspense for the film with an additional track from Radiohead's Thom Yorke in the film's final credits from his album The Eraser.

The film's cast is superb with small performances from Roger Rees as a man named Owens, who wants to know Borden's secrets plus William Morgan Sheppard as a promoter, Chao Li Chi as the Chinese magician, Samantha Mahurin as Jessica, and noted magician Ricky Jay who also serves as a consultant in magic tricks. In a small yet wonderful role, Piper Perabo is great in her brief appearance as Angier's wife Julia who inspires her husband into taking a name while being a great assistant. Andy Serkis is also great as Tesla's assistant Alley, who brings some humor and morals to a man who is aware of what Angier is seeking. While Scarlett Johansson is fine in her role as Olivia, who is a bit complex in her role as a double, her character in some ways feels unnecessary to the plot since nothing new is brought. Yet, it's confusing to see why she has a top billing when her role isn't that big or that important since she ends up playing a love interest to both Jackman and Bale.

The film's real breakthrough comes in the form of Rebecca Hall as the innocent Sarah who falls for Bale with as she is amazed by his ability to play and be magical while being his biggest supporter. Her character goes through the great development from a loving wife to a woman being kept in the dark as Hall is really amazing in her role. In his first major film role since 1996's Basquiat (1999's Mr. Rice's Secret and the cameo in 2001's Zoolander don't count), the legendary David Bowie makes a grand impression in his small yet memorable role as Nikola Tesla. With his knowledge of science and illusion, Bowie gives Tesla a broad personality whose morals about games and magic is a man who gives warnings while making a machine that reveals to be something more. Bowie's performance is amazing in every way where one hopes he can do more acting roles. Michael Caine is also great as the inventive mentor Cutter with his moral judgement and guidance as a man who enjoys magic but knows when things go to far while he plays a supporter for Angier. Caine is the film's real moral guide and sense of wisdom who knows what good magic can do but goes his way into not exactly revealing its trick.

Hugh Jackman delivers an amazing performance as Robert Angier with his obsessive, determined personality as Jackman delivers all the right notes. Known to people more as Wolverine in the X-Men movies, Jackman gets to be a bit more charming and complex as man who seems to have everything only to have his obsessions become more troubling. Jackman also gets to play in disguises including his role as a drunk double that reveals his humor. It's a great performance from Jackman who also has great chemistry and tension with his co-star Christian Bale. Bale delivers a knockout role as Alfred Borden. Using his charm and wit, Bale's character is truly a multi-dimensional man who can be sweet and charming while being totally driven and arrogant at the same time. Bale proves his worth in this character while also noting that he has become one of the finest actors of his generation.

While The Prestige is a bit flawed in its puzzle-like approach, it's still a fantastic film from Christopher Nolan highlighted by a superb cast led by Christian Bale, Hugh Jackman, Michael Caine, Rebecca Hall, and David Bowie. Fans of Nolan's work will indeed find the director returning to some old-school tricks while conventional audiences will be entertained by its mystical, magical approach. For a movie where Batman battles Wolverine in a game of one-upmanship, The Prestige is the film to see.

When it comes to challenging an audience, as well as being highly entertaining, Nolan is always best, and this is one of his best showings. Good Review!

Thank you Dan. Now all I need to see from Nolan is Following and then watch the original Insomnia before seeing Nolan's version again.