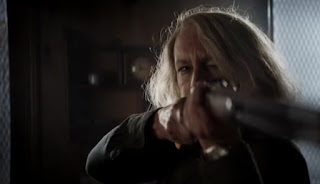 Based on the 1978 film by John Carpenter and screenplay by Carpenter and Debra Hill, Halloween is a sequel to the 1978 film that revolves around the survivor of a killing spree as she learns that the madman has escaped and is killing again with her estranged family being the target. Directed by David Gordon Green and screenplay by Green, Danny McBride, and Jeff Fradley, the film explores a woman’s trauma and her estrangement from her daughter and granddaughter while getting ready for the madman that is coming back as Jamie Lee Curtis reprises her role as Laurie Strode with Nick Castle also returning as the killer Michael Myers along with James Jude Courtney in the same role. Also starring Judy Greer, Andi Matichak, Will Patton, and Virginia Gardner. Halloween is a gripping and terrifying film from David Gordon Green.

40 years after events in which a madman killed a bunch of people with a young woman being its sole survivor, the film is about the madman in Michael Myers being transferred to a new facility where he escapes seeking to kill once again as well as go after the young woman he was unable to kill in Laurie Strode. What he doesn’t know is that Strode is more than ready to face him once again yet she is also coping with the fact that years of paranoia has made her estranged from her daughter and granddaughter. The film’s screenplay by David Gordon Green, Danny McBride, and Jeff Fradley definitely focuses on the events of what happened in the original John Carpenter film while dismissing everything else that came between through its sequels, reboots, and remakes including rumors that Strode and Myers were siblings. Instead, it focuses on the events of a few days where Strode is aware that Myers is about to be transferred as there are those interested in his actions as well as Myers’ psychiatrist in Dr. Ranbir Sartain (Haluk Bilginer) who was a student of Myers’ previous psychiatrist Dr. Sam Loomis.

Much of the action takes place in the span of three days with the first act being set two days before Halloween while its second and third act is set on Halloween as they play into Myers’ arrival back into the town where he had previously killed a bunch of people. Strode rarely steps out of her home as she would get wind about a bus accident knowing that Myers was on that bus as she warns her daughter Karen (Judy Greer) about what is to happen while Karen’s daughter Allyson (Andi Matichak) is out at a Halloween school party. Its third act is about the showdown at Strode’s home between Myers and Strode along with Karen and Karen’s husband Ray (Toby Huss) with Allyson trying to get to her home after her own encounter with Myers.

Green’s direction does have elements of style including a few visual homages to the 1978 film by John Carpenter. Yet, Green does infuse his own ideas in terms of the compositions he creates as well as the atmosphere he maintains throughout the film. Shot largely on location in and around Charleston, South Carolina, Green opens the film in the prison where he uses a lot of great wide shots to get a scope of the locations including the prison atrium where two British podcasters try to contact Myers. Throughout the entirety of the film, Myers’ real face is barely shown as Green wanted to maintain his mystique and intrigue as well as the idea that Myers might not be the one lurking to create this idea of misdirection. Even in the usage of close-ups and medium shots for moments of intimacy as it help play into the suspense while Green’s approach to the violence isn’t about gore but rather the impact and its act where he wouldn’t really show what is happening.

Green also creates these intense tracking shots that includes a scene of Myers walking to other people’s houses and just killing people at random including a scene in one person’s house as he kills someone yet there’s someone else there but he just ignores it. Green also emphasizes on the aftermath of a murder as it just adds to the terror while its second act that is about Myers just killing random people with Deputy Frank Hawkins (Will Patton) pursuing Myers having been the man who arrested Myers 40 years ago with Dr. Sartain also pursuing Myers but for his own reasons. The third act is about Strode and her family confronting Myers as Strode knew what was to come but also some revelations about why Strode and her daughter became estranged as the latter realizes what she must do as well. The showdown definitely recall visual traits from the 1978 film but also in maintaining that air of horror and suspense as well as the stakes of what Strode and her family has to face. Overall, Green crafts a riveting and haunting film about a woman protecting her family from the man who tried to kill her during a killing spree 40 years ago.

Cinematographer Michael Simmonds does excellent work with the film’s cinematography from the usage of low-key and available light for some of the exterior scenes at night as well as for some eerie scenes in some of the homes at night. Editor Tim Alverson does terrific work with the editing as it is largely straightforward with some rhythmic cuts to play into the suspense and terror. Production designer Richard A. Wright, with set decorator Missy Berent Ricker and art director Sean White, does fantastic work with the look of Karen’s home as well as the home that Strode lives in with all of its locks and security settings as well as the rooms of some of the characters in the film. Costume designer Emily Gunshor does nice work with the costumes including Halloween costumes that random people wear for Halloween including Allyson’s Halloween costume.

Makeup effects designers Christopher Allen Nelson and Vincent Van Dyke does brilliant work with the makeup in some of the gory effects that are presented in the aftermath as well as the ragged look of Strode. Visual effects supervisor Simon Maddison does superb work with the visual effects as it is mainly some set dressing that include a few scenes of violence in the film. Sound designers P.K. Hooker and Chris Terhune, along with co-sound editor Will Files, do amazing work with the sound in creating that tense atmosphere for the suspense and terror as well as the sounds of people outside trick-or-treating and the scenes in the film’s climax.

The film’s music by John Carpenter, Cody Carpenter, and Daniel Davies is incredible for its eerie and hypnotic electronic-based score that includes the original theme composed by John Carpenter while he, his son Cody, and Daniel Davies provide a lot of eerie textures into the music to build up the suspense and drama as it is a highlight of the film. Music supervisor Devoe Yates provide a decent music soundtrack that features an array of contemporary music from electronic dance music and country that is played in the background in the school party scene.

The casting by Sarah Domeier Lindo and Terri Taylor is wonderful as it feature some notable small roles from Jimbrail Nantambu as a young boy Allyson’s friend Vicky is babysitting for, Miles Robbins as Vicky’s boyfriend Dave, Drew Scheid as a friend of Allyson’s boyfriend in Oscar, Dylan Arnold as Allyson’s boyfriend Cameron, Omar Dorsey as the local head sheriff named Barker, Sophia Miller as a young Karen through flashbacks, Jefferson Hall and Rhian Rees in their respective roles as British true crimes podcasters Aaron Korey and Dana Haines who both try to get information about the murders 40 years ago from Myers and Strode, and Will Patton in a terrific performance as Deputy Frank Hawkins as the man who arrested Myers 40 years ago as he is eager to help Strode and stop him for good. Haluk Bilginer is superb as Dr. Ranbir Sartain as a student of Dr. Sam Loomis who has been Myers’ psychiatrist as he pursues him following Myers’ escape from a bus accident hoping to understand more of Myers’ state of mind.

Virginia Gardner is fantastic as Allyson’s friend Vicky who is aware of Allyson’s family history as she doesn’t do Halloween due to a babysitting gig yet she proves to be a kind person who knows something isn’t right. Toby Huss is excellent as Karen’s husband/Allyson’s father Ray Nelson as a man who is uneasy about his mother-in-law’s paranoia until things do become deadly as he helps her out in trying to deal with Myers. Andi Matichak is brilliant as Allyson as Strode’s granddaughter/Karen’s daughter as a teenage girl who is still trying to get to know her grandmother while would also have an encounter with Myers late in the film as she realizes what she has to do. Judy Greer is amazing as Karen Nelson as Strode’s estranged daughter who still harbors some resent towards her mother over how she was raised until she becomes aware of Myers’ presence prompting her to join her mother and take action.

In the role of Michael Myers, James Jude Courtney and Nick Castle are incredible in playing the character with the latter providing a brief appearance of Myers on a window and through his breathing while the former does much of the physical work and eerie presence that is crucial to the character as this killer who refuses to die. Finally, there’s Jamie Lee Curtis in a phenomenal performance as Laurie Strode as a survivor of Myers’ killing spree 40 years before who has become a troubled woman with PTSD and bad memories as she is aware that Myers will return as she is ready for him to come back and finish the job as it is a new layer to an iconic character that only Curtis could bring.

Halloween is a sensational film from David Gordon Green that features a great performance from Jamie Lee Curtis. Along with its ensemble cast, low-key approach to suspense and horror, study of trauma and fear, mesmerizing visuals, and a chilling music score. It’s a film that feels like a true sequel/companion piece to the 1978 film by John Carpenter as well as being a horror film that is more about atmosphere and characters rather than cheap scares and gore. In the end, Halloween is a phenomenal film from David Gordon Green.

This could've bombed so badly and it didn't. I'm glad for that. It's sad to see how paranoid Laurie is now, but who could blame her?

I think I will try to see this one at some point. I'm named for the woman. At one point I felt a weird connection to the franchise.

@Brittani-I know. Plus, given the circumstances of how nuts Myers is. What would you do if you know he's going to come back? I'd make sure I have a tank or something to run over that motherfucker.

@Jay-See it, it's the closest thing to the original film as I'm just glad it had some involvement from John Carpenter.

Interesting what they did with the PTSD though should have logically ended in 1998 with the climax of Halloween H20. But if there's still money to be made, who knows how many more there'll be!

@@Chris-Halloween H20 was alright but it's not a true sequel to the original 1978 film as I feel like this film is the closest thing to the original.