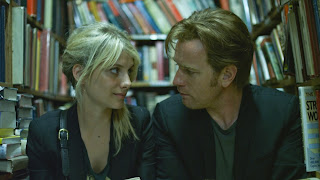 Written and directed by Mike Mills, Beginners is the story of a man reflecting on his father’s final years while forging a new relationship a young woman. The film also reveals the man coming to term with his father’s news of announcing that he’s gay. Starring Ewan McGregor, Melanie Laurent, Goran Visnjic, Mary Page Keller, and Christopher Plummer. Beginners is an extraordinary film from Mike Mills.

Following the death of his father Hal (Christopher Plummer), Oliver (Ewan McGregor) tries to come to terms with his father’s death as well as the news that his father came out of the closet years ago after the death of his mother Georgia (Mary Page Keller). While Oliver reflects on his father’s final years as a gay man and a young lover named Andy (Goran Visnjic), Oliver spends most of time with his father’s dog Arthur while working as an artist. At a costume party, Oliver meets a French actress named Anna (Melanie Laurent) as the two hit it off. While embarking on a relationship, Oliver continues to reflect on his relationship with his father while helping Anna deal with her own issues with her father.

The film is really an exploration of a man coming to terms with his father’s death and those final years when his father declared himself to be openly gay. Through a reflective narrative that moves back and forth told from the perspective of Oliver, it reveals how Oliver felt about his father’s coming out as he also reflects on his time as an adolescent (Keegan Boos) when he’s with his mother. During this period of reflection and mourning, Oliver meets Anna who represents a change in his life as she is someone who is quirky but also caring while admitting to having her own personal issues.

Mike Mills’ screenplay revels in its unconventional narrative style as it moves back and forth from Oliver’s past to his time with Anna. Notably as it features Oliver discussing about his parents’ marriage as he wonders if Hal really did love Georgia. This would impact Oliver’s relationship with Anna as she is also someone who is quite complicated as she doesn’t feel comfortable talking about her dad. Once the story progresses where Oliver reflects on Hal’s final moments with Andy and other gay friends, Oliver would get to know his father as it would definitely give him ideas about his own relationship with Anna.

Mills’ direction is quite straightforward in terms of its presentation but he does allow a lot of stylistic touches in the film. Notably the montages of collages to represent Oliver’s narration about the times his parents lived and such. The direction has Mills create a lot of interesting compositions in the way he shoots his actors in a scene and have them be natural in their surroundings as well as moments. Even as it plays to a lot of humor that isn’t forced or low-key to maintain the natural tone of the film. Overall, Mills creates a very fascinating yet poignant film about love and reflection.

Cinematographer Kasper Tuxen does excellent work with the film‘s photography by creating dazzling lighting schemes to play up the beauty of the locations set in Los Angeles. Editor Olivier Bugge Coutte does brilliant work with the editing by utilizing stylistic-jump cuts to play out the humor and collage montages as well as creating wonderful transitions to move the story back and forth. Production designer Shane Valentino and Coryander Friend do nice work with the look of Hal’s home as well as Oliver’s home and the hotel room that Anna stays in.

Costume designer Jennifer Johnson creates some amazing costumes for the film‘s costume parties scenes as well as the stylish dresses that Anna wears. Sound designer Leslie Shatz does terrific work with the sound from the atmosphere of the places that Oliver and Anna go to the more quiet moments involving Oliver and Hal. The film’s music by Roger Neill, Dave Palmer, and Brian Reitzell is superb for its plaintive, piano-driven score with elements of jazz and classical to play up some of the film‘s melancholia. Music supervisor Robin Urdang creates a very diverse soundtrack that features an array of styles from jazz, rock, pop, and electronic music to play out the different time periods the characters encounter.

The casting by Nicole Daniels and Courtney Sheinin is great for the ensemble that is created as it features appearances from Kai Lennox and China Shavers as friends of Oliver and Lou Taylor Pucci as a magician at the party where Oliver meets Anna. Small roles from Keegan Boos as the young Oliver and Mary Page Keller as Oliver’s mother Georgia are wonderful to watch as is Goran Visnjic as Hal’s younger boyfriend Andy. One performance that is a joy to watch is the Jack Terrier Cosmo as Hal’s dog Arthur as he has some great moments that are just fun to watch.

Christopher Plummer is phenomenal as Hal where Plummer brings an enthusiasm and energy that is compelling to watch as a man discovering the joys of being openly-gay while coming to terms with everything he had lost as it’s really one of Plummer’s great performances. Melanie Laurent is incredible as the whimsical Anna by displaying a great sense of charm and wit to her performance that is also balanced by her own melancholia. Finally, there’s Ewan McGregor in a fantastic performance as the reflective Oliver as McGregor brings a great sense of restraint as a man mourning the loss of his parents while dealing with the new relationship he’s embarking on as he also brings some joy to the character that gives McGregor one of his finest performances.

Beginners is a charming and captivating film from Mike Mills that features marvelous performances from Ewan McGregor, Melanie Laurent, and Christopher Plummer. The film is truly one of the most intriguing pieces about coming out and understanding told from a man reflecting on his father. It’s also a nice romantic comedy of sorts that doesn’t play to conventions while reveling in its naturalistic tone. In the end, Beginners is a superb film from Mike Mills.

Plummer got the nomination, but it was MacGregor that really impressed me with his work in this film. I felt he got overlooked.

Great flick. It made me appreciate life a bit more at the time that I watched it and made me realize that McGregor still has it in him for another great performance. Nice review Steve.

@Chip-I agree that McGregor was overlooked. He had the most difficult role as he rose up to the challenge.

@Dan-McGregor is a guy who is always good when given the right material. He needs to be in better films.

I have yet to see this movie, and I really want to, I should get the DVD soon! I also think Ewan McGregor is a rather underrated actor, I wish he got more recognition!

@Diana-Ewan I think should be bigger right now. The guy has the chops. It's just that he hasn't been in a lot of good Hollywood fare.