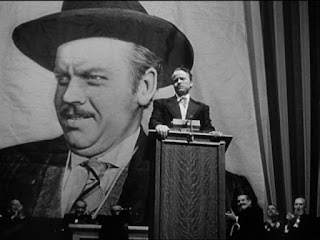 For anyone that watches films. There is always a never-ending of films to see. A lot of which are films that people haven't seen or those they don't seem to be interested in. While there is always a film by a filmmaker one wants to discover or to complete an entire filmmaker's work. There is always something to see that can be a discovery. One of these advantages of going blind into something that has never been seen is to discover something. This is something Ryan of The Matinee has been doing by making a list of films to see for the year and discuss it at the last Tuesday of every month. Here's what he says:


“Cull together a list of “Blind Spot” films…movies that we as movie enthusiasts likely should have seen by now, but haven’t for one reason or another. After narrowing the list down to a truly manageable twelve titles, the goal would be to watch all twelve over the course of the next year, and to write one’s thoughts afterwards.”

Well, there's 12 films to select and in the span of an entire year. That doesn't seem hard. There's lots of time and there's always a goal in the end. For me, I've seen a good amount of films by certain filmmakers and in various genres yet there is always a hole in those that I had never seen. Part of the idea of being a cinephile, film buff, or whatever is to find films and genres that one has never seen. Therefore, I have selected 12 films I will be watching for 2013 in the hopes of making some new discoveries or to fulfill gaps in the filmography of a filmmaker. Here are the 12 Films:

A Woman Under the Influence

Lovers on the Bridge

A really nice, and diverse, selection of titles. I just watched Lovers on the Bridge last week, cannot wait to read your take on the film.

The other titles on your list that I have seen include: Stagecoach, Battle Royale, Sunset Boulevard, Citizen Kane, and A Woman Under the Influence.

Battleship Potemkin is on my 2013 Blind Spot list as well (which will be unveiled in January).

I might just follow Ryan's idea as well, and post my own 2013 blindspots list. As you say, 12 films is not a lot. At the moment, Billy Wilder is a director I want to explore.

I look forward to your thoughts on The Decalogue, you probably know I've been covering that.

@CS-I wanted to do something that would give me focus as there will be a lot of films for me to see. These 12 are something I just want to fulfill.

@Chris-Billy Wilder is another filmmaker I want to explore. In fact, since I'm going to do Sunset Boulevard, I might do more Wilder films in the process.

I read your piece on The Decalogue. Great stuff, that's the one I'm eager to do so I can finish up on some Kieslowski.

Nice, eclectic mix of flicks here. A Woman Under the Influence is one of my absolute favorites. I’ll be really curious to hear your thoughts on The Decalogue. Enjoy!

@Alex-I had never seen a film by John Cassavetes so I figured it's time to watch some Cassavetes films.

Also, I've already seen Trois Couleurs and The Double Life of Veronique. I might as well tackle The Decalogue.

Red Beard and The Decalogue are also on my 2013 list.

Sunset Boulevard,A Woman Under the Influence and Floating Weeds are my faves here.

@David-Oh... you're participating in the Blind Spot thing too?

Great list! You've got some big-time classics mixed in with some other really strong movies. One of my favorites of all time is on there. It's not Citizen Kane, though I do really like that film. I've seen seven of your picks, and there is one that I found pretty dull, but it's very well-liked overall. Looking forward to checking out your posts!

@Dan-Thank you. I'm really looking forward to doing this.