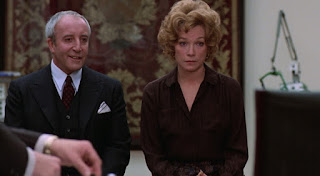 Based on the novel by Jerzy Kosinski, Being There is the story about a simpleton gardener with no background and no past as he encounters the wife of a political figure as his colleagues mistake him for someone who could be a political adviser. Directed by Hal Ashby and screenplay by Kosinski and Robert C. Jones, the film is a continuation of Ashby's themes of naive men who step into a world they don't know about only to be confused as the focus is on a middle-aged gardener named Chance played by Peter Sellers. Also starring Shirley MacLaine, Jack Warden, Melvyn Douglas, Richard Dysart, and Richard Basehart. Being There is a witty yet captivating film from Hal Ashby.

For all of his life, Chance is just a simple-minded gardener whose only knowledge of the outside world was through radio and later television as he works for a rich benefactor while always being in the care of a maid named Louise (Ruth Attaway). When the benefactor dies and Louise leaves, Chance is suddenly forced out of his home by two real estate agents in Sally Hayes (Fran Brill) and Thomas Franklin (David Clennon) where he takes a step into the outside world for the very first time with a suitcase, an umbrella, and a remote control. While walking around Washington D.C. where he stops at a TV shop, he is accidentally hit by a car owned by the wife of a millionaire in Eve Rand (Shirley MacLaine). She takes Chance to her home where she misinterprets his name as Chauncey Gardiner where she takes him to Dr. Robert Allenby (Richard Dysart) to look over Chance as he's is the caretaker for the ailing millionaire Benjamin Rand (Melvyn Douglas).

With Chance at the home of the Rands to recover from his injury, he meets Benjamin where the two have a conversation where Ben mistakes Chance's simple ideas about gardening as political rhetoric that intrigues the millionaire who also has political connections. Chance becomes an inspiration for Ben while Eve is also in awe of Chance though he does nothing but watch TV as Ben later introduces Chance to President (Jack Warden) who is impressed by Chance's words as the President also mistakes it for political rhetoric. With Chance becoming a political messiah of sorts as he becomes a celebrity of sorts though only a few know who he really is. With Ben nearing death, Eve accompanies Chance to a party where a Soviet ambassador (Richard Basehart) believes that Chance's statements are influenced by Russian literature. With Eve falling for Chance as political figures try to make their move as the President's approval rating is in decline. Dr. Allenby makes a discovery of who Chance really is as no one is aware about everything Chance had been saying all along.

While the film has a softness that a more hardline audience will find to be overly sentimental, Ashby delivers a solid direction in finding the humor and idiocy of politics and the media itself. Ashby is a master of satire but here, he chooses a simple protagonist whose lighthearted innocence and mild-mannered intelligence who looks into the world of our eyes. Yet, it's the kind of protagonist that most films would expect since he is a childlike man who doesn't know very much. In many ways, Ashby is Chance because he likes to watch. It's probably the most personal film of Ashby's career, especially since it's about a decade that he has watched all of these years fall into decline. It's really a film about a man watching a time, idealism, and a nation going into decline with the world itself not getting any better with no power or mind to do anything.

The strength of the film also goes to its script by its novelist Jerry Kosinski who brings in a mix of humor and melancholia. The film also attacks the cynicism of the 1970s after the fallout of Vietnam and Watergate with a hope for optimism. Yet the film's surreal and memorable ending shows a lot of things including the end of an American innocence to be replaced by something worse as a major character dies with the film's final line of "Life is a state of mind". In many ways, this story is years ahead of its time. Especially since the state of the nation that we live in is led by not just a soulless idiot but one who doesn’t have the honesty or heart that Chance the Gardner possesses. The script isn't just satire but an attack of everything that the 70s represented in the course of its behavior and political rhetoric which made the 80s to be a decade of mindless decadence. There, Ashby and Kosinski capture the future just before it was about to happen.

Helping Ashby in bringing is quirky yet melancholic vision is cinematographer Caleb Deschanel who brings a richness and elegance to many of the film's interior scenes that captures the world of upper-class society and its alien-like tone to the eyes of Chance. Production designer Michael Haller and art director James Schoppe help capture the film’s dark-colored look of wooden furniture and look that shows the upper class world with the wood being the only thing that Chance seems to know. Even the elegant costumes by May Routh shows that richness, notably on how well-dressed that Chance is since he's the only who seems to be comfortable in those close. The film's music score by Johnny Mandel has a sad, melancholia since it conveys the innocence of Chance but also the doom he is about to face when he is about to become something he's unaware of.

The casting in the film is awe inspiring with some nice performances from Fran Brill and David Clennon as the baffled estates people who are dumbfounded by a simpleton with Richard Basehart bringing in a slightly, humorous performance as the Russian premier. Ruth Attaway stands out as the maid Louise with her maternal presence for Chance and as she sees him, she displays the cynicism of how the media and culture acts towards Chance as a messiah. Richard Dysart is excellent in the role of Ben Rand’s ever-suspecting doctor who wants to know the truth but doesn’t want to harm anyone in a masterfully executed performance. Jack Warden brings humor to his role as the President in a performance that is expertly handled as a man of power with a lot of flaws that is handled realistically. Melvyn Douglas gives a fascinating performance as a dying man who finds hope in Chance while realizing about his own fate and regrets.

Shirley MacLaine gives an understated and elegant performance as a woman who is about to become a widow while finding new hope in a man like Chance. MacLaine brings a sweetness to her performance while channeling one of her most hilarious moments in one of the film's funniest scenes. Then there's Peter Sellers in what is probably one of the best performances ever assembled on the screen. Sellers brings a restrained, subtle performance as a simpleton who isn't very smart but isn't a bad man either. He brings a childlike innocence and a well-mannered tone to a man who doesn't have much to offer or say anything profound but his kindness is so enchanting, you can't help but fall for a man like Chance. Sellers could've gone for slapstick for this role but instead, he shows a soul that is filled with sadness and heartbreak in each frame. Even in the film's final moments as he becomes unaware of what is laying ahead for him. It's one of the most spellbinding performances of the decade.

Being There is a sensational and extraordinary film from Hal Ashby that features a mesmerizing performance from Peter Sellers. Along with great supporting work from Shirley MacLaine, Melvyn Douglas, Richard Dysart, and Jack Warden. It's definitely a very witty yet touching film that is both satirical but also heartwarming in its subject matter and characters. In the end, Being There is a wonderful and entertaining film from Hal Ashby.

This movie has probably my favorite Sellers performance.

"Sellers could've gone for slapstick for this role but instead, he shows a soul that is filled with sadness and heartbreak in each frame."

Agreed, 100%. But Sellers is generally the master of that art. I mean when you think about it, even his performance in a satirical film like The Party is anything but slapstick, and there are so many ways in which he could have gone slapstick there.

I love him. He had such a knack for dramatizing comedy and balancing both to perfection.

I wrote a very long comment and it disappeared :(
The gist of it was that I agree a 100% with this bit: "Sellers could've gone for slapstick for this role but instead, he shows a soul that is filled with sadness and heartbreak in each frame"

Sellers was a master at that. Even in a film as satirical as The Party with so much room for slapstick he made his performance delicate and touching. He had a knack for dramatizing comedy to perfection.
Possibly my favourite actor and this is one of his very best performances.

@Dave Enkosky-I would probably say Dr. Strangelove is my favorite Sellers performance but this one is a very close second. It's so moving at what he did. Have you ever seen The Life and Death of Peter Sellers w/ Geoffrey Rush in the role? It's a very superb bio-pic on the man.

@Amir-Sellers is a chameleon when it comes to acting and he's great at that. He should've won the Oscar for this role.

Ugh, so my comment was posted after all.
Anywayy, I agree. I like him more than Hoffman in Kramer too.

@Amir-Nothing against Dustin Hoffman but Sellers but on an acting clinic with that performance.