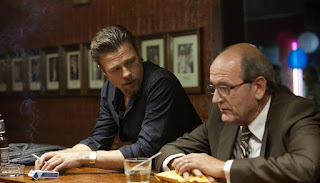 Based on the novel Cogan’s Trade by George V. Higgins, Killing Them Softly is the story of an enforcer who is hired to track down a few criminals who had stolen money from a mob protected card game. With the help of a few people, the enforcer has to find these criminals just as the criminal economy is going into collapse. Written for the screen and directed by Andrew Dominik, the film is an exploration into the underworld and its connection with the financial collapse of 2008 during a transition of power from George W. Bush to Barack Obama. Starring Brad Pitt, Scoot McNairy, Ben Mendelsohn, Richard Jenkins, James Gandolfini, Ray Liotta, and Sam Shepard. Killing Them Softly is a dark yet harrowing crime film from Andrew Dominik.

What happens when a couple of young, idiotic criminals decide to rob a protected Mob card game for their boss and it attracts the attention of a mob enforcer? That’s the simple premise of the film as it is about this enforcer trying to find out who robbed this card game and who is responsible for letting all of this happen. Leading the story is this enforcer Jackie Cogan (Brad Pitt) who is hired by a mob mouthpiece named Driver (Richard Jenkins) to find the two men (Scoot McNairy and Ben Mendelsohn) who robbed this game as everyone else is already looking at Markie Trattman (Ray Liotta) who had robbed his own card game years ago. Trouble is already brewing as the enforcer hires a hitman named Mickey (James Gandolfini) to deal with the situation but he’s falling apart as the 2008 financial collapse starts to affect everyone.

Andrew Dominik’s screenplay is about a world where at a time when things are definitely falling apart as the world of the mob isn’t going so well due to the recession as everyone needs money. One of which is this mob boss who asks one of his men to rob a card game as he brings in his heroin-addicted friend to do the job and steal the money. The job goes well but it ends up creating a whole lot of trouble as Jackie Cogan is hired to handle the situation only to realize that the few people he’s hired to handle things are incapable. Notably this aging hitman who is dealing with a divorce, financial troubles, legal issues, and all sorts of things as it becomes clear that Cogan has to do things himself. Of course, situations arise as it becomes more complicated due to the recession.

Behind this story of a mob enforcer trying to get rid of trouble is this financial collapse where mobsters are having money trouble. They can’t pay to maintain their lifestyle. The jobs they’re hired to do has them taking money for very little and they’re dealing with the idea that there’s no money around. Throughout the film, there’s TV footage of George W. Bush trying to calm the people about the financial situation while there’s an election happening. For these mob guys, it starts to affect them as they live outside of the law as they’re struggling to keep things secretive while they’re being hit by this heist that is ruining them.

Dominik’s direction is very engaging in how he creates a film that isn’t just a dark, gritty crime film set in 2008 New Orleans. It’s also a film that is about a world that is outside of the typical American lifestyle that most people live in. Through a lot of eerie compositions in medium shots, slow dolly tracks, and other intimate camera movements. Dominik creates something that is more low-key but also filled with a lot of dark humor considering that one of the robbers is a complete dumbass too fucked-up on dope. There is also a sense of nostalgia in the way Mickey talks about when times were simpler and things were good as he is definitely falling apart on all levels and the economic troubles has now affected him.

It’s not just this dark backdrop of political and social commentary that makes the film so intriguing but also the way the mob conducts their life in a secretive way. Because a robbery like this has happened before and a man like Trattman is clearly the target. Panic is already happening as everyone is pointing the fingers at him even though he did nothing wrong. Still, it could’ve been prevented as it forces this enforcer to just handle things. There is never a moment in the film where it’s all sunshine and rainbows as the setting in 2008 New Orleans just adds to the bleak tone of the film. Then comes the ending where it revels not just in cynicism but also a grim reality that is faced in the aftermath of this financial collapse where times are about to change. Overall, Dominik creates a very fascinating yet unsettling crime film that explores a world coming undone by changing times.

Cinematographer Greig Fraser does excellent work with the film‘s very bleak look from the usage of grayish colors in the daytime scenes to more exotic yet low-key lighting schemes for the scenes at night. Editors Brian A. Kates and John Paul Horstmann do nice work with the editing to play out the suspense while a lot of it is more methodical though some parts of the film lag a bit. Production/costume designer Patricia Norris and set decorator Leslie Morales do wonderful work with the set pieces such as the card game room and ruined houses while Norris also provides the costumes where a lot of it just casual.

Visual effects supervisor Dottie Sparling does terrific work with the few visual effects such as some of the slow-motion killing scenes in the film. Sound designer Leslie Shatz and sound editors Robert Jackson and Thomas O’Neill Younkman do great work with the sound from the way the radio and televisions belt out the political speeches in the background to some of the more chilling scenes in some of the film‘s violent moments. Music supervisor Rachel Fox creates a superb soundtrack that features a wide array of music from Barrett Strong, Johnny Cash, the Velvet Underground, Petula Clark, and all sorts of genres from pop, hip-hop, and ambient music.

The casting by Francine Maisler is brilliant for the ensemble that is created as it features some noteworthy small roles from Sam Shepard as a veteran enforcer named Dillon, Slaine as a hoodlum named Kenny Gill, Max Casella as a hood named Barry Carpio, and Vincent Curatola as a crooked mob boss who organizes the heist. Ray Liotta is excellent as Markie Trattman who finds himself in big trouble over the heist as people begin to distrust him. James Gandolfini is great as the hitman Mickey who arrives to do a job only to drink a lot and dwell on the old times when things were great. Ben Mendelsohn is superb as the dim-witted heroin-addicted thug Russell who can be professional but also very stupid as he is considered a liability. Scoot McNairy is wonderful as the more professional but naïve Frankie who realizes the kind of trouble that is happening as he tries to deal with the implications he’s facing.

Richard Jenkins is amazing as Driver who is the conscience of sorts in the film as a mob mouthpiece who only talks to Cogan about the targets and what to do as well as being someone who knows that things are changing in the world. Finally, there’s Brad Pitt in a chilling performance as Jackie Cogan where Pitt displays a restraint to a man who likes to get things done only to realize that there’s problems as he has to do things himself where Pitt adds a dark tone to his role as well as cynicism that is more surprising for a character that isn’t likeable at times.

Killing Them Softly is an ominous yet intoxicating crime-drama from Andrew Dominik that features marvelous performances from Brad Pitt, Richard Jenkins, and James Gandolfini. While it is a very unconventional film that explores a world falling apart by changing times and an economic recession. It’s a film that does carry a lot of commentary about the way the underworld works as well as how they can be affected by the world outside. In the end, Killing Them Softly is a remarkable film from Andrew Dominik.

The political-message was a tad annoying at times, but really didn't get in the way of this story for me and instead, left me happy with just about everything I saw, especially the performances. Good review Steve. Mine will be up tomorrow, so definitely look for it if you can.

Good review Steve. But you seem to have liked it a lot more than I did. I thought the characters were too unidimensional and the script needed a little more juice. Opposite to Dan, I think that the political message was probably the best thing and that the parallel could have been bolder and let off little of the useless puns at other films. I liked the bitter use of music though!

@Dan-I saw your review and excellent as usual. I wasn't annoyed by the politics as I saw as something the mobsters are watching as they're aware that this financial crisis was affecting them as well.

@Michael Parent-There were times that some of the monologues went a little long. The characters themselves though I knew were not going to be conventional they all are despicable people but they live in a world that is starting to crumble at the time. Plus, I heard there was supposed to be a longer cut of this film but Dominik ended re-cutting it even more.

A longer cut would probably save the film. I felt that some elements needed to be more developped and it might help to "get" the fauna of characters and "like" them a little bit much and actually care for them.

@Michael Parent-I would've loved the film to be longer just so I can understand more about the lifestyle of the criminal and such.

"Ominous yet intoxicating," fuck, that's just brilliant. I agree with your review, an unconventional crime drama, but a fine one at that. I really loved everything about it. Definitely not for everyone, but a flick that feels specifically tailored to my tastes.

@Alex-I rather see a film that doesn't play into conventions and want to take the viewer somewhere else.

Audiences today are very dumb. That's why I never trust CinemaScore or whatever that bullshit is called.