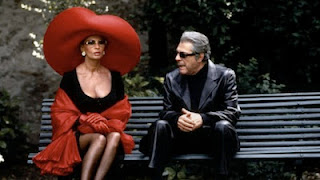 Directed by Robert Altman and written by Altman and Barbara Shulgasser, Prêt-a-Porter is the story about a group of very different people who attend Fashion Week in Paris as some are reporting the events while some are just attending to see what is out there. The film is an exploration into the world of fashion that involves many people in the course of a week. Starring Marcello Mastroianni, Sophia Loren, Julia Roberts, Tim Robbins, Kim Basinger, Lili Taylor, Jean-Pierre Cassel, Chiara Mastroianni, Linda Hunt, Sally Kellerman, Stephen Rea, Anouk Aimee, Tracey Ullman, Rossy de Palma, Forest Whitaker, Rupert Everett, Lyle Lovett, and Lauren Bacall. Pret-a-Porter is a witty yet chaotic comedy from Robert Altman.

The film is about many different groups of people attending Fashion Week in Paris where a lot is happening while a prestigious fashion president had died believing that he had been murder. In the course of the film, a lot happens as a fashion TV reporter covers the events that is happening while lots of affairs between fashion designers are happening. Two American journalists are forced to share the same hotel room while covering what is happening and a fashion designer is dealing with possible bankruptcy. Fashion magazine editors spar with each other to go get a prestigious photographer while a woman goes on a shopping spree around the city. All in the course of an entire week as it leads to a climatic fashion show where a designer presents the ultimate show in grand style.

The screenplay by Robert Altman and Barbara Shulgasser doesn’t really have any kind of singular plot as it’s all about the chaos of Fashion Week. Notably as there’s journalists trying to cover the event and make sense of it as it involves a New York Times photographer (Lili Taylor) and a fashion TV reporter named Kitty Porter (Kim Basinger). Yet, there’s also this story about this French fashion president in Olivier de la Fontaine (Jean-Pierre Cassel) who meets a mysterious man named Sergei (Marcello Mastroianni) where something happens leading to de la Fontaine’s death as his wife Isabella (Sophia Loren) seems relieved though is lover in fashion designer Simone Lowenthal (Anouk Aimee) is saddened as she is dealing with losing her business where her son Jack (Rupert Everett) does something that will save her business but with some reservations. Things get crazier as two different American journalists in Anne Eisenhower (Julia Roberts) and Joe Flynn (Tim Robbins) are forced to share a hotel to cover what’s been happening.

Altman’s direction is definitely engaging for the way he explores the world of fashion and what goes on in Fashion Week. Taking on a style similar to cinema verite, Altman captures all of the craziness that occurs while going inside into what goes in the world of fashion as shows are being prepared and such. Notably as the film features cameos from celebrities, models, and fashion designers as they’re part of this crazy yet fascinating world. The direction is also intimate and straightforward for scenes inside the hotel rooms and offices where many people work out as well as some moments in the fashion runway. It is still about the show and the world that is happening which also includes Sergei trying to contact Isabella as they’re revealed to be former lovers. Their scenes together is essentially an ode to their appearance in Vittorio de Sica’s 1963 film Yesterday, Today, and Tomorrow. While it’s a film that can be described as a rambling mess due to the many storylines that happens. It is still a very enjoyable and very exhilarating film from Robert Altman.

Cinematographers Jean Lepine and Pierre Mignot do excellent work with the look of Paris during Fashion Week with its many landmarks as well as the scenes inside the fashion shows and some of the film‘s interior settings. Editors Geraldine Peroni and Suzy Elmiger do wonderful work with the editing to capture the sense of chaos that occurs in the world of fashion as well as more straightforward moments in the intimate scenes. Production Stephen Altman, with set decorator Francoise Dupertuis and art director William Abello, does nice work with the looks of the hotels and the runway shows that occur including the very street-based show one of the designers at a metro.

Costume designer Catherine Leterrier does terrific work with the non-designer clothes some of the characters wear to maintain their lack of style while most of the characters wear clothes that display their unique personalities. Sound editor Skip Lievsay does superb work with the sound to capture the atmosphere of the runway shows to the chaos in some of the parties. The film’s music by Michel Legrand is delightful for its playful piano pieces and other cuts to play out the humor. Music supervisor Allan F. Nichols creates a fantastic soundtrack that features music from Massive Attack, Bjork, U2, Ini Kamoze, Salt-N-Pepa, the Rolling Stones, M People, Janet Jackson, the Cranberries, Pizzicato Five, Robert Palmer, Grace Jones, and many others to capture the spirit of the fashion world.

Sally Kellerman, Linda Hunt, and Tracey Ullman are great in their respective rules as the dueling magazine editors Sissy Wannamaker, Regina Krumm, and Nina Scant who all try to nab Stephen Rea’s very devious photographer Milo O’Brannigan who would provide a prank of his own all three where Rea is very funny. Lauren Bacall is wonderful as the colorblind fashionista Slim Chrysler while Lyle Lovett is terrific as the cowboy boots designer Clint Lammereaux. Julia Roberts and Tim Robbins are excellent as the dueling journalists Anne Eisenhower and Joe Flynn where they eventually fall for each other as they share a hotel room together. Lili Taylor is superb as the NY Times photojournalist Fiona Ulrich while Kim Basinger is hilarious as the somewhat dim fashion TV reporter Kitty Porter. Forest Whitaker and Richard E. Grant are fantastic in their respective roles as fashion designers in the street-wise Cy Bianco and the snobbish Cort Romney.

Rupert Everett is pretty good as the slimy Jack Lowenthal who does something without his mother’s consent while Anouk Aimee is phenomenal as the respected fashion designer Simone Lowenthal who deals with Olivier’s death as well as the prospect of losing her business. Finally, there’s Marcello Mastroianni and Sophia Loren in marvelous performances in their respective roles as Sergio/Sergei and Isabella where they play former lovers who finally meet after many years where Mastroianni brings a lot of humor with Loren bringing an element of class to her role as well as a sexiness that is still captivating.

Pret-a-Porter is an excellent film from Robert Altman. Featuring a wild ensemble cast full of actors, models, fashion designers, and all sorts of people. It’s a film that captures the craziness that is Fashion Week while taking time to inject humor into that world. While the film is a bit of a mess, it is still enjoyable for the way Altman explores a world that is fascinating. In the end, Pret-a-Porter is a remarkable film from Robert Altman.

It's encouraging to see you liked this film since it is pretty much reviled.

I don't understand why it was reviled. I thought it was really funny. I don't think it was poking fun at the world of fashion but rather showcase the chaos of it with a bit of humor.

Plus, how can you not enjoy that striptease from Sophia Loren? She's still got it!

Sophia strip teases? It already moved up on my watch list.
The film does look like silly fun. Sometimes the best kind of fun there is.

@Teddy Casimir-It's the highlight of the film though it's really more of an ode to a film she did with Marcello Mastroianni years earlier but it's pretty funny.