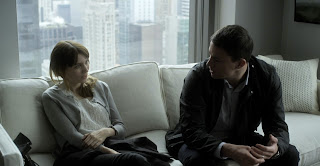 Directed by Steven Soderbergh and written by Scott Z. Burns, Side Effects is the story about a troubled woman who is given a medication to deal with her anxieties following her incarcerated husband’s return only for something to go wrong as the psychiatrist who gave her the prescription finds himself in trouble. The film is an exploration into the world of prescription drugs as well as anxiety as it revolves a young woman dealing with her issues. Starring Rooney Mara, Jude Law, Channing Tatum, Vinessa Shaw, Ann Dowd, Polly Draper, and Catherine Zeta-Jones. Side Effects is a chilling yet suspenseful film from Steven Soderbergh.

When one suffers from depression over the return of a loved one, what happens when a psychiatrist gives a prescription where it has serious side effects that causes problems? That is the idea of the film as it is about this troubled woman named Emily Taylor (Rooney Mara) as she sinks into severe depression following the return of her husband Martin (Channing Tatum) from prison for insider trading. After a suicide attempt, Emily meets Dr. Jonathan Banks (Jude Law) who examines her and, under the suggestion of her previous psychiatrist in Dr. Victoria Siebert (Catherine Zeta-Jones), gives her a medication in hopes that it will curb her depression. Instead, something goes wrong where Emily doesn’t remember what happen as questions are raised about the prescription Dr. Banks gave her as he is targeted for what happens. With his life and profession in danger, Dr. Banks has to see if it was the drug that got Emily in trouble where he makes discoveries over what really happened.

Scott Z. Burns’ screenplay doesn’t just explore the world of pharmaceutical drugs and the effects it might have but rather what it does to a person who is clearly troubled. While Dr. Jonathan Banks’ intentions to help Emily were noble, giving her a prescription of a drug that he doesn’t know much about based on the suggestions of other people does put him into trouble over what happened to Emily. Largely as questions are raised over the prescription he gave her as Emily’s husband had complained to Dr. Banks about her sleepwalking though Emily believes the drug is helping her. With Emily already a victim over what happened and Dr. Banks trying to find answers over what he gave Emily. He then starts to question Emily’s former psychiatrist Dr. Siebert about the prescription that he suggested.

Dr. Siebert is an interesting individual who was the one who wrote about this prescription that Dr. Banks was suggested to as he would ask questions about Dr. Siebert’s history with Emily. Notably as she started to examine Emily shortly after her husband’s incarceration where Dr. Banks keeps asking questions about their sessions together. Eventually, it allows Dr. Banks to examine Emily more where he gets some big revelations about Emily’s history and other aspects about her life. Burns’ script does have a unique structure where the first half is about Emily and the second half being about Dr. Banks as its third act allows the two characters to collide and finally reveal the truth over the side effects that put both characters in trouble.

Steven Soderbergh’s direction is definitely entrancing for the way he explores the world of depression and pharmaceutical drugs. Notably as he shoots the film with a degree of style from the framing he uses to explore the intimacy that goes on with the characters to the way scenes are presented in different ways. Notably a scene where Emily and Martin are on a boat at a party where Emily is clearly uncomfortable as her depression starts to take her forcing Martin to comfort her outside. Soderbergh also uses an element of ambiguity that occurs in the film such as a scene of Emily sleepwalking that has Martin concerned. Through some medium shots and slanted camera angles, Soderbergh is intrigued by what is happening to Emily as the side effects of her medication start to affect her.

By the film’s second half, Soderbergh’s camera becomes more tighter as the drama surrounding Dr. Banks starts to unfold. There is tension that occurs as the cinematography under Soderbergh’s Peter Andrews alias isn’t as stylized and a bit straightforward to maintain the sense of reality that is happening in comparison to the more stylized look in the film’s first half. Also through the editing in his Mary Ann Bernard alias, Soderbergh also takes his time for the mystery to unfold as it concerns Dr. Siebert as she proves to be a foe for Dr. Banks. Even as it creates a chilling climax in which revelations are unveiled in the hopes that Dr. Banks could save himself from his troubles and actually help out Emily. Overall, Soderbergh crafts a very mesmerizing yet provocative thriller that explores the world of depression and pharmaceuticals.

Production designer Howard Cummings and set decorator Rena DeAngelo does excellent work with the set designs from the look of the offices that some of the characters work at to the look of Emily and Martin‘s apartment home. Costume designer Susan Lyall does wonderful work with the costumes to display the stylish look of Emily in the film’s first half to the more casual look of the characters in suits and such. Sound editor Larry Blake does amazing work with the sound to capture the atmosphere of the locations as well as the tension that occurs in some key scenes such as Emily‘s suicide attempt. The film’s music by Thomas Newman is brilliant for its haunting yet evocative score filled with unsettling string pieces as well as low key cuts to play out the drama as it includes some hypnotic yet throbbing percussive pieces that adds to the suspense.

The casting by Carmen Cuba is fantastic as it features some notable small performances from Polly Draper as Emily’s boss, Sheila Tapia as Emily’s attorney, Mamie Gummer as an old friend of Emily, and Mitchell Michaliszyn as Dr. Banks’ stepson Ezra. Ann Dowd is terrific as Martin’s mother while Vinessa Shaw is superb as Dr. Banks’ wife Deirdre who deals with her husband’s workload and the scandal that he’s been entangled with. Channing Tatum is pretty good as Emily’s husband Martin who is both baffled and concerned for Emily’s depression and the side effects of the medication as he is trying to get back the old life he and Emily once had.

Catherine Zeta-Jones is amazing as the very ambiguous Dr. Victoria Siebert as she suggests to Dr. Banks a new prescription that causes trouble as Zeta-Jones brings this very ice exterior to a woman who doesn’t like to reveal herself or her relationship with Emily as it’s one of Zeta-Jones’ finest performances. Rooney Mara is great as Emily Taylor as this very troubled woman who is dealing with depression as she is afflicted by the side effects of the prescription she’s given as she tries to deal with all sorts of things as it’s a very eerie performance from Mara. Finally, there’s Jude Law in a remarkable performance as Dr. Jonathan Banks as this psychiatrist who is trying to help this young woman only to get in trouble over the side effects of the prescription as he tries to find out more information about the prescription as it’s a very captivating performance from Law.

Good review Steven. It's chock full of wacky, wild, and fun twists that you never see coming, but the ones you do see, you still get a tad blind-sided by them. Hopefully, just hopefully, this isn't Soderbergh's last film, but something tells me we haven't seen the last of the dude.

Really enjoyed this flick, and I agree, if this is the end, then he went out swinging.

@Dan O.-I'm skeptical about whether or not that this could be his last theatrical film but at least it's a winner.

@Alex-If you're going to go out. Might as go out with style. And I'm seriously considering doing an Auteurs piece on Soderbergh for 2014.

@Alex-Well, he is among the 9 filmmakers so far that I want to profile for 2014. I've seen a lot of his work and could definitely catch up on what else he's done for the remainder of the year so it's very likely he'll be a subject for next year.