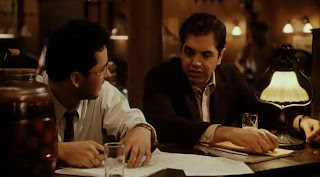 Directed by Woody Allen and written by Allen and Douglas McGrath, Bullets Over Broadway is the story about a young playwright eager to succeed on Broadway as he hires a gangster’s girlfriend to star in the play while working with a gangster escort on re-writes to make sure his play is a success. The film is an exploration into the world of theater as well as one trying to not make compromises with his art with the help of a man who unknowingly has the gifts to be an artist. Starring John Cusack, Dianne Wiest, Jennifer Tilly, Chazz Palminteri, Mary-Louise Parker, Tracy Ullman, Jack Warden, Jim Broadbent, and Rob Reiner. Bullets Over Broadway is a fantastic yet witty film from Woody Allen.

Set in the 1920s, the film explores a young playwright trying to stage a play without compromise as he is convinced that he’s an artist. In order to get his play produced that will feature a renowned diva, he reluctantly accepts his producer’s offer to put in a gangster’s girlfriend who wants to become an actress despite her lack of talent. The woman’s escort is a mob henchman who has to watch her all the time as he would eventually bring in some ideas that would not only change this writer’s play but also the idea about art and what it takes to be an artist. It’s a film that explores the world of a man trying to define himself as an artist as he is eager to succeed in his own terms but has a hard time making compromises. Especially as he is someone who has the talents to be a writer but is often bogged down by rules and ideas that seem detached from reality until this gangster’s henchman would be the one that would open the doors of the idea of art.

The screenplay by Woody Allen and Douglas McGrath not only goes into great lengths to explore the world of theater as well as what it takes to be an artist. It also showcases a world in which individuals all are taking part in a play as there’s egos involved and also the danger for the fact that only a few people know that funding this play is a gangster (Joe Viterelli). For David Shayne (John Cusack), it’s a compromise he has to live with for the sake of his career as he’s amazed by the gifted but boozy leading lady Helen Sinclair (Dianne Wiest). Yet, he has to deal with the gangster’s girlfriend Olive (Jennifer Tilly) who is determined to succeed despite the fact that she’s a loudmouth and isn’t very good though Shayne thinks there’s potential. Along with a brilliant but insecure leading actor named Warner Purcell (Jim Broadbent) and a supporting actress in Eden Brent (Tracey Ullman) who always carries her dog.

It’s a strange mix of people that are involved with this play as Shayne is also directing the play but his actors have a hard time connecting with the script until Olive’s bodyguard Cheech (Chazz Palminteri) would say things that he felt is hindering the story as he comes up with ideas that turned out to be great. It would prompt Shayne to secretly work with Cheech as the latter becomes more aware of his gifts though he still enjoys bumping people off. Once the story develops where Shayne becomes more confident in his work, there also comes the trappings of success where Shayne would alienate his longtime girlfriend Ellen (Mary-Louise Parker) while Cheech realizes what he must do in order for the play to become a big success as he cares more about its chance to be great. All of which would play into Shayne’s realization of what it means to suffer and sacrifice for your art.

Allen’s direction is truly exquisite in not just the way he presents the 1920s New York City and Broadway but also a period in time where a writer is trying to create something new without making compromises. While there’s an intimacy to the play that is present in the film, there’s also a sense of beauty for the scenes in the city including a moment between Shayne and Sinclair that has this gorgeous backdrop behind them. Allen also creates some unique compositions where he puts the actors in a scene while also using some moments of violence to play up that world of the gangster including the place where Cheech would kill people. It all would play into that world of art and a man’s desire to succeed as an artist where Allen would find ways to mesh humor and drama in the story while playing to that theme about art without doing it in an overbearing way. Overall, Allen creates a truly riveting film about a man’s desire to become an artist and the trappings of what one has to do to succeed as an artist.

Cinematographer Carlo Di Palma does brilliant work with the film‘s cinematography from the look of the nightclubs with its lights to some of the more low-key lighting schemes for the nighttime exterior scenes. Editor Susan E. Morse does excellent work with the editing to create some rhythmic cuts for some of the lively moments involving the gangsters while most of the cutting is quite straightforward. Production designer Santo Loquasto, with art director Tom Warren and set decorators Susan Bode and Amy Marshall, does amazing work with the set pieces from the look of the play and nightclubs to the home where Olive lives

Costume designer Jeffrey Kurland does fantastic work with the costumes from the clothes the men wear to the array of dresses the women wear to play up that sense of style. Sound editor Robert Hein does terrific work with the sound to play up the atmosphere of the theater along with the sounds of gunfire for the gangster scenes. The film’s soundtrack is wonderful for the music that is played that includes pieces by Cole Porter, Eddie Cantor, Al Jolson, the Gershwin Brothers, and Duke Ellington.

The casting by Juliet Taylor is superb for the ensemble that is created as it features some notable small appearances from Tony Sirico and Tony Darrow as a couple of henchmen, Debi Mazar as Cheech’s girlfriend Violet, Benay Venuta as a theater patron Shayne meets at a party, Rob Reiner as the writer Sheldon Flender who is also Shayne’s mentor, Harvey Fierstein as Sinclair’s agent Sid Loomis, Jack Warden as the play’s producer Julian Marx, and Joe Viterelli as the gangster Nick Valenti. Mary Louise-Parker is wonderful as Shayne’s girlfriend Ellen as a woman who supports Shayne until success comes in as well as his fascination with Helen Sinclair. Tracey Ullman is terrific as Eden Brent as a supporting actress trying to get her part to be good while bringing her dog whom Helen dislikes. John Broadbent is excellent as Warner Purcell as a gifted actor who takes a liking towards Olive while he is also revealed to be a compulsive eater.

Jennifer Tilly is amazing as Olive as a young woman who is determined to be an actress despite her lack of talents as Tilly brings a lot of humor and charisma to her performance. Chazz Palminteri is brilliant as Cheech as a gangster’s henchman who has a gift for coming up with great ideas as he becomes someone who realizes his gift as he does whatever it takes to make it be a big success. Dianne Wiest is fantastic as Helen Sinclair as a veteran actress who likes to drink but is also so gifted as she seduces Shayne in the hopes that she can become much bigger. Finally, there’s John Cusack in a marvelous performance as David Shayne as a playwright eager to succeed without compromises while dealing with some of his flaws as a writer as he hopes to finally create something that will be great only to deal with the other compromises he must face as a person.

Bullets Over Broadway is an incredible film from Woody Allen. Armed with a great ensemble cast, amazing set pieces, a fun soundtrack, and an intriguing take on the world of art. It’s a film that definitely stands as one of Allen’s triumphs as well as riveting period piece about a man trying to do something new in the world of theater. In the end, Bullets Over Broadway is a sensational film from Woody Allen.

Next to Owen Wilson I thought Cusack does a great job with the whole Allen persona without actually acting like him. Jennifer Tilly is awesome in this role and deserved the nomination or did she win. Not looking it up now. But this is a fun movie to watch. Even if you are not a woody Allen fan

It is a great movie. I liked Jennifer Tilly in this. She did get nominated but she lost to her co-star Dianne Wiest. Hey, at least Tilly got nominated and got some good work as well as being a skilled poker player. That doesn't hurt.