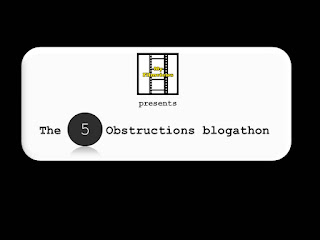 In the second part of Nostra’s Five Obstructions Blog-A-Thon, here is that next obstruction:

In this second assignment, the film I reviewed Clint Eastwood’s High Plains Drifter and the person that I’m going to interview is Chris from Movies and Songs 365 who has been embarking on a marathon of westerns.  (Warning, the interview contains spoilers about the film).

As you’re currently doing a marathon of westerns, what aspects have impressed you about the genre?

First of all, excellent questions. Well, I wouldn’t call myself an expert on westerns, even though I’ve watched a lot of them over the last year or two.

I don’t think there’re any big secrets as to what makes a great western. What impresses me is cinematography, acting, memorable characters, dialogue, action scenes that stay with you, perhaps a bit of humor.

An authenticity so you believe you are in the old west is maybe the most crucial element. That said, are westerns really depicting how it was? According to writer Eric Hobsbawm in his book Fractured Times (2013), he argues the invented tradition of the west is entirely symbolic, in as much as it generalizes the experience of a comparative handful of marginal people. Who, after all, cares that the total number of deaths by gunshot in all the major cattle towns put together between 1870 and 1885 – in Wichita plus Abilene plus Dodge City plus Ellsworth – was 45, or an average of 1,5 per cattle trading season, or that local western newspapers were not filled with stories about barroom fights, but about property values and business opportunities.

Hobsbawn calls these marginal characters refugees from civilization. Explorers who have established a symbiosis with nature. Representing the ideal of individualist freedom pushed into a sort of inescapable jail by the closing of the frontier and the coming of big corporations.

The outlaw, or marginal character Hobsbawn talks about, who doesn’t fit into society, and finds his own way, has always interested me in westerns.

In regards to High Plains Drifter, what made it stand out from the other westerns that you saw including the ones that also starred Clint Eastwood?

It has an unsettling, unpredictable, and dark atmosphere, which kept me on edge. You don’t know who to root for, let alone trust. The main character (Eastwood) is reckless and forward, yet also humorous and a problem solver, which is an unusual mix. It’s an interesting character study of a person, and a community, which you don’t always get from westerns. I liked how it asks how much would you surrender to protect your town? There’s a risk of exploiting the situation to his own personal advantage. Feels like Eastwood character requests townspeople to paint the buildings red, just to tease them, because he has the authority to. It’s like Eastwood took his character from Dollars Trilogy, made him a bit more flawed, and put him in a new situation. A film about how a lawless community can reach chaos, and how important law and order is.

It’s obvious that from the look of the film that Eastwood is definitely basing a lot of his styles on not just Sergio Leone but also Don Siegel as they were the two filmmakers who definitely shaped his career. Is there anything from those filmmakers that you noticed that Eastwood used in his direction if you’re familiar with either of those two men?

I can see the comparison to Sergio Leone, especially in that Eastwood plays a stranger with no name, who has a mysterious past. There are parallels to Fistful of Dollars (1964) certainly, in terms of story, and The Dollars Trilogy in general in terms of flashback. I'm not sure about editing, camera work and such, as I've not seen these movies multiple times.

Haven’t seen any Don Siegel films recently, I’m sure Eastwood learnt something from Siegel he could use as a director.

I would say High Noon (1952) could also have been an influence on High Plains Drifter, the sense of tension and dread about the return of a notorious criminal.  Or even Shane (1953), which plays out the stranger character, who arrives in a small community, and experiences hostility at the bar.

One of my favorite moments in the film is Dee Barton’s score which has this strange mix of being very eerie with its electronic presentation but also has this element of orchestral touches. How did you feel about Barton’s music?

I liked it, and agree it’s an eerie score, almost horror soundtrack, which adds to a sense of doom, that something bad is going to happen any moment. There are several dream-like sequences, the first is Eastwood sleeping in the hotel, and the eerie score plays. His dream is about a whipping of a Marshall, it appears this took place in the town prior to Eastwood’s arrival. It’s like he’s dreaming the past. Has he been told about the whipping on his travels? A brilliant and ambiguous sequence. Some have claimed on IMDb message board, that Eastwood's character could be somehow supernaturally connected with the Marshall, because the Marshall says "help me" in the dream. Clint supposedly had said that the stranger was supposed to be Marshall Jim Duncan's brother.

The second dream sequence happens, when the midget is hiding, it’s like the midget is having a flashback in his mind to the same whipping of the Marshall that Eastwood dreamt about. Again the eerie music is in the background. To see the anguish on the townspeople’s faces (or lack thereof), together with the eerie music, makes the whipping doubly intense. It’s like we are the victim on the ground, as the camera is whipped.

You told me when you suggested the film as you were doing your marathon that you were bothered by its portrayal of women. After seeing it, I too had some qualms about their portrayal. Especially in relation to some of the other westerns in which women actually did a bit more and some of them didn’t have them play damsels-in-distress or anything. In this film, you have a whore who is essentially trouble as she is raped by Eastwood’s character and later tries to kill him only to have sex with him later on just so she can pull a fast one on him. There’s also Verna Bloom’s character who I thought was underwritten and she didn’t get more to do other than sleep with Eastwood and leave her husband. Are there anything else in the film’s portrayal of women were you bothered by as well?

I read John Wayne was outraged at the insinuation of rape in the first 20 minutes, and it really is a controversial scene that can make you switch off the film. Though is it really a rape? Or does Eastwood’s character simply have great intuition for when a woman wants to surrender to him? She was leading him on, by bumping into him. Granted he was too forward sexually, he should have gone slower, and not treat it so casually. Maybe he thought she was a whore, but that’s no excuse to take advantage of her, when she said no. He acts very confidently the whole movie, not just with women.

But yes, even though she leads him on, she still tries to save her honor by shooting at him in the bath tub scene. When they side with Eastwood’s character in the rape matter, because they need him to protect their town, it really does make it tough to empathize with the townspeople. Shows how messed up the situation is, when they won't punish Eastwood, because he's useful to them.

How did you feel about the Mordecai character? I know there’s people who might feel offended by the word “midget” or “half-pint” but I thought he was a fun character to watch as he aided Eastwood. Were you offended by that character? 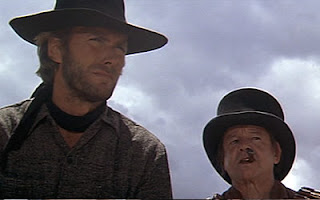 No , I wasn’t offended, in fact I think he was given a substantial role, with a good deal of screen time, and wasn’t there just for laughs, but as a real human being. He was kind of in a similar spot as the audience, the voyeur, curious about Eastwood’s character, and watching events unfold. What’s weird is the midget observes the rape and just accepts it, it doesn’t dissuade him from becoming friendly with Eastwood’s character. You could say he gives Eastwood’s character the benefit of the doubt, not judging him as the rest of the town did. The midget doesn’t ask him for any favors, and doesn’t want to exploit him, and I think that’s why Eastwood is friendly towards him, and awards the midget the sheriff badge, because he feels the midget is good-natured.

How would you rank this film with some of the other westerns that Eastwood did (not counting the godawful Paint Your Wagon)?

Even though High Plains Drifter is quite controversial, it’s right up there with his best, in my humble opinion. I haven't seen Pale Rider (1985), here's how I would rank westerns Eastwood has starred in:

Anyway, thanks for letting me take part in the obstruction blog-a-thon! I had fun with the interview.

Thanks for making those corrections. I would obviously add good story to the list of elements that impress me about westerns. Can't believe I left that out!
How about you, which aspects have impressed you about the genre? The same things? Or something I didn't list?

Just the mis-en-scene that is handled by some of its filmmakers like Sergio Leone, Clint Eastwood, and Sam Peckinpah. I think the use of widescreen allow them to open up a wider canvas of what can be done to fill the frame. There's even moments in the films of John Ford that I've seen that has that depth of field. There's also a sense of honor that is there which seems to lack in today's westerns.

Some are saying The Lone Ranger killed the western. Bullshit. It's not even true western. It's just a bloated, misguided movie that went on for too long and lacks any substance while Johnny Depp just acts weird again.