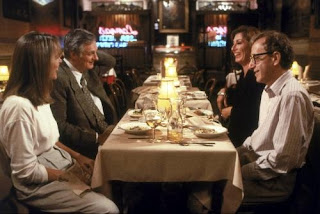 Directed and starring Woody Allen and screenplay by Allen and Marshall Brickman, Manhattan Murder Mystery is the story about a couple who find themselves involved in a murder mystery as they take part in the investigation finding what’s going on. The film a whodunit where a couple goes into the world of mystery as it marks a reunion between Allen and two of his great collaborators in co-writer Marshall Brickman and Diane Keaton who plays Allen’s wife in the film. Also starring Alan Alda and Anjelica Huston. Manhattan Murder Mystery is a fantastic suspense-comedy from Woody Allen.

The film revolves around a couple who learn that the wife of their new neighbor has died as they suspect something isn’t right. Carol (Diane Keaton) investigates what happens despite her husband Larry (Woody Allen) telling her not to. With the help of their friend Ted (Alan Alda), Carol goes further to find out what happened as she is convinced is a murder. Larry eventually helps out as he and Carol make some discoveries of their own while realizing that the killer is on to them. Turning to Larry’s author friend Marcia (Anjelica Huston) for help, Larry and Carol along with some friends decide to nab a trap in order to expose the truth. It’s a premise that is quite simple yet told in a pretty humorous manner where a couple play detectives to see whether or not their neighbor killed his wife.

The screenplay that Woody Allen and Marshall Brickman create is full of ideas that play in the world of mystery as it is driven by this couple who have been married for a long time but have lost a bit of excitement. Upon the news of this woman’s death and her husband’s behavior in its aftermath, the two become suspicious where Carol goes head on into see what is going on. Little by little, clues would emerge as they go into many revelations as Carol gets help from Ted who is a mystery buff as he would inspire Larry to get more involved. There are moments in the film where the suspense is quite intense while it allows time for Ted and Carol to deal with themselves. Eventually, the intensity of the suspense would allow the two to rely on each while calling on Ted for help as they also bring in Marcia who knows a lot about mystery as she would play a key role in the third act.

Allen’s direction is quite engaging as it is mostly straightforward where it is set entirely in Manhattan where he makes it a character in the film as there’s scenes shot at Madison Square Garden and at the Metropolitan Opera House. Still, there’s moments in the direction where Allen does play up into that approach of suspense-comedy where there’s bits of slapstick but also some very mesmerizing scenes involving intrigue. Many of the compositions Allen create are quite lively while he creates a climax that is truly thrilling as well as making it a tribute to Orson Welles’ The Lady from Shanghai as the film is also played in that climatic sequence. Overall, Allen creates a very entertaining and witty suspense-comedy that allows the audience to be engrossed in the mystery.

Cinematographer Carlo Di Palma does excellent work with the cinematography from the look of some of the nighttime exteriors scenes in the city to its daytime interior and exterior scenes. Editor Susan E. Morse does amazing work with the editing as most of it is straightforward with the exception of some montages that play into Marcia‘s theories over what might‘ve happened and such. Production designer Santo Loquasto, with set decorator Susan Bode and art director Speed Hopkins, does wonderful work with the set pieces from the look of the apartments that the characters live in to the theater house where Ted and Carol snoop at.

Costume designer Jeffrey Kurland does nice work with the costumes as it‘s mostly straightforward for the men though the clothes that Carol and Marcia wear are quite fun to look as it displays their different personalities. Sound editor Robert Hein does superb work with the sound from the intimacy in the locations to a very inspiring scene in the film’s third act to play a trick on the killer. The film’s soundtrack is terrific as it features an array of music from Cole Porter, Richard Wagner, Dave Brubeck Quartet, and Benny Goodman to play up some of the humor and suspense.

The casting by Juliet Taylor is fantastic for the ensemble that is created as it features some notable small appearances from Aida Turturro as a hotel clerk, Wendell Pierce as a policeman, and Zach Braff in his film debut as Larry and Carol’s son Nick. Other small roles include Melanie Norris as a young actress named Helen, Marge Redmond as a woman named Mrs. Dalton, Ron Rifkin and Joy Behar as friends of Carol and Larry, Lynn Cohen as the neighbor’s wife who dies early in the film, and Jerry Adler as the mysterious neighbor Paul House. Anjelica Huston is great as the novelist Marcia Fox as a woman who is a friend of Larry as she helps out Larry, Carol, and Ted to uncover the mystery while providing some theories. Alan Alda is brilliant as Ted as a mystery buff who helps Carol in uncovering things while becoming attracted to Marcia over her theories.

Finally, there’s the duo of Woody Allen and Diane Keaton in remarkable performances as Larry and Carol Lipkin. With Allen playing his usual nebbish persona and Keaton as the more outgoing of the two, the two clearly have not lost a step in their rapport with one another. Notably as Allen would provide some of the slapstick with Keaton as the more serious providing this unique balance as they are definitely the highlight of the film.

Manhattan Murder Mystery is a marvelous film from Woody Allen with superb performances from Allen, Diane Keaton, Alan Alda, and Anjelica Huston. The film is definitely one of Allen’s finest as well as another top-notch collaboration between Allen, Keaton, and co-screenwriter Marshall Brickman. It’s a film definitely has great odes to mystery as well as providing elements that are full of laughs. In the end, Manhattan Murder Mystery is a wonderful film from Woody Allen.

Good review man. I haven't seen this flick in quite some time, but I remember it being enjoyable and fun enough to recommend to others. Also, nice to see Zach Braff play Woody Allen's kid, at such a young age. Hell, I'd like to see him take a role like that nowadays if he was up to it and wasn't trying to get people's money for his movies. But I digress.

@Fisti-Nice. I think it deserves some accolades for not just the performances of Diane Keaton and Anjelica Huston but also for its screenplay.

@Dan O.-Well there is a reason why Zach Braff is going to us for money. If he got it from some other investor, that person would tell him what they want and such. It is a very fun film.

This is a movie I love watching a lot Its a perfect movie for a sick day. I love Allen and Keaton and wish they would do another movie together(Even a small cameo would be nice) I heard that this story was originally going to be used in "Annie Hall" as a sub plot but it got removed.

@TheVern-I too would love to see Woody and Diane Keaton do one more film. I did mention that the story was meant to be a subplot to Annie Hall in my recent Auteurs section on Allen's post-Farrow period.