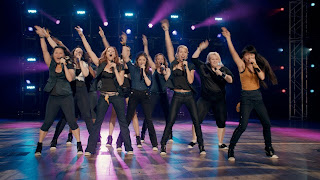 Based on the non-fiction novel Pitch Perfect: The Quest for Collegiate A Cappella Glory, Pitch Perfect is the story of a college freshman who joins an all-girl a cappella group to compete against a rival all-male group from the same school for an a cappella singing competition. Directed by Jason Moore and screenplay by Kay Cannon, the film explores the world of singing competitions and the dynamics of a group as a young woman tries to bring something fresh to her team. Starring Anna Kendrick, Skylar Astin, Rebel Wilson, Anna Camp, Brittany Snow, Alexis Knapp, Adam DeVine, Ben Platt, John Michael Higgins, and Elizabeth Banks. Pitch Perfect is an exciting and entertaining film about singing and having fun.

The film revolves around an all-female a cappella singing group known as the Bellas where it’s a new season as its leader Aubrey Posen (Anna Camp) is seeking to redeem herself after a humiliating incident she caused at the national collegiate finals. Joining the Bellas is a music-loving freshman named Beca Mitchell (Anna Kendrick) who reluctantly takes part in the group to appease her father (John Benjamin Hickey) as she learns about the world of a cappella singing competition where it’s quite brutal at times. Notably as the more traditional Aubrey and the rebellious Beca butt heads a bit about what to sing in order to win where the two eventually find a way to beat their rivals in the Treblemakers led by the egotistical Bumper Allen (Adam DeVine).

Kay Cannon’s screenplay doesn’t just explore the politics and the rules of what it takes to be a powerful a cappella singing group but also how fierce the competition can be. Though Beca is an outsider of sorts who listens to all sorts of music and creates her own vocal mixes from her laptop as she aspires to become a DJ. She takes part of the group because of her college professor father who makes a deal with her to take part in something for a year and if it doesn’t work out, he can send her to Los Angeles to become a DJ. Though the Bellas are this very talented singing group that sings mostly pop songs, their act is unfortunately a bit tiresome as they sing to an indifferent audience as its leader Aubrey has a hard time trying to get everyone to stick to the game plan.

Especially as the new version of the Bellas consists of an eccentric group of characters like the comedic Tasmania student Fat Amy (Rebel Wilson), the lesbian Cynthia-Rose Adams (Ester Dean), the very sexual Stacie (Alexis Knapp), and the very quiet yet strange Lily (Hana Mae Lee). While there are elements of the script that is quite formulaic in terms of its plot where it does climax with the Bellas and the Treblemakers facing off again in the finals. The script allows the audience to want to root for the Bellas and the obstacles they face though the Treblemakers are actually a singing group that do have respect for the Bellas despite their leader Bumper who is very full of himself. Particularly as Beca is sort of falling one of the Treblemakers in a freshman named Jesse (Skylar Astin).

Jason Moore’s direction is quite straightforward in terms of compositions and such while he does infuse a lot of energy into the musical performances and rehearsals. Notably the audition sequence where he creates a lot of moments to reveal many new characters as they’re singing Kelly Clarkson’s Since You’ve Been Gone in a very creative montage. The direction also gets the chance to let scenes play out while reveling into the characters as Moore gives them the time to develop in terms of the drama and comedy that’s happening. In the musical performances, Moore keeps things simple and natural to create something that is happening while using some of the performances to help tell the story including the tension between Aubrey and Beca. The comedy also has a sense of looseness where it has moments of improvisation but also doesn’t deter from the story. Overall, Moore creates a very funny and engaging film about singing and being part of a group.

Cinematographer Julio Macat does excellent work with the cinematography to give the film a very naturalistic look for many of its daytime exterior scenes while using more stylish lighting schemes for the concert scenes. Editor Zach Chemberlene does amazing work with the editing in creating montages and rhythmic cuts to play out some of the training sessions and auditions. Production designer Barry Robison, with set decorator David Hack and art director Jeremy Woolsey, does nice work with the set pieces from the stages where the singers perform to the look of the college campuses.

Costume designer Salvador Perez Jr. does terrific work with the costumes from the more casual look of the Treblemakers to the more refined look of the Bellas in their stage performances. Sound editors Sean McCormack and Erin Oakley do brilliant work with the sound editing to capture the intimacy of the singing as well as some of the comedic moments in the film. The film’s music by Christoph Beck and Mark Kilian is quite good as it‘s mostly alternative-rock based while music supervisors Sarah Webster and Angela Leus do fantastic work with the film’s soundtrack as it consists a wide range of music styles from pop, hip-hop, R&B, and rock while many of the actors in the film do their actual singing which helps elevate the music as a major highlight of the film.

The casting by Kerry Barden and Paul Schnee is marvelous for the ensemble that is assembled as it features some appearances from Christopher Mintz-Plasse as an audition launcher, Donald Faison, Har Mar Superstar, and Joe Lo Truglio as a singing group, Freddie Stroma as a college radio deejay whom Beca and Jesse intern for, Jinhee Joung as Beca’s very chilly roommate, and John Benjamin Hickey as Beca’s college professor father who insists that Beca takes part in a group just so she can have a good college experience. John Michael Higgins and Elizabeth Banks are excellent as singing competition commentators John Smith and Gail Abernathy-McKadden, respectively, as both of them bring some very funny comments to the singing. Utkarsh Ambudkar and Ben Platt are terrific as the Treblemakers vocalist/beat boxer Donald and Jesse’s nerdy/illusionist roommate Benji as the latter is a big fan of the Treblemakers.

Adam DeVine is brilliant as the Treblemakers leader Bumper as a guy who is so full of himself and loves to win while being a jerk to everyone as even his own teammates don’t like him very much. Hana Me Lee is fantastic as the strange yet very quite Lily as she someone who speaks so quietly that she’s barely audible yet is revealed to be a gifted beat-boxer. Ester Dean is wonderful as the soulful lesbian Cynthia-Rose while Alexis Knapp is superb as the very sexual and energetic Stacie. Brittany Snow is amazing as the very kind Bella vocalist Chloe who tries to get Aubrey to do something new while convincing Beca to join the Bellas. Rebel Wilson is very funny as the comedic Fat Amy as someone who is a very talented vocalist who brings excitement to the Bellas. Skylar Astin is stellar as Jesse as a talented singer who befriends Beca as he tries to show her films as well as being the guy in the Treblemakers that can ground them.

Anna Camp is a delight as the Bellas’ leader Aubrey as a woman trying to redeem herself following an embarrassing incident as she wants to win but is unable to take risks that would help her group. Finally, there’s Anna Kendrick in a remarkable performance as Beca as an aspiring musician/DJ who reluctantly takes part in the Bellas due to her singing ability as she also wants to do something that can help them as a group.

Pitch Perfect is an extraordinary film from Jason Moore that features a wonderful leading performance from Anna Kendrick. Along with a great supporting cast as well as an amazing soundtrack. It’s a film that plays into the love of music as well as being part of a group that allows someone to have fun as it is also quite funny. In the end, Pitch Perfect is a superb film from Jason Moore.

Good review Steve. I liked the flick, even if I do feel like it's way of being a comedy was a tad strange because not only did it get offensive at times, but a bit raunchy as well. I don't know, something wasn't mixing too well in the comedy-aspect of the movie, but I still enjoyed myself nonetheless.

I had fun watching this film as I also liked some of the comedy. Notably that scene where Fat Amy got hit with a burrito or the opening scene of Aubrey puking.

@Ryan McNeil-Yeah... and in the process, lose gas and sing a lame Smiley Virus song.

Still, that was funny though I'm aware of your dislike towards this film.

I soooooo love this movie & especially the pitch perfect songs! Old and new songs with a twist on their renditions. Totally aca-awesome! :) Utkarsh is my crush <3

@Meow Opre-It's a fun film. My favorite character is the very quiet Asian girl who says some very funny shit.