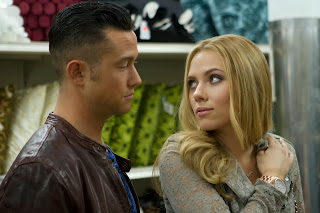 Written, directed, and starring Joseph Gordon-Levitt, Don Jon is the story of a modern-day Don Juan who falls in love with a beautiful woman until she discovers about his addiction to pornography. The film explores a young man dealing with his addiction as well as view on women. Also starring Scarlett Johansson, Tony Danza, Glenne Headly, Brie Larson, Rob Brown, and Julianne Moore. Don Jon is a witty yet fun film from Joseph Gordon-Levitt.

The film is really a look into the life of a young man named Jon “Don Jon” Martello Jr. (Joseph Gordon-Levitt) who is this very easy-going Italian-American living in New Jersey that lives a good life while being addicted to pornography. Upon meeting this beautiful woman Barbara (Scarlett Johansson), he thinks about having a real relationship with her while she gets him to try and improve himself by having him go to night classes where he meets an older woman named Esther (Julianne Moore). Barbara’s discovery about Jon’s addiction to porno has her repulsed where Esther also discovers about Jon’s addiction where she questions him about his views on women, sex, and love. Even where Jon wouldn’t just question about how he has sex with women but also what Barbara expect from him.

Joseph Gordon-Levitt’s script has this exploration about not just the way men view women from a sexual point of view but also what some women want in men. Notably as Barbara is this spoiled woman from New Jersey who loves bad romantic-comedies that she forces Jon to watch as she thinks these films represent the ideas of what love is. Even as Jon takes her to meet his family where it reinforces the idea of Jon finally settling down and having a family but he’s not sure if he wants that until his meetings with Esther has him realizing a lot about himself. The script doesn’t just succeed in fleshing out the many characters in the film but also play into the way women are presented to men as there’s a scene where Jon and his father (Tony Danza) watch a Carl Jr.’s commercial where a woman in a bikini is eating a fish sandwich as they’re entranced by the woman. It’s all told in a very funny manner as well as the way romantic-comedies are portrayed where it’s very obvious at how false they are where Gordon-Levitt pokes fun at the fallacy of the genre.

The first half is mostly a light-hearted comedy while the rom-coms that he and Barbara watch has the same kind of visual blandness that is expected in these films as well as the situations that goes on. The second half is a bit more dramatic in terms of Jon’s time with Esther yet it would be crucial to Jon’s growth as a man. Notably as Gordon-Levitt creates some unique compositions to play out the drama that would showcase Jon’s acceptance about what love is as well as what to expect from the people closest to him. Overall, Gordon-Levitt creates a very fascinating yet humorous film about a man’s addiction to pornography.

Cinematographer Thomas Kloss does excellent work with the film‘s cinematography from the nighttime locations of the places in New Jersey to the look of the clubs that Jon and his friends go to. Editor Lauren Zuckerman does amazing work with the editing in not just some of the inventive montages of Jon‘s daily routines but also in the way it plays to his own attempt to gain control for himself. Production designer Meghan C. Rogers, with set decorator Cindy Coburn and art director Elizabeth Cummings, does nice work with the set pieces from the look of Jon‘s apartment to the home where his family lives.

Costume designer Leah Katznelson does terrific work with the costumes from the clothes that Barbara wears to the stylish clothes that Jon would wear. Visual effects supervisor Karen E. Goulekas does some fine work with the film‘s minimal visual effects that involves one of the bad rom-coms that Barbara forces Jon to watch. Sound editor David Chrastka does superb work with the sound from the atmosphere of the clubs to the intimacy in the night classes that Jon and Esther go to. The film’s music by Nathan Johnson is wonderful for its array of folk-based and orchestral music to play up some of the humor while music supervisor John Houlihan brings a soundtrack that mostly consists of hip-hop and dance music including Marky Mark and the Funky Bunch.

The casting by Venus Kanani and Mary Vernieu is brilliant as it features some very funny cameo appearances from Anne Hathaway, Channing Tatum, Cuba Gooding Jr., and Meghan Good as the stars of the bad romantic comedies that Jon is forced to watch as well as Paul Ben-Victor as the voice of Jon’s local priest. Rob Brown and Jeremy Luke are terrific as Jon’s friends with the former as the more reserved Bobby and the latter as the dim-witted Danny. Brie Larson is wonderfully funny as Jon’s sister Monica who spends most of the film looking at her phone and texting where she only speaks in a key moment late in the film. Glenne Headly is amazing as Jon’s mother Angela who hopes for her son to meet a nice girl while Tony Danza is hilarious as Jon’s father who is kind of a sexist schmoe who likes to watch football games.

Julianne Moore is great as Esther as this older woman that Jon meets in night classes who questions him about his fascination with sex and pornography while she’s hiding some things of her own where Moore brings a very relaxed yet witty performance as a woman who would guide Jon to find something more. Scarlett Johansson is fantastic as Barbara as this very sexy yet vapid woman who spends half her time chewing gum and teasing Jon to get her way while proving herself to be just as shallow as he is. Finally, there’s Joseph Gordon-Levitt as the titular character where he brings in this very suave yet smug Italian-American persona that is full of himself. Gordon-Levitt not only makes the character funny but also endearing as someone who appreciates the finer things in life but also someone with a problem as he is forced to come to terms with who he is where Gordon-Levitt has some great scenes with Johansson and Moore to present the depth of his character making it one of his best performances.

Very interested to hear how much you liked it, since I've been hearing decidedly mixed results ever since its TIFF premiere.

I might have to wait a bit to give this a look, but at the very least, you have sparked my curiosity.

Thank you. It's a film that isn't trying to be thought-provoking as it's also quite funny in the way the sexes view each other and what they want. Especially since it's about young people and their views of sex when we all know there's so much more.

Awesome review! I saw a clip from the film when Scarlett came to Fallon's show to promote it and it looks like a very refreshing, fun role for her. Definitely going to see this one when I have a chance.

@Sati-She's awesome in this film and very funny. It's a role that I don't think a lot of women could pull off. It's not just that she uses her physicality to play that role but also bring that sense of humor in that character that teeters from being funny but also bitchy.

I'm thinking of doing a list of her best performances for her b-day in November.