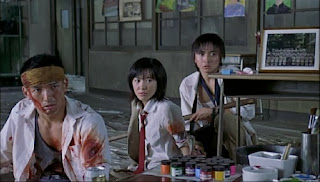 Based on the magna novel by Koushun Takami, Battle Royale is the story of a middle school student who is sent by the government to take part in a deadly game against other students where they have to kill each other in order to win. Directed by Kinji Fukasaku and screenplay by Kenta Fukasaku, the film is an exploration into children who are forced to kill each other in order to survive as one boy is still dealing with the death of his own father. Starring Tatsuya Fujiwara, Aki Maeda, Taro Yamamoto, Masanobu Ando, Kou Shibasaki, Chiaki Kuriyama, and Takeshi Kitano. Battle Royale is a terrifying and visceral film from Kinji Fukasaku.

The film is a simple story in which 40 students from a middle school in Japan are forced to take part in a game of survival where there can only be one winner all under the control of the government following a period of dystopia. It’s a film that has a simple premise yet its presentation showcases a world in which children are forced to survive under the most horrific circumstances in a deserted island where they have to kill each other to survive. It’s a film that has elements of satire, drama, and nihilistic horror as it’s told largely from the perspective of a boy named Shuya Nanahara (Tatsuya Fujiwara) who is dealing with his father’s suicide as he and his classmates find themselves being forced to play this deadly game with two transfer students where one of them in Kuzuo Kiriyama (Masanobu Ando) is a total psychopath.

The screenplay by Kinji and Kenta Fukasaku explores this dystopian world where teenagers from middle schools have seem to have lost respect for their adult figures following economic and social turmoil while there’s a few that does have respect towards their elders. Most notably Nanahara and his classmate Noriko Nakagawa (Aki Maeda) as they’re two young teens who have always has some sense of respect towards adults as Nakagawa also has some respect for her teacher Kitano (Takeshi Kitano) despite the fact that he’s mocked and treated with disrespect by his students as he later becomes the announcer of the Battle Royale games. The use of minimal flashbacks and the sense of danger that occurs play into the minds of Nanahara and Nakagawa as the weapons they have prove to be worthless as they’re easy targets for everyone else.

With only a few supplies and a map of which places the participants cannot go to as they’re danger zones where the collars they wear will explode as it will kill them instantly. The game begins immediately where already, there are those who just couldn’t take the pressure of kill or being killed where they commit suicide or kill each other under intense pressure or through some misunderstanding. For Nanahara and Nakagawa, they have few allies as one of them in the transfer student Shogo Kawada (Taro Yamamoto) who has played the game before as he becomes the one person the two have to rely against the psychotic Kiriyama and the mentally-troubled classmate Mitsuko Souma (Kou Shibasaki) who kill with no remorse. While there’s a few others that try to find a way to survive the game and get out of the island, there is that sense of terror that they could all die at any moment.

Kinji Fukasaka’s direction is very mesmerizing in the way he presents a world that is cruel and unforgiving as it’s largely set in an island in Japan where they’re cut off from the rest of the world and are being watched by the government where the sole survivor is later presented to the world. Fukasaka’s direction features a lot of beautiful compositions of the landscape where it seems peaceful until it becomes this place where kids do whatever to survive and kill each other. Fukasaka’s use of flashbacks play into the world of a few characters in peaceful times including Nanahara who has reminders of the day his father committed suicide with a message that would later drive him to survive as he is also eager to protect Nakagawa from anything or anyone.

Fukasaka’s approach to the film’s violence is definitely confrontational where the scene where all the kids have to watch this very strange and surreal instructional video has the Kitano character reveal how sadistic things will be as two students are killed immediately before the games begin. It’s a moment where it’s a taste of things to come where the violence becomes far more brutal with gunfire, slashes, and all sorts of crazy things as some have no idea what to do. Even as the number of survivors dwindle where both Nanahara and Nakagawa realize that they have to grow up and do whatever to survive in order to break whatever rules the game has. Overall, Fukasaka creates a very captivating yet unsettling film about a children being pitted against each other in a sick violent game in a world that is falling apart.

Cinematographer Katsumi Yanagishima does amazing work with the film‘s cinematography to play into the low-key look of the film with its approach to lighting for the scenes at night while being more straightforward in the daytime interior and exterior scenes. Editor Hirohide Abe does excellent work with the editing with its use of rhythmic cuts, slow-motions, and such to play into its suspense and the intensity of the film‘s violence. Production designer Kyoko Heya does nice work with the minimal set pieces from the base where Kitano and the government track the kids to the abandoned places where some of the kids hide out. The sound work of Kunio Ando is terrific for the way it builds into the suspense as well as the chaos that plays out in the film‘s violence. The film’s music by Masamichi Amano is brilliant for its soaring orchestral score to play into the drama and suspense while its soundtrack also uses some classical pieces by Giuseppe Verdi, Johann Strauss, and Johann Sebastian Bach.

The film’s cast is phenomenal as there’s some notable standout performances from Minami as Kawada’s old girlfriend Keiko who died so he can survive while Chiaki Kuriyama is awesome as Chigusa who deals with a deranged classmate who has a crush on her. Sosuke Takaoka is terrific as Chigusa’s friend Sugimura who carries a GPS tracker to find whatever survivors are left. Takashi Tsukamoto is excellent as the hacker Mimura who tries to break into the system so that the collars can be disabled while Takayo Mimura is wonderful as Sugimara’s love interest Kotohiki who tries to hide from the violence. Kou Shibasaki is amazing as the very troubled Mitsuko who kills with no remorse as she goes after those she had been ostracized by as she just goes for blood. Masanobu Ando is fantastic as the silent psychopath Kiriyama who just kills for fun as he creates some of the most memorable kills in the film.

Taro Yamamoto is brilliant as Kawada as a transfer student who had played and survived the game before as he helps out Nanahara and Nakagawa in surviving the game. Takeshi Kitano is great as the teacher Kitano who watches over everyone in the game while having some strange fascination towards Nakagawa as he is also dealing with his own troubled personal life. Aki Meada is superb as Nakagawa as a young woman who tries to deal with the horror of her situation as she knows she is scared and such while trying to ground herself in dealing with reality. Finally, there’s Tatsuya Fujiwara in a marvelous performance as Nanahara as a young man still reeling from his father’s death as he has to watch those he know be killed as he tries to make sense of all of the violence that he encounters as he tries to protect Nakagawa at all cost.

Battle Royale is a balls-to-the-walls and terrifying film from Kinji Fukasaku. Armed with a great cast and themes about violence and society, it is a film that refuses to play it safe and unveil the dark world of humanity at its most nihilistic. Notably as its idea of kids killing kids is something that won’t be for everyone as far as the film’s violence is concerned. In the end, Battle Royale is an extremely fucked up yet tremendous film from Kinji Fukasaku.

Hi Steven! I'm curious to see this as people kept saying that Hunger Games was copying this. Seems like this one is a heck of a lot more brutal though, not sure if I could handle the sadistic nature of it, from what I've read anyway.

Well, I think The Hunger Games may have ripped off the idea of kids killing kids for a game but it's really tame compared to what Battle Royale presents as I watched the shortened and often preferred theatrical cut rather than the extended director's cut. Believe me, the violence in this film is absolutely extreme.

Saw it recently. I can appreciate that it’s an original idea(before Hunger Games) but in terms of personal preference I just don’t like to watch all that killing.
A good movie, you are right that it's unsettling, and won't be for everyone.

Great review! I loved this film. I can see where The Hunger Games may have gotten an idea or two from them, but I felt they were different enough. The violence in this was insane.

@Chris-The violence is quite extreme and while I had moments where I was enjoying the insanity of it. Some of it was just gruesome.

@Brittani-The difference between this film and The Hunger Games is in the fact that they're 2 very different stories where Battle Royale is more rooted in nihilism.

This was also one of my Blind Spots earlier this year, and I thought it was well-done and engaging. It had been on my to-see list for years, so it sounds like you were in a similar boat. It's definitely on the extreme side with the violence, though I was even expecting it be crazier based on what I'd heard.

@Dan-I had been hearing about for such a long time as I finally decided to see it. Man, it was fucked up yet enjoyable. The version I saw was the theatrical cut. I just went for the original instead of the extended cut.