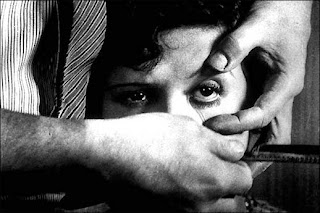 Directed by Luis Bunuel and written by Bunuel and Salvador Dali, Un Chien Andalou (An Andalusian Dog) is a 16-minute surrealist short film consisting of various images with no sense of plot. The result is one of the strangest yet exhilarating short films ever made.

The film has no story as it all plays to a series of surrealistic images that doesn’t make any sense nor does it do anything to tell a story or advance a plot. Then again, what Luis Bunuel and co-writer Salvador Dali present doesn’t matter as it is about surrealism and how things that people see isn’t sometimes what they seem. Images such as a man cutting a woman’s eyeball with a razor, a man dragging two pianos with two men under the piano, the appearance of Death’s face on a moth, or ants coming out a hole in a man’s hand. None of it seems to make any sense but Bunuel doesn’t seem to care about what it all means nor give any kind of explanation. It doesn’t really matter at all because what these images showcase is something that is far more fascinating than it actually is.

With the black-and-white cinematography of Albert Deburgen and Jimmy Berliet as well as Bunuel’s own stylish editing, the film has these very mesmerizing images that just play into a world where it is dream-like. It also adds this sense of unpredictability that requires a lot of attention where it forces the audience to maybe want to revisit the whole film or a certain scene to think what just happened. Through the music of Richard Wagner, Bunuel just uses Wagner’s music to play up the energy as well as some of the drama that occurs in the main performances of Simone Mareuil and Pierre Batcheff. Bunuel and Dali both make appearances as does Fanno Messan as this androgynous woman who appears in a street poking at a severed hand. All of it just adds to that sense of surrealism where it might be real or it might not be. Yet, the overall result is a truly magnificent piece of art from Luis Bunuel.

Un Chien Andalou is an outstanding short film from Luis Bunuel. The film isn’t just one of the most definitive short films ever made but also the idea of what film can do and be when there is no need for plot or any idea of conventional storytelling. Notably as it also showcases the period of surrealism that Bunuel and co-writer Salvador Dali created to showcase a world where nothing makes sense at all and it call be a dream or something else. In the end, Un Chien Andalou is a stunning yet unforgettable short film from Luis Bunuel.

I love this short film, so unique, so imaginative. It has aged well.

It still has that sense of shock which I think has helped the film become so memorable. So brilliant that I decided to just find a copy of the film online and download the thing. I wanna see it again. It's so fucking good.

I've seen the image you used above many times but I never knew where it came from. Now you've solved that puzzle for me Steven :D

@ruth-You're welcome. You need to see it. It's one of the most essential films... ever.

One of my favorite shorts. So powerful and odd. Really opened the door for what film could be.

@Alex Withrow-Once it was on TCM, I knew I had to see it. Even as I was planning my own little horror marathon as it was a perfect choice for that film to be included. Man, it was so good. I knew I needed to have the short in my my external hard drive in case I want to see it again. Bunuel and Dali rule!

A groundbreaking film that was influential even in music. I discovered it many years ago from the Pixies song Debaser.

@Bonjour-I first heard about it through David Bowie who used the film to open his show during the Station to Station tour of 1976.