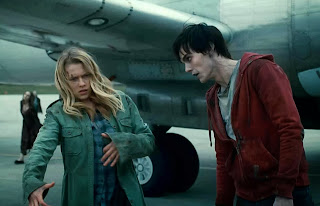 Based on the novel by Isaac Marion, Warm Bodies is the story of a zombie who falls in love with the daughter of a zombie-resistance leader as he starts to regain semblance of humanity. Written for the screen and directed by Jonathan Levine, the film is a genre-bending film that takes place during a zombie apocalypse where it’s a mixture of the zombie-thriller meets the romantic-comedy. Starring Nicholas Hoult, Teresa Palmer, Rob Corddry, Dave Franco, Analeigh Tipton, and John Malkovich. Warm Bodies is an extraordinary yet witty film from Jonathan Levine.

The film is set during a zombie apocalypse in which humans are fighting against zombies and skeleton-like creatures called boneys who are hungry for human flesh. Yet, it is a story about one particular zombie whose encounter with the daughter of zombie-resistance leader not only has him falling for her but also regain aspects of his humanity. It’s a strange premise for a film the bends various genres yet manages to work as it’s largely told from the perspective of this zombie named R (Nicholas Hoult) who often narrates the film as he deals with his life as a zombie as he also collects things including vinyl records and such. Notably as R reveals a lot of his own feelings and confusion about being a zombie as he is hungry for human flesh and brains where an encounter with a young resistance group has him eating the brains of someone where he sees memories and such that also features the young woman he captures in Julie (Teresa Palmer) whom he falls for.

Jonathan Levine’s screenplay does have a conventional structure that plays into R and Julie’s eventual romance though it takes its time to build that up where Julie is immediately frightened and confused by R and his kind actions. Especially for the fact that he killed and ate the brains of her boyfriend Perry (Dave Franco) where R sees Perry’s memories to know a lot about Julie as she’s the daughter of resistance leader Colonel Grigio (John Malkovich). With Julie staying at an airplane where R lives, she realizes that R is acting human as he starts to say words as it would rub off on the other zombies including his friend M (Rob Corddry). Yet, the zombies’ reintroduction with their humanity causes a conflict with the more-deadly boneys who not only feed on human flesh but anything that has a beating heart. Levine’s script uses R’s voice-over narration to express his feelings as well as his fascination to humanity where he also reveal the sense of loss that Julie had faced in her life as he becomes confused on whether to remain a zombie or to become human again.

Levine’s direction is pretty straightforward for the most part while he also adds some style into the film. Notably as he maintains some different looks to play into the different world of the zombies and human where the zombie world is a bit discolored whereas the human world and the dream sequences have more color. Levine’s use of close-ups, medium shots, and wide shots does manage to help create some unique images as well as play into the developing relationship between R and Julie. Levine does stick to convention as far as the action is concerned while not straying too far into fast-paced cutting for the action while infusing it with bits of humor in the story. Notably the early scenes of R and M grunting to each other as they’re having a zombie conversation as well as a scene where R goes into the human world and Julie’s home that includes a funny homage to a great romantic comedy. Overall, Levine creates a very stylish yet enjoyable genre-bending film about a zombie who falls for a human girl and regains his humanity.

Cinematographer Javier Aguirresarobe does amazing work with the film‘s very stylish cinematography by infusing a mostly discolored look for the scenes set in the airport and most of the locations in Montreal to the more colorful dream sequences that R experiences as well as the scenes involving the humans. Editor Nancy Richardson does excellent work with the editing as it‘s very stylized to play with some of action scenes involving the zombies, boneys, and humans as well as a few montages to play into R and Julie‘s developing romance. Production designer Martin Whist, along with set decorator Suzanne Cloutier and supervising art director Gilles Aird, does superb work with the set pieces from the decayed look of the airport as well as the look of the buildings where there‘s little technology and some places are abandoned. Costume designer George L. Little does nice work with the costumes from the red hoodie that R wears to the flannel shirt that Julie wears as it‘s mostly casual.

Special effects makeup designer Dave Elsey does brilliant work with the makeup design in the way the zombies look. Visual effects supervisor Dan Schrecker does fantastic work with some of the visual effects for the shots inside the bodies of the zombies as they regain their humanity as well as the look of the boneys. Sound editor Martyn Zub does terrific work with the sound from the way gunfire sounds to the growl of the boneys and the locations the characters encounter. The film’s music by Marco Beltrami and Buck Sanders is wonderful for its mixture of folk, rock, and orchestral music to play up the action as well as the romance while music supervisor Alexandra Patsavas create a superb collection of music that includes pieces by John Waite, Jimmy Cliff, the National, Guns N’ Roses, Bob Dylan, Bruce Springsteen, Feist, Bon Iver, the Scorpions, Roy Orbison, and M83.

The casting by Joanna Colbert and Richard Mento is incredible as it features some noteworthy small performances from Cory Hardrict as a subordinate of Colonel Grigio and Dave Franco as Julie’s unfortunate boyfriend Perry who starts to act more like Julie’s father. Analeigh Tipton is wonderful as Julie’s friend Nora who survives the zombie raid while trying to figure out R’s growing transformation into becoming human as she brings some humor to the film. Rob Corddry is excellent as R’s friend M as a zombie who also regains his humanity as he helps lead a group of zombies to deal with the boneys as Corddry also brings in some humor to the film. John Malkovich is superb as Colonel Grigio who is hell-bent on killing zombies after losing his wife to the apocalypse while trying to protect his daughter as it’s Malkovich being a badass but also being funny.

Finally, there’s the performances of Nicholas Hoult and Teresa Palmer as both of them do amazing work in their respective roles as R and Julie. Palmer brings a quality that allows her character to be engaging as well as funny as this young woman who is fascinated by this zombie she meets while dealing with the fact that he is becoming human again. Hoult is great as this young zombie who laments over his being while suddenly becoming human again as he brings the hope that the human-zombie war might come to an end. Hoult and Palmer have some wonderful chemistry together in the way they interact as well as being their for each other as they’re the highlight of the film.

Warm Bodies is a sensational film from Jonathan Levine that features winning performances from Nicholas Hoult and Teresa Palmer. The film isn’t just a creative genre-bender that is funny, romantic, exciting, and full of some cool action scenes. It’s also a film that takes the zombie film and infuse it with some heart where even zombies have feelings to. In the end, Warm Bodies is a marvelous film from Jonathan Levine.

I enjoyed this movie far more than I thought I was going to. I figured it was some quick knockoff of Twilight with zombies, but it was a really funny comedy. The first ten minutes or so of his inner monologue completely won me over.

And I also loved the whole twisted take on the "Romeo and Juliet" story - complete with balcony scene.

I caught this on TV as I wasn't sure what was going to happen yet it also won me over. It was pretty funny and I liked its take on Shakespeare. It's a better film than I expected it to be.

It was sweet, it was funny, and it was surprisingly able to make me believe in this relationship between the two. For me, that's worth recommending, especially for a rom-com. Good review Steve.

I quite enjoyed this one Steven, though it's not as groundbreaking as ppl seem to make it to be. I was impressed w/ Palmer who kind of reminds me of Kristen Stewart a bit but she's far more expressive. Hoult is pretty good as well, he's more zombie-like in the awful Jack the Giant Slayer.

@Dan O.-It's got something for everyone. It's a love story in a zombie apocalypse that is funny and has some nice violence. What more could you ask?

@ruth-Palmer is way better than Kristen Stewart and funnier. Hoult is winning me over as I think he's got what it takes to be a leading man just as long as he finds the right projects.