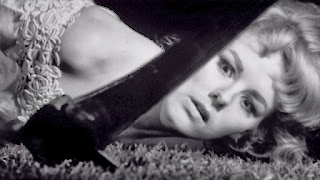 Written and directed by Francis Ford Coppola, Dementia 13 is the story about a woman who tries to put herself in her mother-in-law’s will after the death of her husband only to deal with an axe-wielding maniac. Produced by Roger Corman, the film marks Francis Ford Coppola’s first directorial feature in the form of a B-movie slasher film that features a lot of the attributes of horror. Starring William Campbell, Luana Anders, and Patrick Magee. Dementia 13 is a pretty good whodunit from Francis Ford Coppola.

The film is a simple whodunit in which a widow arrives to her late husband’s home in Ireland to attend an annual memorial service for her late sister-in-law that had died several years ago. Her intention to go to Ireland is to gain access to her mother-in-law’s will which she wants to be in where an axe-murderer is happening killing off many people as the family doctor Justin Caleb (Patrick Magee) investigates what is going on. It’s a simple premise that doesn’t have much plot as Francis Ford Coppola creates a story that has the typical schematics of a suspenseful-thriller. Yet, he also explores the dynamic of this family where one of them is getting married as everyone is a suspect into these mysterious murders. While there’s a playfulness in Coppola’s script, it is sometimes hampered by these elements where it doesn’t do enough to make the story more engaging than it should be.

Coppola’s direction is quite simple in terms of compositions and such while he is able to use the low-budget presentation to create some unique images. Notably in some montages and flashbacks to play into the idea that something isn’t right in these flashbacks. While Coppola does a good job in building up a lot of the suspense, some of it isn’t presented very well probably because of the low budget. One scene involves a minor character getting his head cut off and the presentation itself ends up being unintentionally hilarious. The cheese factor does still manage to keep the film interesting while its reveal of who the killer is does manage to pay off. Overall, Coppola creates a pretty decent and enjoyable whodunit.

Cinematographer Charles Hannawalt does nice work with the film‘s black-and-white photography where some of it looks grainy while does have some nice use of lights for the exterior scenes set at night. Editors Stuart O’Brien and Morton Tubor do terrific work with the editing as it‘s stylized to play with its suspense as well as it‘s use of flashbacks and montages. Art director Al Locatelli and set decorator Eleanor Coppola do excellent work with the interior look of the Irish castle and the rooms the characters live in. The sound work of Joseph Gross and Liam Saurin is superb for the atmosphere it creates. The film’s music by Ronald Stein is brilliant for its use of orchestral music to play into its suspense as well as themes that help maintain that sense of horror.

The film’s cast is amazing as it features some notable small performances from Derry O’Donovan as the family maid, Karl Schnazer as a poacher who lurks nearby, Peter Read as John Haloran who dies early in the film, and Barbara Dowling as the late Kathleen Haloran who is only seen in the flashback scenes. Mary Mitchell is terrific as the young woman Kane who is marrying Richard Haloran as she becomes frightened by what is happening while Bart Patton is pretty good as the youngest member of the Haloran family in Billy as a young man who is still traumatized by his sister’s death.

Luana Anders is excellent as John’s wife Louise who arrives to Ireland to try to get herself in her mother-in-law’s will while Eithne Dunne is wonderful as Lady Haloran who is still mourning her late daughter. William Campbell is fantastic as Richard Haloran as a man disturbed by what’s happening as he becomes a major suspect. Finally, there’s Patrick Magee in a brilliant performance as Dr. Justin Caleb who tries to figure out what is happening while doing odd things in his investigation.

Dementia 13 is a terrific mainstream debut film from Francis Ford Coppola. Though it’s really more of a cheap knock-off of other slasher films of the times that features some of the cheesy elements of producer Roger Corman. It is still an interesting film to see where Coppola started and how he would evolve in the years too come. In the end, Dementia 13 is a worthwhile and fun film from Francis Ford Coppola.

I always learn something new from your post Steven! I had no idea this was Francis Ford Coppola's debut. Great review!

Technically, it is his debut film of sorts as he made 2 other features prior to that which were essentially these very low-budget B-nudie films for Roger Corman.

Good review. It's been a while since I've watched this. It might be time to re-visit this.

In regards to one scene in particular. It might also come off as bad because no one knew how to do it, regardless of budget. From everything I've read this is the first on-screen decapitation, at least in American cinema.

@Wendell Ottley-It did look bad and cheesy but hey, it was the early 60s. Not to mention that it came from Roger Corman. What could you do with such a low budget?