Lars and the Real Girl


Originally Written and Posted at Epinions.com on 6/22/08 w/ Additional Edits. 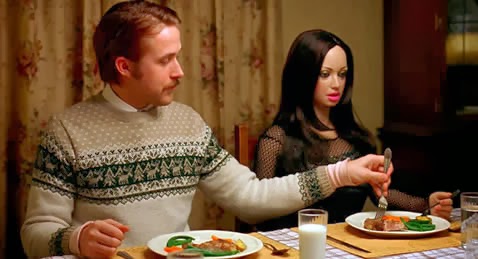 Directed by Craig Gillespie and written by Nancy Oliver, Lars & the Real Girl is the story of a shy man named Lars who is comes out of his introverted personality when he falls for a life-sized doll named Bianca. While his brother and sister-in-law worry about this strange behavior, they play along with him as Lars finds himself attracted to a co-worker as Lars is played by Ryan Gosling. Also starring Emily Mortimer, Paul Schneider, Kelli Garner, and Patricia Clarkson. Lars & the Real Girl is a sweet, charming, and quirky comedy-drama from Craig Gillespie.

Living in the garage near his late parents' home, Lars is a young man who keeps to himself. Shy and often very secretive, he rarely has contact with people as he goes to work and on Sundays, go to church. Yet, his sister-in-law Karin (Emily Mortimer) is concerned as she often invites him to dinner at his parents' home where Lars' older brother Gus (Paul Schneider) lives. Lars has caught the attention of a new co-worker named Margo (Kelli Garner) who often asks him if they would like to hang out but Lars politely refuses. Then one day, a co-worker shows Lars some sex dolls that he's looking at where Lars suddenly gets an idea. Six weeks later, a big package arrives for Lars as he walks up to Gus' home and asks if he can come for dinner with his new friend. Karin and Gus are excited until they see that Lars' new friend is a sex doll named Bianca.

Gus is convinced that his brother has lost his mind as Karin is trying to figure out how to deal with it. They all go to meet the town's doctor Dagmar (Patricia Clarkson) who suggests to Gus and Karin to play along with what Lars is doing and treat Bianca as if she's real. Karin gives in but Gus is extremely reluctant. Yet with Lars starting to become more communicative, Karin begins to treat Bianca like a real person with Gus still trying to deal with Lars' state of mind. With the town also reluctant to play along, they immediately take a liking to Bianca while Dagmar tries to explore Lars' psyche. Lars takes Bianca to a party as she meets Margo who also takes a liking to Bianca. With Gus now playing along, everyone takes a shine where things seem to go well though Gus and Karin still question whether it will help Lars' state of mind.

When Margo starts to date a co-worker, Lars begins to notice her as his relationship with Bianca starts to crumble due to her activity for the town. Lars gets a little upset as Karin reminds him that Bianca has his own life. When Margo asks Lars if he would like to go out somewhere, he does as he starts to notice her more. Yet, confused over his feelings for both Margo and Bianca, Lars suddenly finds himself in what he's really dealing with.

Thematically, the film is in some ways is about death. Yet, writer Nancy Oliver and director Craig Gillespie chose to cover up that theme a bit by exploring the unique character that is Lars. Essentially the film is a character study about a young man, still haunted over the death of his parents trying desperately not to connect with anyone until he decides to enter the real world through a sex doll. Nancy Oliver's script is filled with wondrous characters who seem to care for Lars while also presenting this unique world of small town Middle America where everyone seems to know everyone and interact with each other as a community. Yet, Oliver's script explores the fragile mind of Lars and how an object like Bianca can make him interact with people while breathing life into a character like Bianca.

Director Craig Gillespie does superb work in the film by creating funny moments in the film with such subtlety in the film's first act when Karin and Gus are introduced to Bianca. The way Gillespie presents their reaction is done with a lot of humor where the actors had to do so little. The second act is also wonderfully told as Gillespie explores the world of small town Middle America with Ontario as the location. For the third act, it does become a bit dramatic but Gillespie's direction and the actors wisely underplay it as Gillespie's restrained, subtle tone works for the film as an entirety. With the way Gillespie presents the scenes and compositions while letting other characters get an idea of what they think. The result is truly a marvelous film thanks to Craig Gillespie's heartfelt direction.

Cinematographer Adam Kimmel does an amazing job with the film's photography where Kimmel captures the wintery look of small town America with dabbles of color as the interior shots are wonderfully lit to capture an intimacy and tone for each scene. Kimmel's work is truly superb as his look is authentic and beautiful as it's one of the film's technical highlights. Editor Tatiana S. Riegel is excellent for its transitional cutting, use of fade-outs and its methodical yet smooth pacing as it carries the film with such ease through Gillespie's sensitive tone.

Production designer Arvinder Grewal and art director Joshu de Cartier do a fine job in the look of the homes of Karin and Gus as well as the place that Lars works and other locations. Costume designers Gerri Gillian and Kirston Leigh Mann do a wonderful job with the film's wintery look from the sweaters and shirts that Lars wear to the colorful clothing that the women including Bianca wears.

Sound editors Barney Carbal and Perry Robertson do a nice job in capturing the atmosphere of the film's interior scenes and outdoor exterior scenes to show the world of the small town that Lars lives in. Music composer David Torn create a wonderfully melodic, bouncy soundtrack for the film's quirky yet heartfelt vibe that features melodic chimes and uplifting string arrangements while the film's third act is more somber as Torn's music wonderfully under plays the film. The soundtrack consists of artists that are mostly unknown with the exception of the Talking Heads and its side project Tom Tom Club.

The casting by Richard Hicks and David Rubin is wonderful for its small but memorable performances from R.D. Reid as the local reverend, Nancy Beatty as Mrs. Gruner, Karen Robinson as Lars' co-worker Cindy, Maxwell McCabe-Lokos as another of Lars' co-worker Kurt who introduces him to the dolls, and Billy Parrott as Margo's boyfriend Erik. Patricia Clarkson is brilliant in her role as Dagmar, a doctor who tries to go into Lars psyche while sharing her own feelings of loneliness as she tries to help Lars cope through establishing a relationship with Bianca.

Kelli Garner is excellent in her role as the sweet, quirky Margo who has a crush on Lars while befriending Bianca as she becomes one of the few people who help Lars interact with the world. Paul Schneider is great as Lars' older brother Gus who is concerned for Lars' mental health while admitting to the guilt that it could be his fault as he tries to cope with his mistakes. Emily Mortimer is superb in her role as Karin, Lars' sister-in-law whose maternal concerns for Lars comes to the test when she deals with Bianca to help Lars overcome his introverted personality.

Then there's Ryan Gosling in an amazing and tender performance as Lars. Gosling's restrained, soft-spoken performance is definitely a testament to his talents where he can delve into a character whether it's someone extroverted or troubled. In the role of Lars, Gosling's subtlety and melancholic approach to the characters makes Lars as unique and likeable despite his own mental state. Yet, it's a great follow-up performance to the one Gosling gave in his Oscar-nominated performance in Half Nelson. The film's most surprising performance goes to the sex-doll named Bianca. The half-Danish, half-Brazilian doll with brunette hair is definitely a character full of life and wonder as she brings out the best in the actors she acts with.

The Region 1 DVD from MGM and 20th Century Fox presents the film in its 1:85:1 widescreen aspect ratio with 5.1 Dolby Surround Sound in English and Dolby Surround Sound in Spanish. Featuring English and Spanish subtitles, the DVD includes three special features. First is a brief, deleted scene where Lars in a bathtub with Bianca where the director, through text, reveals that the scene reveals Lars' struggle over his feelings for both Bianca and Margo. The 10-minute featurette entitled The Real Story of Lars & the Real Girl explores the film and its story featuring interviews with the cast and crew as Patricia Clarkson took the part because Ryan Gosling was going to be in whom she had admired. Gosling talks about his rehearsal approach where he actually spent time with the Bianca doll to understand his character.

The six-minute featurette A Real Leading Lady explores Bianca who is given more make-up than most of the cast as they talk about her while Gosling talks about a Walter Salles film she did only to get into an argument about their interview. It's a funny, sweet featurette that goes behind the character who steals the show including a couple of quotes from Richard Burton and Federico Fellini. Along with the film's theatrical trailer, the DVD also includes trailers for films like Music Within, Bonneville, Frank Oz's Death at a Funeral, Tamara Jenkins' The Savages, and the hit film from Jason Reitman, Juno.

Lars & the Real Girl is a sensitive, touching, and light-hearted film from Craig Gillespie featuring a superb performance from Ryan Gosling. Fans of Gosling will no doubt consider this film as essential featuring great supporting work from Emily Mortimer, Paul Schneider, Kelli Garner, Patricia Clarkson, and of course, Bianca. While the idea of a man falling in love with a love-doll might seem crazy, the film's light-hearted tone and themes makes this film into a gem worth watching. In the end, Lars & the Real Girl is a remarkable film from Craig Gillespie.

I'm as far away from being a fan of Ryan Gosling as you can get, but I'm still curious to see this one as I like Emily Mortimer. The story is bizarre but I can see how it has the potential to be poignant as well.

I think this is one of Ryan Gosling's finest performances as it showcased how sweet he can be while he has a great supporting cast to back him up.

I feel like all the praise Her is getting now should be going to this one since it kinda took this idea of loneliness and for me at least, sold it much better than HER, several years prior to Jonze's film. Gosling was amazing here, as was the always great Clarkson.

@Sati-While I think Her is the better film, I still think Lars and the Real Girl should get more exposure though both films are different but with similar ideas about loneliness.