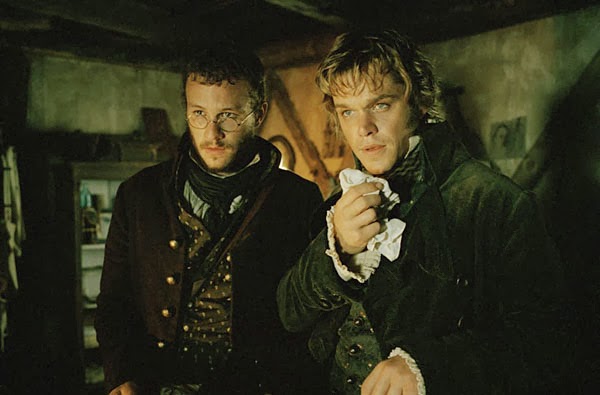 Directed by Terry Gilliam and written by Ehren Kruger with rewrites by Gilliam and Tony Grisoni, The Brothers Grimm is the story of how the two men who would create fairy tales when their work as con-artists have them encountering with a real-life fairy tale curse. The film is a fictional portrait of Wilhelm and Jakob Grimm with some exaggerations as they’re played respectively by Matt Damon and Heath Ledger. Also starring Lena Headey, Jonathan Pryce, Peter Stormare, and Monica Bellucci. The Brothers Grimm is an enjoyable yet messy film from Terry Gilliam.

Set in the early 19th Century in French-occupied Germany, the film is about the Brothers Grimm who are tasked to take on an ancient curse that has captured young girls in a small German town despite the fact that they’re really con-artists doing tricks for money. It’s a film that is largely fictional and exaggerated in how Wilhem and Jakob Grimm came up with the many stories that would be told for ages. Especially as it showcases these two different personalities with Wilhem being the more selfish and realistic of the brothers and Jakob as the more imaginative and helpful. Due to their antics, they reluctantly team up with the Italian torturer Mercurio Cavaldi (Peter Stormare) to deal with this curse as they also get help from the huntress Angelika (Lena Headey) whose sisters had also disappeared. Yet, what they deal with is something much more troubling as it relates to an ancient story about a queen (Monica Bellucci) whose beauty was ravaged by the plague as she seeks the blood of 12 girls to reclaim her beauty.

The film’s screenplay does have an interesting concept, along with references to the stories of the Brothers Grimm, but it’s often bogged down by lots of exposition about the ancient curse and all sorts of things that makes the story very messy. Especially in tone where it wants to be a fantasy film with humor and action but never finds a way to really mesh itself. Though it’s clear that Terry Gilliam and Tony Grisoni try to improve Ehren Kruger’s script by meshing these genres. The emphasis on exposition is a major flaw in the script though the characterization of the Brothers Grimm, Angelika, and Cavaldi do manage to make things work. Even as Cavaldi is an antagonist working for the French yet becomes fully aware that the forces that he, the Brothers Grimm, and Angelika are facing is much more troubling.

Gilliam’s direction is definitely lavish in terms of the set pieces that he creates as well as the sense of style in the compositions he creates. Notably as he manages to create some unique shots to play into the world of the Brothers Grimm as much of the production is set in the Czech Republic as 19th Century Germany. Many of the scenes that Gilliam creates is definitely playful and offbeat such as the torture room and castle that Cavaldi’s superior in General Vavarin Delatombe (Jonathan Pryce) lives in to the tower where the aging queen lives. Gilliam does infuse a lot of humor into the action along with some sequences that require some visual effects to play into that world of fantasy though not every moment with visual effects work. Still, there’s a messiness that occurs in the film as it plays to its climax where the Brothers Grimm face off against the queen which has some good moments but also some not-so-good moments. Overall, Gilliam creates a pretty enjoyable film despite some of the issues with its script and its emphasis on exposition.

Cinematographer Newton Thomas Sigel, with additional work from Nicola Percorini, does excellent work with the film‘s cinematography with its use of yellowish lighting for some of the film‘s exteriors with some blue for some scenes at night while putting on some displays of lighting for many of the film‘s interior scenes. Editor Lesley Walker does nice work with the editing where it does emphasize a lot on style with some rhythmic cutting for the film‘s action and humor as well as in its suspenseful moments. Production designer Guy Hendrix Dyas, with set decorator Judy Farr and supervising art director Keith Pain, does fantastic work with the set pieces from the look of the tower and castles as well as the village the Brothers Grimm go to. Costume designers Gabriella Pescucci and Carlo Poggioli do brilliant work with the costumes from the uniforms that Cavaldi and General Delatombe wears to the lavish dress the queen wears.

Makeup designer Christine Beveridge and hair designer Vera Mitchell do superb work with the makeup and hair design in the look of the queen as an aging crone to what she would look like in her prime. Visual effects supervisor Kent Houston does some good work with the visual effects from the look of the moving trees and other strange creatures though some of it is a bit wobbly at times. Sound editor Ian Wilson does terrific work with the sound to create some sound effects and such to play into the world of fantasy the characters encounter. The film’s music by Dario Marianelli is wonderful as it is largely orchestral in its playful arrangements with some moments of suspense as well as being more brass-based to play into the period of the times.

The casting by Irene Lamb is amazing as it features some notable small performances from Roger Ashton-Griffiths as a town mayor duped by the brothers, Mackenzie Crook and Richard Ridings as sidekicks of the brothers who aid them in their schemes, Tomas Hanak as Angelika’s father who told her the story about the queen, and Monica Bellucci in a terrific performance as the mysterious mirror queen. Jonathan Pryce is excellent as the very cruel General Delatombe who forces the Brothers Grimm to deal with the incident over disappearing girls or else he will have them executed. Peter Stormare is superb as Mercurio Cavaldi as a torturer who watches over the Brothers Grimm in their activities while realizing that something isn’t right as he also deals with General Delatombe’s cruelty towards him.

Lena Headey is brilliant as Angelika as a huntress who is considered a pariah in her village as she reluctantly helps out the Brothers Grimm as she wants to find her sisters who had disappeared while realizing that the story her father told is actually real. Finally, there’s Matt Damon and Heath Ledger in delightful performances in their respective roles as Wilhelm and Jakob Grimm where the two bring a lot of energy and determination to their role. Damon is the funnier of the two as he’s always got some funny things to say while being very bossy while Ledger is more reserved while yearning for some moment of fantasy as he’s constantly writing ideas that would become basis for the stories he and his brother would create. Damon and Ledger have great rapport together which does liven things up in the film as they’re major highlights of the film.

I caught up with The Brothers Grimm for a fantasy marathon a few years ago, and I admired its look and a few inspired sequences. I agree that it's very uneven overall and isn't sure what it wants to be. Gilliam introduces some of his humor and style, but it's also surprisingly convention. It ended up being interesting, but just okay on the whole. It sounds like you're in a similar camp.

Well, I think the reason the way the film is what it is was largely due to the fact that Gilliam never really got final cut with the film as he fought tooth-and-nail with the Weinsteins over the film. He and Tony Grisoni did a lot of work in re-writing the script which they didn't get credit as the production and post-production was a mess which isn't surprising when it concerns Gilliam. I'll talk about it more when I do my Auteurs piece on Gilliam in October.

*cries* I miss Heath Ledger. I'm in the same boat as you. It was very flawed, but I still enjoyed it for what it was. Gilliam is a very strange director. Great review!

It sounds like you liked this one more than I did. I was perhaps let down by a coworker praising this as the best film she had seen in a long time, which raised my expectations.

@Chip Lary-I wouldn't trust your co-worker at all. It's obvious she hadn't seen a lot of films by Terry Gilliam. I knew it was a mess but an enjoyable one though I think it will still be a better film if the Weinsteins hadn't interfered.