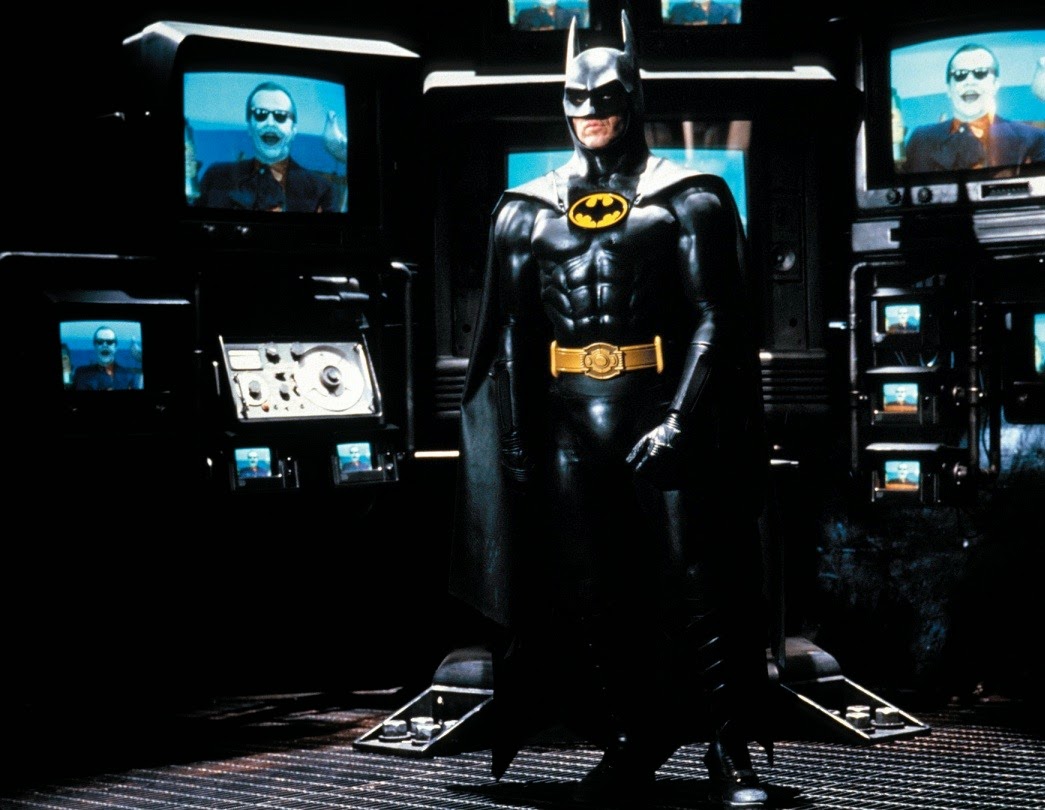 Based on the DC Comics by Bill Finger and Bob Kane, Batman is the story about a mysterious vigilante who battles corruption in Gotham City as he deals with a former mob enforcer who would become the Joker who is set to wreak havoc on the city. Directed by Tim Burton and screenplay by Sam Hamm and Warren Skaaren from a story by Hamm, the film is an origin-story of sorts of how Bruce Wayne deals with the loss of his parents in the hands of the man who would become the Joker while falling for a photojournalist. In the role of Wayne/Batman is Michael Keaton while playing the role of the Joker is Jack Nicholson. Also starring Kim Basinger, Robert Wuhl, Michael Gough, Pat Hingle, Tracey Walter, Billy Dee Williams, Jerry Hall, and Jack Palance. Batman is an adventurous yet stylish film from Tim Burton.

The film is about Bruce Wayne and his alter-ego in Batman as he tries to save Gotham from chaos as its bicentennial is approaching. In this role of a vigilante who isn’t accepted by the police, Batman would spread fears into the criminals as he would fight the mob where an encounter with the enforcer Jack Napier at a chemical plant would have some repercussions where Napier falls into a chemical waste as he would survive and become a more psychotic killer in the Joker. The Joker would wreak havoc on Gotham forcing Batman to try and stop him while Wayne would deal with the trauma over his parents death as he falls for the photojournalist Vicki Vale (Kim Basinger) who is helping a reporter in covering a story on Batman. It’s a film that isn’t a traditional origin-story but rather an interpretation into what drives Bruce Wayne into becoming Batman as well as coming to terms with his loss and the man who killed his parents when he was a kid.

The film’s screenplay does subvert a lot of the ideas of the origin story in order to make it a film in not just Jack Napier’s transformation as the Joker but also in how he would get Batman to emerge out of the shadows and save Gotham. When Wayne isn’t Batman, he acts as this reclusive and eccentric billionaire who is sort of aloof to the public including Vicki Vale and her journalist friend Alexander Knox (Robert Wuhl) as it’s just a cover for the fact that he is trying to stop corruption in the hands of mob boss Carl Grissom (Jack Palance). Yet, Grissom would try to kill Napier who had been having an affair with Grissom’s mistress as it would force Napier as the Joker to kill Grissom and take over all of the operations. Yet, the Joker just wants to create chaos and destroy the Batman so he can rule Gotham. This would force Wayne to not only step up against the Joker but also deal with the wounds and trauma so he can gain some peace.

Adding to the dramatic elements of the story is the presence of Vicki Vale as she helps Knox try to find the identity of Batman as she gets close to Bruce Wayne where she and Knox eventually learn about Wayne’s past and his parents death. She would eventually become an object of desire for the Joker who would try to woo her in the most insane ways as it adds to some of the film’s dark humor.

Tim Burton’s direction is very extravagant in some of the set pieces he creates from the Axis chemical plant to the city of Gotham itself as it becomes a playpen of sorts for him. With its emphasis on miniatures and other special effects, Burton creates a film that does have a look that is quite dark but also very offbeat. Much of the staging of the fights and action sequences that is shot at Pinewood Studios in England has Burton going for a world that definitely seems to have a bit of a comic-book look but also a bit of realism. The compositions that Burton creates for those scenes are vast and powerful as it includes the climatic showdown between Batman and the Joker as well as an earlier confrontation at a museum.

The dramatic and humorous scenes are also interesting in the way Burton maintains a certain intimacy in his direction. Especially in the latter as the humor is very dark yet somehow manages to be very funny. There’s an energy to those scenes while the dramatic moments including a flashback scene of the death of Wayne’s parents are quite eerie but also somber in how Wayne tries to cope with that loss. That balance of humor, adventure, drama and suspense somehow manages to create a film that doesn’t have all of the attributes of a great blockbuster film but also something more. Overall, Burton creates a film that does more than what it needed to be while also being a whole lot of fun to watch.

Cinematographer Roger Pratt does excellent work with the film‘s cinematography with its use of shadows and such for some of the film‘s interior scenes at night as well as the elaborate lighting schemes for the parade and some of the exterior settings in Gotham. Editor Ray Lovejoy does brilliant work with the editing with its approach to rhythms that allows each moment to shown while slowing things down in the more dramatic portions of the film. Production designer Anton Furst, with set decorator Peter Young and supervising art director Leslie Tomkins, does fantastic work with the set pieces from the look of Gotham City as well as the places such as Wayne Manor, the Axis Chemicals factory, and other places in Gotham while Keith Short does superb work in the design of the Batmobile.

Costume designers Bob Ringwood and Tony Dunsterville do terrific work with the design of the costumes from the suits of the Joker as well as the costume that Batman wears. Makeup designer Nick Dudman does wonderful work with the design of the makeup that the Joker wears. Visual effects supervisor Derek Meddings does nice work with some of the visual effects that includes some animation and miniatures in some of the designs of the places in Gotham. Sound editor Don Sharpe does some fine work with the sound to create some of the film’s sound effects as well as the chaos that goes on in Gotham. The film’s music by Danny Elfman is great for its bombastic orchestral theme to play into some of the adventure and drama that occurs in the film while the soundtrack features an album of original songs by Prince that plays into the film‘s humor as it‘s mixture of funk and soul music with a bit of rock adds a unique flavor to the film.

The casting by Marion Dougherty is incredible for the ensemble that is created as it features some notable small appearances from William Hootkins as the corrupt Lt. Eckhardt, Lee Wallace as Gotham’s Mayor Borg, Tracey Walter as Jack’s right-hand man, David Baxt and Sharon Holm as Bruce’s parents in the flashback scene, Charles Roskilly as the young Bruce Wayne, Hugo E. Blick as the young Jack Napier, and Jerry Hall as Carl Grissom’s mistress Alicia. Jack Palance is excellent as Jack’s boss Carl Grissom who tries to have Jack whacked only to deal with the more psychotic Joker. Billy Dee Williams is terrific as the new district attorney Harvey Dent while Pat Hingle is superb as Commissioner James Gordon. Alfred Gough is wonderful as the very resourceful Alfred Pennyworth who helps Bruce in all sorts of things. Robert Wuhl is brilliant as the reporter Alexander Knox as he says some funny things while being the guy trying to get Vale not to get too close.

Kim Basinger is pretty good as Vicki Vale as this determined photojournalist who falls for Bruce Wayne while becoming the unwilling object of affection of the Joker. Jack Nicholson is magnificent as Jack Napier/the Joker as a mob guy who likes to take care of business only to become this very strange psychotic who always has some funny things to say while being a complete psychopath as it’s definitely one of Nicholson’s best roles. Finally, there’s Michael Keaton in a marvelous performance as the titular character/Bruce Wayne as Keaton brings this very restrained performance that has this brooding quality to both personas as well as a bit of aloofness in his approach to Wayne while being the badass as Batman.

Batman is a remarkable film from Tim Burton that features outstanding performances from Michael Keaton and Jack Nicholson. Along with a strong supporting cast and great set designs, it’s a film that definitely serves as a standard-bearer for many superhero blockbuster films while it’s also a film that is very fun to watch. In the end, Batman is an incredible film from Tim Burton.

Very fun movie. Still one of the best Batman flicks ever made. Nice review.

Thanks. While I think the films that Christopher Nolan did are much better. This one is still a great superhero blockbuster film.

If I had to make a top 10 of films I think hold up to rewatching, this Batman film is among them. Like you say, it's just a lot of fun, and I love the look of Gotham.

@Chris-It is a fun film as I had a ball watching it. It was on TV and I just decided to watch it which is coincidental as I'm actually working on an essay on the entire Dark Knight trilogy which might come out or not depending on what I think of the finished product.

I always thought Michael Keaton was a fascinating choice as Bruce Wayne and is still my fave out of anyone who's played him. He brings an offbeat quality to the character that I like, esp. in the scene where Wayne tries to tell Vicki that he's Batman. It's almost like the scene is out of another movie or something and provides all kinds of insight into these two people and why they are drawn to each other.

@J.D. Lafrance-I think the reason Keaton stood out is because he wasn't playing Batman in a very conventional way as he knows how to be very brooding yet maintain this sense of anguish that he is trying to hide. Though I prefer Christian Bale, I think Keaton's performance is among the standards of how to play a superhero.