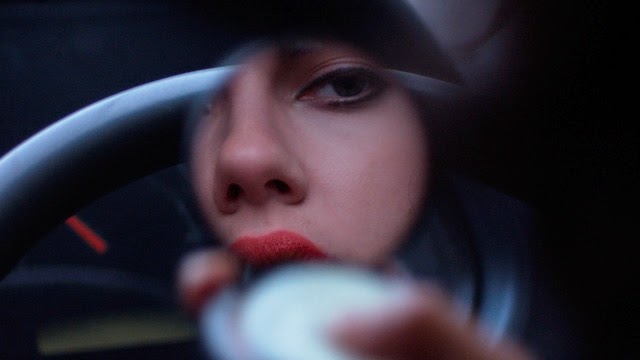 Based on the novel by Michel Faber, Under the Skin is the story of an alien who arrives to Earth taking in the form of a woman who preys on the men of Scotland as she begins to discover humanity in her journey. Directed by Jonathan Glazer and screenplay by Glazer and Walter Campbell, the film is an exploration of an alien who uses her sexuality to lure men for her own means as she deals with her new surroundings and the world she’s in. Starring Scarlett Johansson in the lead role as the alien. Under the Skin is a haunting yet audacious film from Jonathan Glazer.

It’s a film that explores what would it be like for an alien to land on Earth as its sole mission is to lure men into a trap by taking the form of a beautiful woman. Upon the journey of this alien as a woman, she treks around Glasgow and other nearby towns in Scotland to lure young men who are eager to have sex with her unaware of what she is and her intentions. That’s all that happens in much of the film’s first act as it’s second act has her encountering the actions of humanity through good and bad while beginning to act human. The film’s screenplay does play to a traditional narrative structure yet it is more concerned with the development of this alien as she becomes accustomed to her surroundings and the idea of humanity itself.

The second act has the alien encounter a disfigured man that would change not just her mission but everything she sees about herself and her work. Even as things like food and what humans do is foreign to her as well as looking into the mirror as a woman is also intriguing as it’s the alien discovering more about who she is. It all plays into that idea of an alien discovering humanity and what it means to be human as she knows that she is in trouble. The script doesn’t have a lot of dialogue as it’s more about an alien observing everything around her that includes parties, sex, and all sorts of things that baffles her.

Jonathan Glazer’s direction is very hypnotic not just for the imagery that is created but also in the way it allows the story to be told in a manner that is simple and to the point. Notably in the way the film opens as Glazer definitely aims for that sense of the unknown as the opening scene has these images that are very strange and intoxicating as if it is a sci-fi film that is about entering the unknown. Then the story starts to take shape where Glazer’s camera definitely aims for a cinema verite style of sorts in its tracking shots and other things as it makes Glasgow and other locations in Scotland be just as important to express the encounter with the unknown from the alien’s perspective. Some of the compositions that Glazer creates is intimate as some of it has the alien driving around in a van through Glasgow.

There’s also sequences that are very strange in the way the alien lures her captors as the mixture of image, sound design, and music play into that sense of terror that occurs. Even as Glazer would use close-ups to play into the alien’s development as she understands the meaning of humanity such as a scene where she’s at a restaurant about to eat human food for the first time. It’s a scene that could’ve been played for laughs but Glazer’s restrained approach to the image makes it much more engaging as the landscapes and fogs in Scotland add that sense of intrigue that the alien encounters. The images of the Scotland hills and lakes play into the alien’s curiosity as if she is in that world of the unknown where there is an element of suspense about who might capture her or what will happen to her if she is revealed to be an alien. Overall, Glazer crafts a very intoxicating yet unsettling film about an alien who encounters a new world that is very alien to her.

Cinematographer Daniel Landin does incredible work with the cinematography from the dream-like yet naturalistic look of the locations in Scotland as well as its use of low-lights and such for some of the film‘s interior scenes along with the sequence of the men being trapped. Editor Paul Watts does brilliant work with the editing from the opening montage scene of strange images to the usage of jump-cuts and dissolves to play into the wonderment of the alien as well as some of the suspenseful moments of the film. Production designer Chris Oddy, along with art directors Martin McNee and Emer O’Sullivan, does nice work with some of the set pieces such as the home the alien lives in along with her van yet the real standout of the art direction is the room where the alien lures her prey.

Costume designer Steven Noble does terrific work with the clothes that the alien wears as it plays to her beauty but also in the way she stands out among the people she encounters. Hair/makeup designer Christine Beveridge does wonderful work with the wig that the alien wears as well as the look of the deformed man that she meets that features the work of special makeup effects artist Andy Garner. Visual effects supervisors Tom Debenham and Dominic Parker do amazing work with some of the film‘s evocative visual effects in the sequence where the men who are lured by the alien go to as well as some other moments that are just eerie to watch.

Sound designer Johnnie Burn does fantastic work with the sound design as it has this sense of disconcerting layers of sound where the mixing and editing play into the alien trying to understand what she‘s hearing as a lot of it sounds confusing but also very engaging as it‘s one of the film‘s highlights. The film’s music by Mica Levi is remarkable for its unsettling yet ravishing score that is this mixture of ambient with brooding sound textures to play into the suspense and horror while music supervisors Jay James and Peter Raeburn bring in a mix of pop and electronic music that is played on location for the alien to discover.

The casting by Kahleen Crawford is excellent for the men she brings in as most of them are non-actors who were unaware that they’re being filmed as the real standouts in the film are Jeremy McWilliams as the fellow alien as well as the two men the alien encounters in the deformed man as well as a man who the alien meets as he takes her into his home. The star of the film is definitely Scarlett Johansson as her performance as the alien is truly one for the ages. It’s a role that has Johansson not only contain a sense of restraint in how she plays as this alien observing her surroundings but also the people she encounters as it’s one that has Johansson not saying much in the film. Whenever she is talking, it’s in a British accent as Johansson has that sense of darkness to her performance but also one of curiosity as she isn’t afraid to use her sensuality into her performance as she does go full-frontal but it’s where the nudity has something to say as her performance in the film is beyond sensational.

Under the Skin is an outstanding film from Jonathan Glazer that features a tour-de-force performance from Scarlett Johansson. While it’s definitely a film that will baffle audiences about the idea of an alien discovering Earth and humanity. It’s a film that definitely takes great risks into telling a story that doesn’t play by the rules while finding a way to see how an alien would react to her surroundings. In the end, Under the Skin is a magnificent film from Jonathan Glazer.

Having read the book, I'm very interested to see how this plays out on screen. Great review!

Can't wait to see this one, the trailer looks awesome! Happy you enjoyed it, sounds like it's really strong for atmosphere with the mix of score/visuals.

@Brittani-I actually heard that the film is different from the book yet it's worth seeking out not just for its visual but also its minimalist approach to storytelling.

@Chris-I downloaded the soundtrack a few days ago and it is very effective. Right now, if I was to make any Oscar considerations. I would nominate this film for Johansson's performance, its screenplay, editing, and sound design.

Wonderful review! I wonder if I'll be mesmerized enough by this one to forgive them for stripping the story out of all its book's meaning, it does seem very different from the novel.

@Sati-Thank you. I hope you will be able to see it as I was blown away by it. I haven't read the book but I have heard that it does deviate from the book as the film itself is just mesmerizing.

Yes! So glad you liked this one. Really, great review here. And man, how fucking good was Johnnie Burn's sound work? It was a star in and of itself. I'm going to be thinking about this film for a long, long while. Hope you have a chance to see Enemy soon!

@Alex Withrow-The sound design was one of the things about the film that won me over. It's already in my top 5 films of 2013. That's how fucking good it is.

The premise sure sounds audacious, but I've become more curious about this than I initially was. Nice to hear Scarlett is very good here, I've come to like her more than I did say 2-3 years ago as well.

@ruth-For me, this is the most daring performance that Scarlett has done. I always knew she was better than the Jessica Albas and Blake Livelys of the world yet Hollywood never really did enough to showcase that.

It was at times, scary to watch since her character is an alien while I was also ravaged by the fact that she isn't saying much and allows herself to be very restrained which not many actors could do.

Very good review. I will agree that the sound desing and the music are very good This is a very hypnotic film. Glad to see you liked it

@The Vern-Thanks. I'm glad there's some positive feedback towards this film.