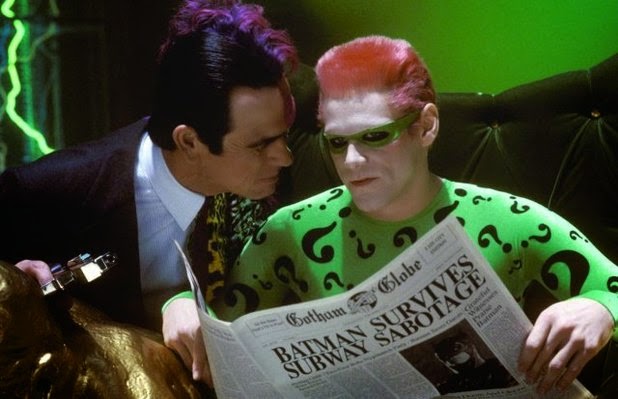 Based on the DC Comics by Bob Kane, Batman Forever is the story of Batman facing new foes as he also deals with his own traumas and identity while taking in a young man who would become his new partner in Robin. Directed by Joel Schumacher with a screenplay by Akiva Goldsman, Lee Batchler, and Janet Scott-Batchler from a story by the Batchlers, the film is the third film of the franchise that began with the 1989 film as Val Kilmer plays the role of the Caped Crusader and Bruce Wayne with Chris O’Donnell in the role of Dick Grayson/Robin while the villains in Harvey “Two-Face” Dent and Edward Nygma/the Riddler are respectively played by Tommy Lee Jones and Jim Carrey. Also starring Nicole Kidman, Pat Hingle, Drew Barrymore, Debi Mazar, and Michael Gough. Batman Forever is an entertaining but messy film from Joel Schumacher.

The film is about Batman facing two new villains as he tries to cope his role as Bruce Wayne and Batman where he also deals with his parents’ death just as a young man named Dick Grayson just lost his parents. While Batman deals with the maniacal Harvey “Two-Face” Dent, who was Gotham’s district attorney until an incident left the left-part of his face scarred as Batman was blamed for it, and a former Wayne Enterprise employee in Edward Nygma who becomes the Riddler. Adding to Wayne’s complicated life is the presence of a psychiatrist Dr. Chase Meridian (Nicole Kidman) who is obsessed with Batman as Wayne goes to her over his own identity issues. In taking the young Grayson, Wayne eventually realizes that he’ll need Grayson to stop Two-Face and the Riddler as Grayson would become Batman’s new sidekick Robin.

The film’s screenplay does create some nice reference to the origin stories of Robin, Two-Face, and the Riddler as they are interesting characters. Yet, the script is much-more lighthearted in its approach to action by infusing some humor into the film as it relates to the Riddler who creates an invention that would extract information from other people’s minds as he would be the one to discover Wayne’s secrets. They’re among some of the elements of the film’s script that works yet there’s some things that don’t work as the characterization of Dr. Meridian is she is this woman whose obsession for Batman makes her somewhat unprofessional as a psychiatrist. Plus, she becomes this damsel-in-distress later on as the writing doesn’t really give her more to do while some of the re-hashing of Bruce Wayne’s past is definitely uninspiring since it’s stuff that audiences already know.

Joel Schumacher’s direction does have some nice moments as the presentation of the film is far more colorful than its predecessors that were helmed by Tim Burton. Even as Schumacher was able to keep things lively in some of the film’s humor and action sequences with some dazzling compositions and moments that are very entertaining. Yet, there’s some moments in Schumacher’s direction that doesn’t work as there is a bit of cheese in some of the dialogue and action sequences where it’s clear that Schumacher wants to create something that is fun but there’s things that feels off since Batman is really a very dark character. One aspect of the direction that is very annoying are the slanted camera angles which are overdone as it makes not sense to some of the visuals in the film. While the film does have an amazing climax, it does get over-the-top at times where it would play into Batman finally accepting his two identities though some of the presentation comes off as very silly. Overall, Schumacher crafts an exciting but dizzying film about Batman and Robin fighting Two-Face and the Riddler.

Cinematographer Stephen Goldblatt does nice work with some of the film‘s extravagant lighting for the look of Gotham as well as creating some shadows and lighting schemes to play into some of the darker moments of the film. Editors Dennis Virkler and Mark Stevens do terrific work with the editing with its use of flashback montages and rhythmic cuts for some of the film‘s action scenes. Production designer Barbara Ling, with art directors Christopher Burian-Mohr and Joseph P. Lucky and set decorator Cricket Rowland, does excellent work with the set pieces from the look of Gotham as well as the secret lair of Two-Face. Costume designers Bob Ringwood and Ingrid Ferrin do some good work with the clothes that Two-Face and the Riddler wear though the look of the Batsuit with nipples and codpieces are just ridiculously bad.

Special makeup designer Rick Baker does amazing work with the look of Two-Face where his left face is badly scarred to play into his unstable personality. Visual effects supervisors Andrew Adamson, Eric Durst, Boyd Shermis, and David Stump do some wonderful work with the miniatures of Gotham and some of the CGI look in some of its action sequences. Sound editors John Levesque and Bruce Stambler, along with sound designers Frank Kniest and Roland N. Thai, do some superb work with the sound from the way Riddler‘s machine extracts information from other people‘s minds to the layering of sounds in the action scenes. The film’s music by Elliot Goldenthal is pretty decent for its orchestral bombast with some triumphant moments but also some humorous pieces while music supervisor Jolene Cherry brings in an eclectic soundtrack that features song by the Flaming Lips, U2, the Offspring, Brandy, and Seal.

The casting by Mali Finn is brilliant for the ensemble that is created as it features some notable appearances from Don “The Dragon” Wilson as a gang leader Grayson encounters, Jon Faverau as a Wayne Enterprise assistant, Rene Auberjonois as the doctor from Arkham Asylum, Joe Grifasi as a bank security guard that Batman saves early in the film, and Ed Begley Jr. as Nygma’s boss who is later killed by Nygma. One small role that isn’t very good is the Gossip Gertie character performed by Bob Kane’s wife Elizabeth Sanders as it’s a very annoying character that serves no purpose to the film. Michael Gough and Pat Hingle are terrific in their respective roles as Alfred Pennyworth and Commissioner Gordon as Gough serves as a father-figure to Grayson while Hingle has Gordon be the man who would bring Grayson to Bruce Wayne.

Drew Barrymore and Debi Mazar are both fun to watch in their respective roles as Two-Face’s assistants Sugar and Spice. Nicole Kidman is alright as Dr. Meridian Chase as this woman who has some charm and sexiness but the writing doesn’t really do any favors for Kidman as her character turns out to be very obsessed with Batman. Chris O’Donnell is excellent as Dick Grayson/Robin as a lost young man wanting vengeance on Two-Face while asking for help from Batman. Tommy Lee Jones is fantastic as Two-Face as this maniacal man who uses a coin to make decisions while wanting to kill Batman at any cost.

Jim Carrey is great as the Riddler as this former Waynes Enterprise employee who wants to get rid of Batman for not accepting his invention and become even richer than Batman as Carrey is just fun to watch. Finally, there’s Val Kilmer in a pretty good performance as Bruce Wayne/Batman as Kilmer does maintain that brooding persona of Batman but doesn’t really make Wayne very interesting while some of the characterization of Batman is off as it includes a shot of Batman smiling. Batman is not supposed to smile.

Batman Forever is a solid film from Joel Schumacher. Thanks to the lively performances of Jim Carrey and Tommy Lee Jones as the villains, it’s a film that is very entertaining but loses a lot of the dark aspects of the Batman character in favor of being more accessible to a younger audience. Especially as Schumacher’s colorful presentation is a bit overwhelming at times where it allows the film and Batman to lose its edge. In the end, Batman Forever is a good but troubling film from Joel Schumacher.

I quite like Val Kilmer in the role of Batman, though I still put Keaton ahead of him and Bale of course as my ultimate favorite. I can barely remember the film as a whole though, it's all just so cartoonish that I don't feel like seeing it again.

Yeah, it was on TV recently along with the first two films that Tim Burton did. I liked it when I was 14 years old but watching it now. There's stuff that I don't like about it. At least it's not Batman & Robin. That film hella-sucked.

I've never really minded this film. So I appreciated your review, as most all others written today seem to be scathing just for the purpose of being scathing. Batman Forever is a tad insane with its pulp fiction, but I dunno, the 10-year-old me loved it, so... what the hell, you know?

@Alex Withrow-I was 14 when I first saw it and there is still stuff that I liked about it but there's now things about the film that I don't like. I don't think it's as bad as people say it is. Besides, it's not fucking Batman & Robin.

It is better than Batman & Robin but that's about it. Val Kilmer was actually pretty good and sorta continues in Keaton's vein but he is out of place with how wacky the rest of it is. Carrey is really fun but TLJ annoyed me. Gotham was an overwhelming sight & not necessarily in a good way. And it's definitely messy. Sorry, just not a fan of this one. Btw, the slanted camera angles, like the rest of the movie, is an homage to the old Adam West TV Batman. The bad guys were often shot at an angle.

@Wendell Ottley-Burton's vision of Gotham was amazing but what Schumacher did was silly. I'm not a fan of slanted angles. It's just one of these things that I just don't like.