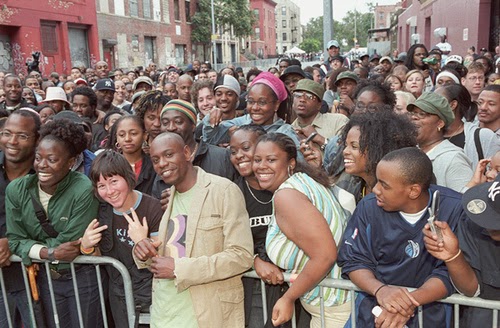 Directed by Michel Gondry and written and starring Dave Chappelle, Dave Chappelle’s Block Party is a documentary in which the comedian holds a block party in Brooklyn as it would feature a concert with several acts in R&B and hip-hop. The film would also showcase the stress that Chappelle was going through that would lead to the end of highly-revered comedy show in late 2004. Featuring performances by the Fugees, the Roots, Jill Scott, Kanye West, Mos Def, and Erykah Badu. The result is a fun and exciting documentary from Michel Gondry and Dave Chappelle.

On September 18, 2004, Dave Chappelle organized a block party in Brooklyn that would be a concert for the people not just from Brooklyn but also from his hometown of Dayton, Ohio whom he personally invited. Throughout the film, Chappelle expresses his love for Dayton and his locals who treat him like he’s one of their own and not think about him as the comedian that’s famous for. Among the people he brought in from Dayton is the Central State University Marching Band as they would perform with Kanye West at the show where Chappelle would converse with acts like the Roots, Dead Prez, Jill Scott, Mos Def, Talib Kweli, and several others about music and art. The film would also include a one-off reunion from the Fugees that was the big surprise of the concert.

Through Michel Gondry’s very simple and engaging direction as it’s shot in 16mm film blown-up to 35mm where Gondry gets the chance to keep things lively as Chappelle seems relaxed throughout the shoot. Even as he talks about his frustrations with fame and some of the expectations he’s had as a comedy as it relates to the comedy show and big money deal that he would later walk away from some time later after the concert was filmed. Gondry would also have Chappelle converse with the locals in Brooklyn where they get a chance to speak about their views on the world where a lot of it is very light-hearted and humorous. Even as a couple who lives in a nearby church admit they’re not into hip-hop yet did manage to have fun at the show.

It’s apparent that the film is inspired by the 1973 concert documentary Wattstax in terms of its presentation and moving back-and-forth from the concert performances and interactions with the people in Brooklyn and Dayton. With the help of Ellen Kuras’ colorful cinematography, the stylized editing of Sarah Flack, Jeff Buchanan, and Jamie Kirkpatrick, and the sound editing of David F. Van Syke, the film has a very vibrant and crisp look that does play to the film’s simplicity while the concert performances from the act is always exciting and fun where it’s shot on the stage and where the audience is at. With additional help from production designer Laura Faggioni, art director Pete Zumba, and costume designer Whitney Kyles for the look of the stage and the clothes some of the performers wear. There’s a realness to the story as well in the performances where none of it feels boring as the music is a major highlight of the film that features some contributions from music supervisor Corey Smyth.

Dave Chappelle’s Block Party is an excellent concert documentary from Michel Gondry. It’s a film that is a very enjoyable one where it has some good tunes from the artists performing as well as some funny jokes from Dave Chappelle. Even as it’s a very positive film where it’s more about having fun and creating a community through music, art, and comedy. In the end, Dave Chappelle’s Block Party is a extraordinary film from Michel Gondry.

Michel Gondry Films: Human Nature - Etneral Sunshine of the Spotless Mind - The Science of Sleep - Be Kind Rewind - Tokyo!-Interior Design - (The Thorn in the Heart) - The Green Hornet - The We & the I - Mood Indigo - (Is the Man Who is Tall Happy?) - (Microbe & Gasoline)

Such a cool movie. It helps that I'm a hip hop head, Lol. Saw this when it first came out and Chappelle hadn't quite took off from the show yet. So when I heard him speaking about stress I didn't really pick up on how much it was weighing him down. Funny how time changes our perspective. Nice review.

Yeah, I had fun watching it. I'm not a big hip-hop fan but I definitely enjoyed this. Even seeing Kanye before he became the big asshole that he is now w/ that trashy bitch.

I understand why Chappelle isn't doing the show anymore. I think too much money and too much expectations just fucked with his head. He just wants it to be fun and stuff. Isn't that what life is supposed to be?

This movie deserves a bit more recognition I think. It's such an entertaining and cool concert film and Chappelle is so likeable. Of course he's hilarious but this movie opened him up a bit more and I think that makes it required viewing for any of his fans. It certainly helps that it had such a great director.

@Jess-It's a film that I think fans of Chappelle should see as I hope he does another comedy special but have him do a few one-offs or a stage show. Let him give the chance to be funny on his own terms and not deal with all sorts of bullshit.