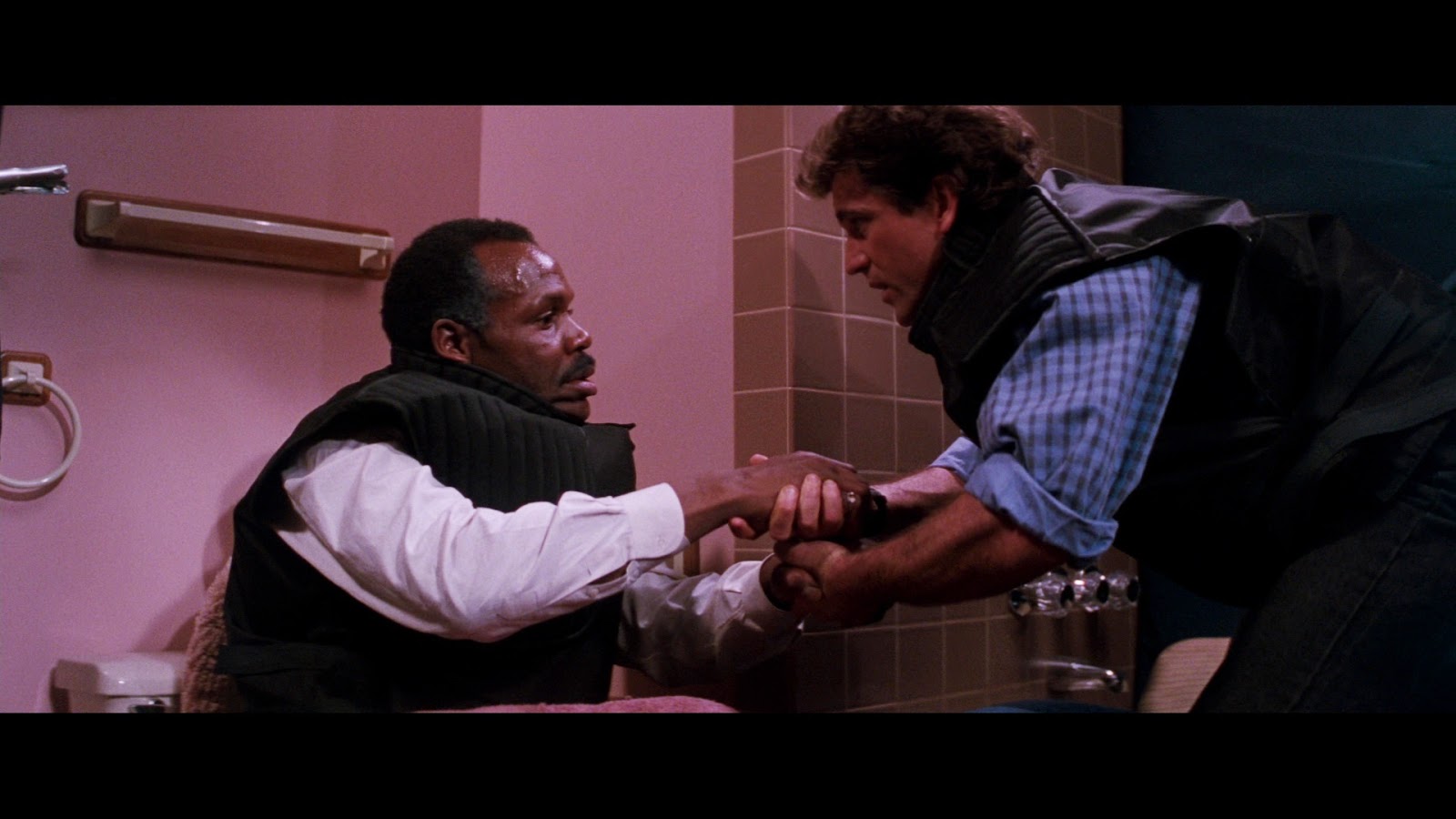 Directed by Richard Donner and screenplay by Jeffrey Boam from a story by Shane Black and Warren Murphy, Lethal Weapon 2 is the follow-up to the previous film from 1987 where Martin Riggs and Roger Murtaugh who are tasked to protect a federal witness who is involved with a smuggling operation from South African dealers who are protected by diplomatic immunity. The film is another mixture of action with buddy comedies as Mel Gibson and Danny Glover reprise their respective roles as Riggs and Murtaugh as they‘re joined by Darlene Love, Traci Wolfe, Mary Ellen Trainor, Damon Hines, Ebonie Smith, and Steve Kahan who all reprise their roles from the previous film. Also starring Joe Pesci, Patsy Kensit, Derrick O’Connor, and Joss Ackland. Lethal Weapon 2 is an explosive and enthralling film from Richard Donner.

When a group of South African dealers catch the attention of Martin Riggs and Roger Murtaugh and the rest of the LAPD, what happens becomes a war between good and bad in a film where these two men try to do whatever to get these men despite their protection under diplomatic immunity. Once they are reassigned to protect an obnoxious federal witness in Leo Getz (Joe Pesci) who is connected to this smuggling case involving these South African government officials led by this consulate. Riggs and Murtaugh do whatever to nab these men and find evidence that can allow them to be tried under American jurisdiction but complications ensue once these men make the war with the LAPD very personal which only push Riggs and Murtaugh to the edge.

The film’s screenplay definitely shows these two mismatched partners not only becoming closer and bring out the best in each other but also give them a chance to have an element of balance into their different personalities. Especially as Riggs often goes to Murtaugh’s home where he reveals to Murtaugh’s wife Trish (Darlene Love) about his wife’s death years ago which shows Riggs opening up more to Murtaugh and his family. Upon getting assigned to protect Getz, the element of comedy starts to get more into play where Riggs and Murtaugh find a foil in the often irritating Getz who is this accountant that always curse and complain about things as he also knows a lot as he proves to be a vital asset to Riggs and Murtaugh in their case.

The antagonist in these South African smugglers and criminals led by this consul-general named Arjen Rudd are men who are driven by money and power as they transport illegal currency to apartheid-era South Africa. Even as the case would have revelations about Riggs’ own past in laundering money for smugglers which he wasn’t proud of as it played into his decisions to join the police force. Rudd and his men not only use devious tactics to intimidate Riggs and Murtaugh where they would break-in the latter’s home to scare him and his family. Even the rest of the LAPD get pushed to the breaking point as Riggs and Murtaugh’s superior Captain Murphy (Steve Kahan) wants to go after them but various jurisdiction issues prevent them from doing what is right. Once the film’s third act had the LAPD pushed to the breaking point where both Riggs and Murtaugh realize that these men don’t respect the law. The two would do whatever it takes to carry out their own brand of justice.

Richard Donner’s direction is quite extravagant in terms of action sequences and the fact that he has something to say about the idea of apartheid. Even where he would put some humor such as a scene where Murtaugh and Getz enter the South African consulate embassy where they would harass officials in order to get Riggs to antagonize and confront Rudd and his men. While much of the humorous moments are shot in intimate manners as it would include some very funny gags such as reaction to Murtaugh’s daughter Rianne (Traci Wolfe) making her acting debut in a condom commercial. It is balanced by this air of suspense and action that plays out in the film where it adds to the stakes of what Riggs and Murtaugh have to deal with.

The action sequences are very explosive that includes this montage where Rudd’s men do horrific things to try and wipe out the LAPD as there’s some dark elements that play into the drama. Even as Getz becomes a target which adds to Riggs and Murtaugh to take the law into their own hands where it’s third act features some of the most elaborate sequences ever created. Presented in a wide shot with some unique camera angles, it is definitely a highlight that would be followed by a major climax as it reveals that diplomatic immunity or not. One must never ever fuck with Riggs and Murtaugh. Overall, Donner creates a very thrilling and compelling film about two guys going up against a group of politically-racist criminals.

Cinematographer Stephen Goldblatt does excellent work with the cinematography from the usage of lights for many of the scenes set at night to the array of interior lights for the cold offices that Rudd works at. Editor Stuart Baird does brilliant work with the editing from the fast-paced cuts of the opening chase sequence to the slower moments for its humor and suspense. Production designer J. Michael Riva, with art directors Richard Berger and Virginia L. Randolph and set decorator Marvin March, does amazing work with the set design from the look of Rudd‘s home as well as the office he has in the South African embassy.

Sound editor Robert G. Henderson does superb work with the sound from the layer of sounds of gunfire and explosions to the quieter moments involving conversations and in some of the film‘s humor. The film’s music by Michael Kamen, Eric Clapton, and David Sanborn is fantastic for its mixture of orchestral bombast courtesy of Kamen to the sound of blues and jazz from Clapton and Sanborn to play into the humor and drama while the soundtrack features a cover of Bob Dylan‘s Knockin‘ on Heaven‘s Door by Clapton, Sanborn, and Randy Crawford and songs by the Beach Boys and George Harrison.

The casting by Marion Dougherty and Gail Levin is great as it features notable small roles from Jack McGee as a carpenter fixing Murtaugh‘s home, Dean Norris and Jenette Goldstein as a couple of fellow detectives, Traci Wolfe, Damon Hines, and Ebonie Smith as Murtaugh‘s three children, and Mary Ellen Trainor in a wonderful role as the police psychiatrist Dr. Stephanie Woods who is treated with humor by Riggs. Steve Kahan is terrific as Captain Murphy who tries to make sure Riggs and Murtaugh keep themselves in check as they will be in big trouble if they interfere with Rudd who is protected by diplomatic immunity. Darlene Love is superb as Murtaugh’s wife Trish who accepts Riggs into her family as she learns about what happened to his wife. Patsy Kensit is fantastic as Rudd’s secretary Rika who secretly despises Rudd and his views as she would fall for Riggs and his antics. Derrick O’Connor is excellent as Rudd’s henchman Pieter Vorstedt who is a man that proves to be extremely devious with his own tactics as he also has some revelations for Riggs which would motivate him for vengeance.

Joss Ackland is brilliant as Arjen Rudd as this consul official for the South African government who masterminds many of the schemes for the sake of profit as he carries an air of arrogance over how’s protected by diplomatic immunity. Joe Pesci is hilarious as Leo Getz as this accountant whom Riggs and Murtaugh has to protect as he knows a lot about what Rudd is doing as he brings a lot of charm to his role as well as the fact that he is a great foil for both Riggs and Murtaugh. Finally, there’s Mel Gibson and Danny Glover in remarkable performances in their respective roles as Martin Riggs and Roger Murtaugh. Gibson maintains the very crazy and funny approach to his character while also revealing elements of how sensitive he is. Glover continues in playing the straight man as well as bring very funny as he and Gibson continue to have this electric chemistry.

Lethal Weapon 2 is a marvelous film from Richard Donner that features great performances from Mel Gibson, Danny Glover, and Joe Pesci. The film isn’t just a sequel that manages to just as good as its predecessor as well as be very entertaining. Even as it play into the world where two guys trying to beat up the bad guys in some of the most explosive moments in the film. In the end, Lethal Weapon 2 is phenomenal film from Richard Donner.

I remember enjoying this when I saw it years ago. I should rewatch it at some point. It's definitely one of the best buddy comedies out there.

It's been on HBO/Cinemax for the past few months as I'm now doing the entire series.

Shane Black's script originally had Riggs die at the end but the studio would not allow it.

This is a sequel that manages to surpass the original.

@Luke-I think if they had stuck w/ the original ending. It would've been a daring but unpopular decision since audiences were so invested in the chemistry between Gibson and Glover. I think the studio is on the right with their ultimate decision as it led to a third film which I really liked a lot.