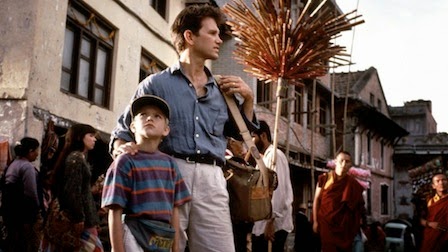 Directed by Bernardo Bertolucci and screenplay by Rudy Wurlitzer and Mark Peploe from a story by Bertolucci, Little Buddha is the story of a young American boy who is believed to be the reincarnated version of a legendary Buddhist mystic as the boy goes on a journey to learn about the Buddhist whom he might have been in a previous life. The film is a mixture of spirituality with elements of fantasy all from the perspective of a child who learns about the man he is believed to be in another life. Starring Keanu Reeves, Chris Isaak, Bridget Fonda, Alex Wiesendanger, and Ruocheng Ying. Little Buddha is a visually-striking but uneven film from Bernardo Bertolucci.

The film revolves around a young American boy who is believed to be the reincarnation of a mystical Buddhist legend as he asked to go to Tibet with a monk as the boy’s father joins them. While the boy learns about the story of this mystic who was called Siddhartha (Keanu Reeves), he is intrigued by the idea of being connected to the world of Buddhism though his father isn’t so sure until the death of colleague forces him to accompany the boy to Nepal. It’s a film that has a unique premise with a narrative that parallel the journey of this boy named Jesse (Alex Wiesendanger) and Siddhartha. While it is an interesting idea, the result through the film’s script is unfortunately underwhelming as well as very uneven.

Notably as many of the supporting characters aren’t as fleshed out as aspects in the development of Jesse’s father Dean (Chris Isaak) feels abrupt when he goes from being dismissive and then goes on the journey due to a friend’s death. Things in the third act do become clunky when it is learned that two other children are considered candidates for the reincarnation of Siddhartha as one of the kids comes out as very smug. While there are elements in this story that are compelling in the way it plays into Siddhartha’s legend and his search for enlightenment. It tends to overshadow the story that involves Jesse as his story is too lightweight to really keep things engaging despite these themes on spirituality.

Bernardo Bertolucci’s direction definitely has a lot of entrancing moments in the way he films various locations in Nepal as well as Seattle as he creates something that has an air of beauty and mysticism. Bertolucci’s usage of wide shots definitely capture the wondrous world of Bhutan and some of the locations in Nepal as it has this very otherworldly feel. Even in the sequence involving Siddhartha as it has this air of mysticism where Bertolucci does inject a lot of strange images that play into Siddhartha’s development as a mythical figure and how he would become influential. Bertolucci’s approach to the scenes in Seattle and in Jesse’s story are intimate where there are some lively and fun moments. Yet, they don’t hold up to the story involving Siddhartha as the attempt for the two stories to collide in a strange sequence comes off as very silly. Though the story does end on a somewhat somber note, it does have a nice payoff though it isn’t able to live up to the messiness of the film. Overall, Bertolucci creates an interesting but very flat and underwhelming film about a boy discovering the world of Buddhism.

Cinematographer Vittorio Storaro does brilliant work with the film‘s very colorful and stylish cinematography with its use of very sunny and exotic red-orange color schemes for the scenes set in Nepal while going for blue filters in the scenes set in Seattle with some unique lighting set-ups as it‘s a major highlight of the film. Editor Pierto Scalia does excellent work with the editing with its usage of jump-cuts and other stylish cuts including a few montages to play into the Siddhartha story. Production/costume designer James Acheson, with supervising art director Andrew Sanders and set decorators Bruno Cesari and Manohar Shrestha, does fantastic work with the look of the home that Jesse lives in as well as the Buddhist temple in Seattle and temple in Bhutan while the costumes are casual with the exception of the robes the monks wear.

Computer effects supervisor Val Wardlaw does some decent work with the visual effects to play into some of the things that involve Siddhartha in his development as well as things in his search for enlightenment. Sound editor Eddy Joseph does nice work with the sound as it plays into some of the air of mysticism in Siddhartha‘s surroundings as well as the layers of sound for the scenes in Seattle. The film’s music by Ryuichi Sakamoto is amazing for its mixture of broad and lush orchestral arrangements that is mixed in with Eastern music from strings and Indian music to play into the sense of mysticism.

The casting by Howard Feuer, Priscilla John, and Fabrizio Sergenti Castellani is terrific as it features a well-rounded ensemble as it includes some notable small roles from Jo Champa as Jesse‘s nanny Maria, Sogyal Rinpoche as the young monk Kenpo, and Geshe Tsultim Gyelsen as the teacher of the old monk. Raju Lal is terrific as the Nepalese boy Raju who displays a sense of innocence and exuberance that appeals to Jesse while Greishma Makar Singh is OK but very un-likeable as the third candidate Gita as she is a character that is very arrogant as there aren’t many qualities about her that takes her character seriously. Alex Wiesendanger is fantastic as Jesse as this young boy who is believed to be a reincarnated Buddhist figure as he is a very lively child that is excited but also intrigued by the story of Siddhartha.

Ruocheng Ying is excellent as the monk Lama Norbu as a man who has been searching for the reincarnated figure of his mentor as he thinks it’s Jesse as he is this wise and calm individual that had seen a lot about the world. Chris Isaak is decent as Jesse’s father Dean as a man who is unsure about the news on Jesse until the death of a friend forces him to go into a journey where Isaak has some moments but the way his character is written is very messy. Bridget Fonda is wonderful as Jesse’s mother Lisa who is intrigued about the idea of Jesse being a reincarnated figure as she displays a warmth and charm to her performance yet ends up being underused as she is sorely missed in the film’s second half. Finally, there’s Keanu Reeves in a superb performance as Siddhartha as this figure that comes to term with his identity and his powers as Reeves manages to make his character quite engaging despite his issues with his accent and the ridiculous amount of makeup he had to wear.

Little Buddha is a captivating but very lackluster film from Bernardo Bertolucci. Despite some interesting ideas on the concept of Buddhism and reincarnation, it’s a film that has a lot to say but ends up being underwhelming as well as very uneven due to two different storylines that isn’t able to mesh as one. In the end, Little Buddha is a very disappointing and messy film from Bernardo Bertolucci.

I've been wanting to check this one out. I've only seen The Last Emperor & Stealing Beauty from Bertolucci. I had no idea Chris Isaak is in this as well. Interesting that you said Keanu was good though, I might check this out just for that.

For me, I think this is one of Bertolucci's weakest films as I had some issues with it. I prefer his European work in the 1970s though I do love The Last Emperor and I also enjoyed Stealing Beauty which I think is underrated. I would much prefer The Conformist and Last Tango in Paris which I think are his best films that I've seen so far.