An Officer and A Gentleman 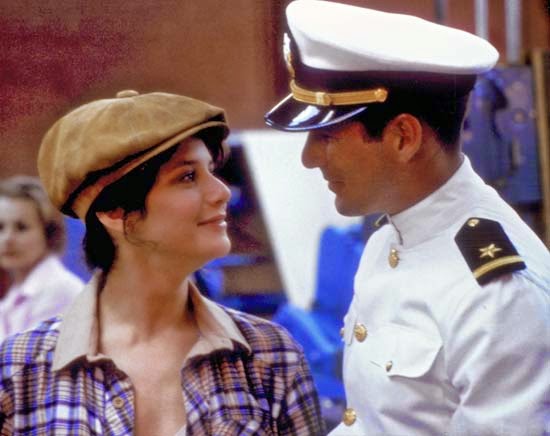 Directed by Taylor Hackford and written by Douglas Day Stewart, An Officer and a Gentleman is the story of a troubled man who joins the naval academy as he contends with an uncompromising drill sergeant as well as his own demons while falling for a local woman. The film is an exploration into a young man who is trying to find himself through the Naval academy as he tries to escape the life he is destined to be from his own father. Starring Richard Gere, Debra Winger, David Keith, Lisa Eilbacher, Harold Sylvester, Lisa Blount, Grace Zabriskie, David Caruso, Robert Loggia, Tony Plana, and Louis Gossett Jr. An Officer and a Gentleman is a riveting film from Taylor Hackford.

Set in the American Pacific Northwest, the film revolves a Naval officer candidate who arrives at the naval academy to make something of himself as he deals with a no-holds-barred drill sergeant while he falls for a local woman who is eager to get out of her small town life. It’s really a film that is about two people trying to make changes in their lives as they both have to contend with themselves and their own environments. Especially as they’re eager to have a chance to get a better life in a world where there’s many expectations and such. For Zachary Mayonnaise (Richard Gere), he hopes to succeed as a naval aviator officer in the hopes that he doesn’t become like his father (Robert Loggia) who has a reputation for being a drunk and chasing whores overseas where the young Zachary was forced to live him following his mother’s suicide.

Douglas Day Stewart’s screenplay explores Mayonnaise’s desire to better himself as he is also known for being a loner that feels guilty for his mother’s death. Upon arriving at this naval academy, he contends with Gunnery Sgt. Foley (Louis Gossett Jr.) who is uncompromising in his tactics but knows what to do in ensuring that his recruits would have to succeed as he sees Mayonnaise as a troublemaker. Even when he discovers that Mayonnaise does do a side business of selling pre-shined shoes and belt buckles for money where Sgt. Foley would haze him to wonder why Mayonnaise wants to be a pilot and why he’s at the academy. While Mayonnaise would befriend other candidates including Sid (David Keith), Seeger (Lisa Eilbacher), and Perryman (Harold Sylvester), he would also do whatever it takes to prove that he can be an officer.

During breaks at the academy, he would meet and fall for Paula Pokrifi (Debra Winger) as she is among the group of women who hopes to bag an officer so they can get out of their life of working in the factory and staying in a small town with little hope. Her friend Lynette (Lisa Blount) would bag Sid as Paula deals with Mayonnaise’s moody behavior and unwillingness to be close to someone as she copes with not having a good life. Especially as she is a naval officer’s daughter who abandoned her mother (Grace Zabriskie) when Paula wasn’t even born as it plays into the roles women have and uneasy one where Lynette would make an announcement for Sid that would compromise his chances to become a naval pilot. Especially as Mayonnaise becomes more reliable in helping others succeed instead of himself as he is unsure if he can be a gentleman for Paula because of his own demons.

Taylor Hackford’s direction is quite simple as he shoots the film largely in the state of Washington for its Pacific Northwest setting along with a few shots set in the Philippines for Mayonnaise’s flashback scene as a kid. Much of it is presented with simple compositions where Hackford use a few wide shots for the setting while maintaining an intimacy into the training sequences and other moments involving Mayonnaise and the hazing he would get from Foley. The usage of close-ups and medium shots are quite prevalent while Hackford does bring in moments of humor along with some intense moments to play into Mayonnaise’s loner persona as he doesn’t make him afraid of being selfish. Even as the moments where Mayonnaise would be hazed with such brutality as it would have this key emotional moment for Mayonnaise about why he refuses to quit.

Hackford also amps up the drama for the film’s third act as it relates to Sid’s own situation with Lynette that would prompt Mayonnaise to do something while coping with the people in his life that he lost. Even as he wonders if is destined to become his own father as it plays into this desire of wanting to not just an officer but also a gentleman in order to give Paula the sense of hope that she needs. Overall, Hackford creates a very engaging and compelling film about a man trying to start a new life in a naval academy and help a woman to escape her own dreary environment.

Cinematographer Donald E. Thorin does excellent work with the cinematography as it‘s quite straightforward to play into the look of its location where the colors are a bit dark and gray while going for more low-key lighting for the scenes at night. Editor Peter Zinner does brilliant work with the editing to capture the intensity of the training along with some straightforward cutting to play into some of dramatic events as well as some montage-style cutting for Mayonnaise‘s flashback scenes. Production designer Philip M. Jeffries, with set decorator James L. Berkey and art director John V. Cartwright, does terrific work with the dorm rooms the naval candidates live in as well as some of the locations such as the training bases and the motel where Mayonnaise and Paula would go to.

Sound editor Clive Smith does nice work with the sound as it‘s very low-key as it plays into the training the candidates go through. The film’s music by Jack Nitzsche is superb for its low-key yet somber score as it features elements of triumphant pieces with its usage of guitars and keyboards while being low-key at times. The film’s music soundtrack features contributions from Pat Benatar, ZZ Top, Dire Straits, Van Morrison, Morris Albert, and the ballad Up Where We Belong that is sung by Joe Cocker and Jennifer Warren that is written by Nitzsche, Buffy Sainte-Marie, and Will Jennings as it’s one of the finest love songs of the 1980s.

The casting by Lynn Stalmaster and Nancy Klopper is fantastic as it features notable small roles from Robert Loggia as Mayonnaise’s alcoholic naval seaman father, Tommy Petersen as a young Mayonnaise, Victor French as Paula’s stepfather who doesn’t like naval officers, John Laughlin as an unfortunate townie who got beat up by Mayonnaise, Grace Zabriskie as Paula’s mother, Ed Begley Jr. as the voice of an altitude chamber instructor, Tony Plana as officer candidate Serra, and David Caruso as the naïve officer candidate Daniels. Harold Sylvester is terrific as officer candidate Perryman as a family man trying to make it so he can provide for his family while Lisa Eilbacher is brilliant as officer candidate Seeger as one of the few women who is trying to make it as despite her lack of physical prowess in its obstacle course.

Lisa Blount is excellent as Lynette as a local woman who wants the same thing that Paula wants but a series of misunderstandings would put her into trouble with Sid. David Keith is superb as Sid as another officer candidate who is also trying to succeed until he learns that Lynette might be pregnant as he wonders about what to do. Louis Gossett Jr. is phenomenal as Sgt. Foley as a drill sergeant who is quite tough with his candidates yet is also preparing them for what is to come in combat as he’s also a man that is quite fair as he tries to push Mayonnaise to be a better man and see if he’s worthy of being an officer. Debra Winger is amazing as Paula as a factory worker who is eager to get out of her small town existence as she falls for Mayonnaise as well as try to understand his loner persona. Finally, there’s Richard Gere in an incredible performance as Zack Mayonnaise as a naval officer candidate eager to succeed as he copes with his own guilt and selfishness while finding ways to become a better man for himself and for Paula.

An Officer and a Gentleman is a remarkable film from Taylor Hackford that features great performances from Richard Gere, Debra Winger, and Louis Gossett Jr. It’s a film that isn’t just a compelling romantic drama but also a character study that explores a young man trying to make it in a naval academy to attain a better future for himself. In the end, An Officer and a Gentleman is a tremendous film from Taylor Hackford.

Thanks in large part to Winger, Gere, and Gossett, An Officer and a Gentleman is some of the finest 80s romance cheese there is. All 3 of them just killed it.

Yeah, it is quite cheesy but it's a damn good movie. The whole cast was great. Yet, I read that Gere and Winger didn't get along on set and basically stayed away from each other off-camera. Gere and Gossett though did get along.

Great review! I loved this movie when I was a teen and infatuated with Richard Gere. :-) I re-watched it about a year ago and was surprised at how well it held up. Yes, it's cheesy, but it's well done and has heart, plus -- as you and Wendell mentioned -- the performances are quite good. And Zach Mayo's struggle to become more than what was expected of him really works for me.

@Irene McKenna-It is a film that still holds up no matter how flawed it is. Especially as it showcases why Richard Gere is still beloved by the people. John Travolta was supposed to be star as Mayo and he turned it down. Now people see him as a creep while Gere is pretty much respected.

So glad they didn't cast Travolta! :-)

@Irene McKenna-Travolta doesn't have that quiet anguish that Gere possessed nor could I see Travolta do that "I've got nowhere else to go" scene with conviction.