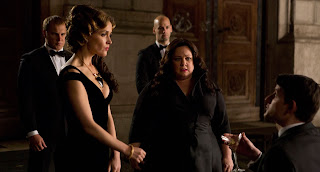 Written and directed by Paul Feig, Spy is the story of a CIA office worker who becomes a field agent for an assignment once the identity of many of its field agents have been compromised as this woman has to stop a crime boss’ daughter from revealing the location of a nuclear bomb. The film is sort of a spoof on spy films where the person that is to save the world is an unlikely person as she doesn’t have the physical requirements to be one but has the heart and determination to get the job done. Starring Melissa McCarthy, Jude Law, Rose Byrne, Jason Statham, Miranda Hart, Bobby Cannavale, Peter Serafinowicz, and Allison Janney. Spy is a witty and adventurous film from Paul Feig.

When the identities of top field agents for the CIA trying to find the location of a nuclear bomb have been revealed to the daughter of a recently deceased crime boss. An analyst who wants to seek vengeance for the death of a spy she cared for is tasked to take part in the assignment where she is initially excited about doing the job but things don’t exactly go her way. The film is essentially a spoof of sorts on spy films where it plays into the idea of a woman, who might not have the typical yet superficial image of spies, as she is given the chance to save the world. Yet, she would endure some humiliating moments in trying to catch her targets while having to deal with a rogue field agent who is trying to do her work in ways that makes him look even stupider than he already is.

It is all part of a world where the villains are dealing with this woman who might be a whole lot easier to kill considering that she doesn’t fit the mold of other spies but it’s also an advantage for the character of Susan Cooper (Melissa McCarthy) who manages to do more than everyone expects from her. Paul Feig’s screenplay does follow conventional elements that is expected in spy films but also creates characters that are very engaging. While Cooper is just a nice analyst who is very good at helping field agents find their way out of a situation where she becomes close with the spy Bradley Fine (Jude Law). When Fine is killed in a mission by the target’s daughter Rayna Boyanov (Rose Byrne), Cooper wants to take the mission to avenge Fine though she is forced to wear a series of humiliating disguises and identities while having her best friend and fellow analyst Nancy (Miranda Hart) to guide her through an earpiece.

The script would also allow moments that are funny such as the antics involving former CIA agent Rick Ford (Jason Statham) who is upset that Cooper gets the assignment which prompts him to go rogue and do stupid things. His character is sort of a play on spies for not just how tough they are and how much bullshit they tend to talk but it is presented in a funny way as Ford is a man who is all brawn but no brains. While Rayna is an antagonist, she is not a traditional one since she is essentially a woman who is a pawn of a bigger scheme while feeling she’s not getting any kind of respect where she and Cooper seem to have a rapport despite the fact that they’re enemies. Even smaller characters like Nancy, CIA boss Elaine Crocker (Allison Janney), and an Italian agent named Aldo (Peter Serafinowicz) manage to do a lot more which add to the story and its comedic tone.

Feig’s direction definitely pays an ode to spy films while managing to be something that is of its own. Notably as it isn’t afraid to not take itself so seriously where some of the comedy is played very loosely and natural. Though much of it is shot largely on location in Budapest with a few second-unit shots of Rome, Paris, and Washington D.C., the film does have a look that is very worldly and lively which is expected in spy films but also manages to have something where it does have this woman be a fish out of water in these places. Most notably where Cooper would think she would have the time of her life traveling to Rome, Paris, Sofia, and Budapest but would often stay in the worst hotels and in the most horrific disguises as a mother of four or a woman with 9 cats. While many of Feig’s compositions are simple, he does manage to create something that is visually exciting while matching it with a naturalist approach to comedy.

Feig is also able to find a sense of energy in the action scenes while knowing where to put in some funny moments that do feel natural and realistic with elements of disbelief for laughs. Feig would also include some very crude humor that involves Cooper having her first kill and her reaction to it is very funny while it is followed by a scene where the CIA analysts are looking into the dead man’s phone and photos where they find some very personal things. The film’s climax which involves this Italian playboy named Sergio de Luca (Bobby Cannavale) and the deal of this nuclear weapon not only continues to find the balance between humor and action but it would also have a payoff that isn’t just funny but also satisfying. Overall, Feig has created a very thrilling and hilarious film about a woman who becomes a spy.

Cinematographer Robert Yeomen does excellent work with the cinematography as it‘s very straightforward and colorful to play into the vibrancy of the locations as well as some inspired usage of lights some of the interiors and for scenes at night. Editors Don Zimmerman and Dean Zimmerman do amazing work with the editing where it allows itself to play into conventional action-style cutting but also with a sense of timing and rhythm to play into the comedy and find ways to mesh both styles. Production designer Jefferson Sage, with art directors Tom Brown and Bence Erdelyi and set decorator Kelly Berry, does brilliant work with the set designs from some of the hotels Cooper goes to as well as the lavish homes and hotels she would meet Rayna and other targets. Costume designer Christine Bieselin Clark does nice work with the costumes from the tuxedos that Fine and Ford would wear to some of the humiliating clothes Cooper would wear in disguise along with some stylish clothes that she and Rayna would wear.

Makeup artist Kati Jatkos and hair stylist Peter Gyongyosi do terrific work with the disguises that Cooper would wear including the different hairstyles along with one notable disguise for Ford. Visual effects supervisor William Mesa does wonderful work with some of the film‘s minimal visual effects that often involve some of the action scenes. Sound editors Beau Borders and Becky Sullivan do superb work with the sound from the way some of the fighting occurs as well as some of the social events and action scenes that the characters encounter. The film’s music by Theodore Shapiro does fantastic work with the film‘s music score as it is quite bombastic for its action scenes while going for something low-key for its comedic moments while music supervisor Erica Weis brings in a fun soundtrack filled with music that ranges from electronic, hip-hop, rock, and pop to bring in an air of excitement.

The casting by Zsolt Csutak does great work with the cast as it features notable small roles from Carlos Ponce and Will Yun Lee as a couple of CIA spies, Jessica Chaffin and Katie Dippold as a couple of CIA analysts who deal with rats and bats in their offices, Zach Woods as a guy putting something mysterious in Rayna’s cocktail, Mitch as a pilot named Colin (no it’s Frederick), Raad Rawi as Rayna’s dad, Michael McDonald as a CIA gadgets man who gives Cooper some unimpressive gadgets, Morena Baccarin as a beautiful CIA spy that Nancy mocks, Nargis Fakhri as an assassin that tries to kill Ford and Cooper, and Bjorn Gustafsson as a bodyguard of Rayna that Cooper would insult. Peter Serafinowicz is fantastic as the Italian spy Aldo who likes to sexually harass Cooper as he thinks she is the most beautiful woman in the world. Allison Janney is superb as CIA head Elaine Crocker where Janney plays it straight while being very cool and calling Cooper out early about her pink eye.

Bobby Cannavale is excellent as the playboy/dealer Sergio de Luca who brings a suave charm to his role as someone who just wants to cash in and sell weapons to the highest bidder. Jude Law is brilliant as Bradley Fine as a CIA agent that has a great working relationship with Cooper as he trusts her while being very good to her. Miranda Hart is amazing as Cooper’s friend Nancy as a CIA analyst who also wants to be a spy as she later joins Cooper in a mission where she gets to do some of the funniest things in the film. Rose Byrne is remarkable as Rayna Boyanov as a crime boss’ daughter who decides to create chaos while trying not to reveal the location of a nuclear weapon where she also has some funny moments with Cooper to show how alike they’re sort of are.

Jason Statham is phenomenal as Rick Ford as it’s a performance where Statham makes fun of the action film persona he’s known for and bring a lot of laughs. Most notably as he’s a guy that talks tough, acts tough, and is very tough but is also an idiot as he has no idea what he is doing half the time while being a risk to everything as it’s just one of the funniest performances ever. Finally, there’s Melissa McCarthy in an incredible performance as Susan Cooper where it’s not jut McCarthy being very funny in enduring all sorts of humility and intense physicality. It’s also in the way she brings a sense of heart into the character that makes her very endearing while not being afraid to show some guts as it is one of her finest performances.

Spy is a marvelous film from Paul Feig that features a winning performance from Melissa McCarthy. Armed with some very exciting and funny moments along with a strong supporting cast that includes scene-stealing performances from Rose Byrne, Miranda Hart, Jude Law, and a hilarious Jason Statham. It’s a film that isn’t just a smart spoof of the spy films but also one that manages to be very funny and extremely entertaining. In the end, Spy is a sensational film from Paul Feig.

Glad you enjoyed this one too Steven! First Melissa McCarthy comedy I've seen and I really dug her here. Agreed Statham was phenomenal here but I wasn't impressed by Bobby Cannavale but then again they didn't give him much to do.

UGH! I feel like a broken record, but I NEED to see this movie!

@ruth-I thought Cannavale was good for what he needed to do yet it was Statham that stole the show.

@Fisti-See it now or else Melissa McCarthy will send Cagney and then Lacey to beat your ass up.

Love Jason praise here! The entire ensemble was indeed wonderful. I hope Jason does more comedies in the future, he is so natural in these

@Sati-I had a blast watching this film and the scenes involving Jason Statham were a right. He was just so loveable in not just being the badass but also as a loveable idiot. Put him in more comedies. Hell, put him in a movie with Meryl Streep. I'd pay good money to see that.