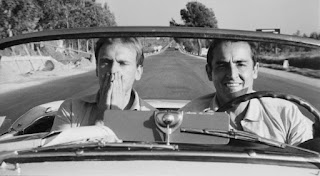 Directed by Dino Risi and written by Risi, Ettore Scola, and Ruggero Maccari, Il sorpasso (The Easy Life) is the story of a bachelor and a law student who go on a road trip from Rome to Tuscany all in the course of an entire day. The film is an unusual road film that mixes humor but with characters dealing with themselves while trying to have a good time. Starring Vittorio Gassman, Jean-Louis Trintignant, Catherine Spaak, Claudio Gora, and Luciana Angiolillo. Il sorpasso is a riveting and exciting film from Dino Risi.

Told in the span of just over twenty-four hours, the film revolves around an impromptu road trip involving a middle-aged bachelor and a young, introverted law student whom he had just met on that day. That’s all the film is about where it is about something that is unplanned and out of the norm where Bruno (Vittorio Gassman) is driving around Rome looking to do something as he wants to call someone where he meets this shy law student named Roberto (Jean-Louis Trintignant). It is a holiday for all of Italy where Bruno wants to have fun while Roberto wants to study as he has an exam in a few weeks. There, the two go on a trip from Rome to Tuscany with stops in various places in Italy where Bruno wants to show Roberto life as it is and what to expect. The film’s screenplay doesn’t play into any traditional structure as it’s more about characters and their encounters with whatever town or restaurant they stop in and such.

The script also allows moments where Bruno talks about things in his life where is able to roam around anywhere while is just experiencing everything as it is. A complete contrast to who Roberto is as he is someone that likes to plan things yet never has the courage to do anything outgoing. Especially when he is unable to talk to women where Bruno would give him a few pointers while a visit to Roberto’s relatives in the middle would show exactly some of the things Bruno is missing in his own life. Even as Bruno would later reveal to have a family of his own which he doesn’t see very often due to the fact that he is always in Rome and in other places while admits that he’s not a natural husband or father. Through the course of the story, it becomes clear how much these two very different men mean to each other even though had only met in the morning. Yet, the script allows them to evolve where Bruno becomes more responsible and concerned for his family while Robert would also loosen up a bit.

Dino Risi’s direction is very lively as it captures not just a moment in time where Italy is basking in a post-war economic and social boom but also in a world where it’s not just cities in Rome that is alive but also these small towns and beaches. Much of the direction is shot on various locations in Italy such as Rome and small towns in the Tuscan region where Risi does keep things lively as he would shoot the film on the road where the camera would be in front of the car or behind the car or driving beside it. There’s something loose that is evident in the way the scenes on the road is depicted while it also has an air of realism where it showcases something that is very alive where even the old can enjoy themselves on the road.

Risi’s approach to close-ups and medium shots not only capture the sense of intimacy and growing friendship between Bruno and Roberto but also in how different they are. One notable scene in the third act has Bruno and his family be shown through windows while Roberto is the only one seen through a door to play into how much of an outsider he is. The direction also features some unique wide shots and some gorgeous camera angles where it is clear that Risi wants to portray Italy in a state of bliss and exuberance that Bruno is in love with while Roberto is more unsure about how to react. Even as he tries to muster the courage to do something and realize that there’s more to life than just studying and planning for big steps in life. Overall, Risi creates an evocative yet exhilarating film about two men taking an impromptu road trip through Italy.

Cinematographer Alfio Contini does brilliant work with the film‘s black-and-white cinematography that captures not just some beautiful images for many of the film‘s daytime exteriors but also maintain something very natural and rich while the scenes at night capture that sense of exuberance in the parties with great detail to some of the lighting in some of those scenes. Editor Maurizio Lucidi does excellent work with the editing as it has this great sense of rhythm in its editing with stylish usage of jump-cuts and dissolves to capture the energy of being on the road. Production/costume designer Ugo Pericoli does superb work with the look of some of the homes that Bruno and Roberto go to while keeping the clothes very casual while playing to the style of the times.

The sound effects by Italo Cameracanna are terrific as it plays into the sound of Bruno’s car horn as well as how the tires are heard on the road due to Bruno’s speedy approach to driving. The film’s music by Riz Ortolani is fantastic as it is largely this jazz-based score that plays into the air of excitement and energy of being on the road while its music soundtrack would consist of rock n’ roll and pop tunes of the times as it plays into a sense of joy that is in these small towns.

The film’s amazing cast includes some notable small appearances from Linda Sini as Roberto’s young aunt Lidia, Claudio Gora as a middle-aged man named Bibi that is dating Bruno’s teenage daughter, Catherine Spaak as Bruno’s daughter Lilli who is quite charming with dubbing by Melina Martello, and Luciana Angiolillo as Bruno’s wife whom he is estranged with yet crashes at her place while seemingly content with Bruno’s lifestyle. Jean-Louis Trintignant is incredible as Roberto as a young law student who is in for the experience of his life as he copes with the situation he’s in as he often does voice-over narration to express his uncertainty and such though much of his voice work is dubbed by Paolo Ferrari. Finally, there’s Vittorio Gassman in a remarkable performance as Bruno as this middle-aged bachelor who invites Bruno upon their brief meeting to join him on a road trip as Gassman brings a lot of charm and energy into his role while knowing when to be someone that is actually quite caring though he is a troublemaker in his own way.

YASSSSSSS!!!! Loved this movie so much...SO MUCH! I just gave it a screenplay win at the Fistis and nominated it's stars. Such an inspired work, and the depth here is remarkable. So glad you liked this.

I'm curious to see it because I heard it's similar to Sideways(which I love). Alexander Payne talks about Il Sorpasso in this clip: http://www.youtube.com/watch?v=fghoJNvrjys

@Fisti-I had fun watching this. It is an incredible film and I know need the Criterion set.

@Chris-I watched it from a TCM airing which mentioned Sideways as I knew Payne was influenced by that film.