The Summer of Twin Peaks Announcement 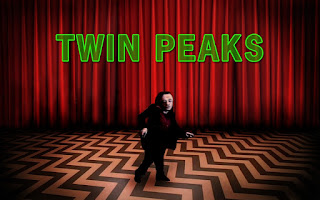 In 2016, the show that captivated audiences in the early 90s will finally make its return for a new season under the direction and supervision of its creators David Lynch and Mark Frost. For years, this was a show that I have been wanting to see as I've only watched the film Fire Walk with Me several years ago. For anyone that has no idea what Twin Peaks is, it's essentially a TV show from 1990 to 1991 that lasted two seasons which revolved around the mysterious death of a high school prom queen named Laura Palmer as the FBI led by Special Agent Dale Cooper leading the investigation. It was a show that is Lynch at its purest in its fascination with the superficiality of small-town America mixed in with the element of darkness from within that also includes strange elements of surrealism.

It was considered a groundbreaking show though its second and final season was very controversial largely due to the interference of ABC executives that forced Lynch away from the show as it would suffer creatively where Lynch would eventually make the 1992 prequel/epilogue film of the series entitled Twin Peaks: Fire Walk with Me. With the show still talked about in the world of pop culture which ultimately led to its upcoming return on Showtime.

While I have reviewed TV before, it is a very different beast than the world of film. It's continuous as well as evolving with each episode. It's definitely not an easy thing to do but I'm willing to take the challenge. I will review each episode individually rather than review the series as a whole thing. The marathon won't just include the 30 episodes in both seasons but also Twin Peaks: Fire Walk with Me and the Missing Pieces collection of deleted scenes from the film. This will be a strange marathon that I will do in the summer but it is a challenge that I'm willing to take.

I thought Lynch had left this reboot?

Matt and I rewatched this show a good year, maybe more ago, definitely long before they announced that it was being reincarnated.
We were too young to watch and appreciate it at the time, but your'e right, it's still a really strong part of pop culture today and it's crazy to imagine that this was on network tv at the time! It's weird even by today's standards.

And I really feel like I need to watch the original...because I never have...and I know that that is shameful.

@Jay-Lynch was out until Showtime gave him what he wanted and more which is why he's back on board.

@Fisti-The show was a Blind Spot that I wanted to see but I feel like the time is now to watch it before the new season arrives.

Really excited for these reviews. It's a great a trippy show. So happy it's coming back.

@Alex-Indeed. I'm going to watch the pilot this weekend and then go through the first season for this month. I have no idea what I'm going into.