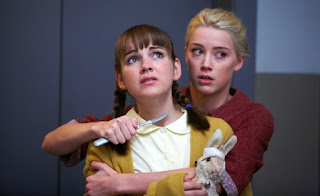 Directed by John Carpenter and written by Michael and Shawn Rasmussen, The Ward is the story of a young woman who is sent to a mental institution after an arson as she is haunted by a ghost from the institution. The film is a psychological thriller set in the mid-1960s where a woman copes with not just a ghost in this institution but why is it haunting her and the other women at the ward. Starring Amber Heard, Mamie Gummer, Danielle Panabaker, Lyndsy Fonesca, Laura-Leigh, Mika Boorem, and Jared Harris. The Ward is an engaging yet flawed film from John Carpenter.

Set in 1966 rural Oregon, the film revolves a young woman who is sent to a mental hospital after burning a farmhouse where she is sent to a special ward with four other women as they’re being haunted by a ghost who was killed in the ward. It’s a film that plays into a woman dealing with her surroundings as she wonders if she is getting out as she befriends a few of the women while they deal with this ghost and why it’s after them. While the story is a simple one, it also plays into the world of psychiatry as these women are trying to deal with their illnesses and hope to get out and return to the real world. Yet, the film’s screenplay has some strange ideas for the narrative which does try to be ambiguous over the ghost that is haunting these women but there’s some flaws in there as well as some unanswered questions that alludes to a young woman who is killed early in the film. Once the story progresses and characters get killed off, the film does become formulaic where it also raises some questions as the script does have some holes about what is going on and why this ghost is after these women.

John Carpenter’s direction is very intoxicating in the way he captures the life of a group of women inside this mental ward as many of them display different personalities. Even as he starts the film off with some conventional tactics where a young woman is killed by a ghost while the main character Kristen (Amber Heard) burns down a farmhouse. Carpenter does use some unique tracking shots as well as close-ups and medium shots to maintain a sense of intimacy plus a few wide shots for stylistic reasons. Yet, he is hampered by some of the script’s flaws where it does deviate from conventional scares as Carpenter tries to keep things unpredictable and play with the rhythms of suspense. Another aspect of the film that kind of hurts it is the twist in the end as it relates to the ghost and why Kristen is a major target. Still, it does make things interesting though it does leave a lot of unanswered questions. Overall, Carpenter creates a worthwhile though underwhelming film about a woman being haunted by a ghost.

Cinematographer Yaron Orbach does excellent work with the film‘s cinematography that helps set a mood for some scenes in some of the interiors including the hallways as well as some stylish lights to play into its sense of horror. Editor Patrick McMahon does nice work with the editing where it does play into the rhythms of suspense while some of it deviates towards fast-cutting style to play in jump-scares that doesn‘t work at times. Production designer Paul Peters, with set decorator Rachel M. Thompson and art director Vincent DeFelice, does brilliant work with the design of the ward and other aspects of the hospital where it doesn‘t make itself too much like the 1960s but rather something that is cut-off from the rest of the world. Costume designer Lisa Caryl-Vukas does fantastic work with the costumes where it sort of plays into early 60s clothing as it helps distinguishes the characters and their personalities.

Special effects makeup designer Greg Nicotero and Kevin Wasner do amazing work with the look of the ghost as well as some of the eerie elements of horror in who the ghost kills. Visual effects supervisor Jason McKee does terrific work with the visual effects as it relates to the ghost and some of the eerie elements in the film. Sound designers Javier Bennassar and Leslie Shatz do superb work with the sound to help create some textures into the sound and help build up some of the suspense and terror that looms in the film. The film’s music by Mark Kilian is wonderful for its orchestral-based score that plays into some of the drama as well as help creating the air of suspense throughout the film.

The casting by Pam Dixon is remarkable as it features some notable small roles from Susanna Burney as the chief nurse in the ward Nurse Lundt, Dan Anderson as the chief orderly Roy, Sali Sayler as the young woman who is killed by the ghost early in the film, Mark Chamberlin as a sad man that often makes a visit at the hospital as if he knows someone who was there, and Mika Boorem as the young woman named Alice who would later become the ghost that would haunt the ward. Jared Harris is excellent as Dr. Stringer as the hospital psychiatrist who is trying to help Kristen and the other women in the ward as he is a character that is quite ambiguous due to his methods as he really wants to help them. Laura-Leigh is fantastic as Zoey as the traumatized young woman who acts and dresses like a young girl as she is the most innocent person in the ward.

Danielle Panabaker is superb as Sarah as the snobbish young woman who likes to flirt with the orderlies as she isn’t convinced that something is haunting the ward. Lyndsy Fonesca is wonderful as Iris as the prim drawer who likes to make sketches as she knows the rules of the ward as she is also the most cautious. Mamie Gummer is brilliant as Emily as the most outgoing of the women as she knows what is going on as she is also quite tough but also carries some guilt over what happened to Alice. Finally, there’s Amber Heard in an amazing performance as Kristen as this young woman who is sent to the asylum for arson as she copes with the ghost as she tries to find a way to deal with it and hopefully get out of the asylum as it’s a very compelling performance from Heard.

While it is very conventional and has some very weak aspects in its script, The Ward is still a good film from John Carpenter. Armed with an excellent cast as well as some dazzling visuals, the film does manage to offer something a bit different from the current wave of mainstream horror films as it is told by one of the genre’s great masters. In the end, The Ward is a terrific though very flawed film from John Carpenter.

John Carpenter Films: Dark Star - Assault on Precinct 13 - Halloween - Someone’s Watching Me! - Elvis - The Fog - Escape from New York - The Thing - Christine - Starman - Big Trouble in Little China - Prince of Darkness - They Live - Memoirs of an Invisible Man - Body Bags - In the Mouth of Madness - Village of the Damned - Escape from L.A. - Vampires - Ghosts of Mars

Nice to see a positive review of this film. I saw a lot of hate directed at it. I never understood that hate. As you said the film is handled well, directed well. It has some great creepy moments and some solid jump scares. The acting is really damn good. The only weakness is the script and the similarity of the plot to "Shutter Island" which came out the same year. Most of the complaints I saw about the film were directly comparing it to "Shutter Island" instead of enjoying it on its own merits. Anyway, I found it a solid Carpenter film, not one of his best by any means, but hardly the catastrophe that others seem to make out.

Thank you. I too thought of Shutter Island when I saw this film though it didn't deter from what I did enjoy about this film. It is a minor John Carpenter film but I will take that over most mediocre to poor horror films from anyone else these days. I just hope Carpenter has another good film in him and maybe can put out one more masterpiece before he leaves us. If not, at least he made something worthwhile.