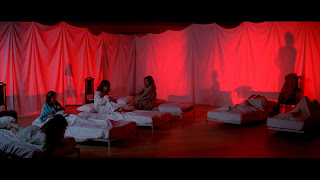 Based on the essay Suspiria de Profundis by Thomas De Quincey, Suspiria is the story of an American ballet student who attends a German ballet academy as she deals with its surroundings and a series of strange events. Directed and narrated by Dario Argento and screenplay by Argento and Daria Nicolodi, the film is an exploration into the supernatural and a woman who goes into the unknown as she copes with fear of this unknown. Starring Jessica Harper, Stefania Casini, Flavio Bucci, Miguel Bose, Alida Valli, Udo Kier, and Joan Bennett. Suspiria is a rapturous yet terrifying film from Dario Argento.

A young American ballet student arrives in Munich to attend a prestigious ballet academy where she encounters a series of strange events that led to the deaths of a few who either left the academy or were forced out. It’s a film that plays into a woman who wonders if this academy that she was asked to be in has some kind of secret where the first thing she sees on her arrival is a young woman leaving in terror as she screams some words during the rain. The film’s screenplay by Dario Argento and Daria Nicolodi doesn’t exactly play into traditional horror as it’s more about Suzy Bannon (Jessica Harper) coping with her surroundings but also the strange events that is happening where her roommate Sarah (Stefania Casini) believes that something is going on. Especially when certain things happen around Munich to a few characters as it seems like the ones who are killed are those who have antagonized someone in the academy. It adds to the since of intrigue and suspense where Suzy would ask questions about what is going on just as the pile of deaths start to get bigger.

Argento’s direction is very mesmerizing for not just the usage of the anamorphic lenses which captures a great depth of field of the rooms at the academy. It also helps establish a world that is unlike anything from its usage of the locations in Munich to the places some of the characters go to. Much of it is presented in a very stylish manner with lots of red as a backdrop of sorts as well as some lavish colors in some of the hotels and places where the film takes place. Argento’s approach to wide shots as well as some intricate dolly, tracking shots, and some stylish crane shots help play into the atmosphere of some scenes where it’s not about the suspense or horror but rather to play into what these characters are doing at the ballet studio. Even a simple scene where a child stares at a blind man’s dog would have a lot to say but would also create moments to slowly set-up the suspense.

The scenes of terror such as a sequence early in the film where this young woman named Pat (Eva Axen) who had just left the academy ponders what is chasing her. The moments of terror are swift as red definitely serves as a symbolic color not just because it’s the color of blood but also something much more. Argento’s approach to using colored lights help add to the atmospheric tone of the film while knowing where to play with the rhythms of suspense. Especially in the film’s climax where Suzy is forced to wonder what is really going on in this academy as it slowly unveils itself as there is also that sense of dread of something bad is about to happen. Overall, Argento crafts an intoxicating yet unsettling film about a young woman who goes to a place where dark things happen that she doesn’t know about.

Cinematographer Luciano Tovoli does incredible work with the film‘s cinematography with its usage on lights and color for many of the interior scenes including the ones set at night as it adds a lot to the look and tone of the film as it is one of the film‘s major highlights. Editor Franco Fraticelli does excellent work with the editing with its usage of jump-cuts and other stylish cuts to help play into the film‘s suspense and horror. Production designer Giuseppe Bassan does fantastic work with the design of the apartment the character Pat goes to early in the film as well as the look of the academy in its interior/exterior settings. Costume designer Pierangelo Cicoletti does brilliant work with the costumes as they all have an air of style to distinguish some of the characters including the very innocent Suzy who wears simple dresses and other clothes to play into her personality.

Makeup supervisor Pierantonio Mecacci does terrific work with the makeup for some of the characters including those who get killed in some of the most gruesome ways. The special effects work of Germano Natali are superb for some of the key elements that play into some of the film‘s terrifying moments including a very chilling scene at a plaza. Sound recordist Mario Dallimonti and the sound effects work of Luciano Anzellotti do amazing work with the sound as it helps create an air of suspense and atmosphere into some of the scenes as well in some of the film’s quieter moments. The film’s music by Dario Argento and the progressive rock band Goblin is phenomenal as it is another major highlight of the film with its discordant approach to progressive rock with its haunting keyboard textures, bombastic percussions, chilling string pieces, and all sorts of arrangements as doesn’t just help play to the horror but manages to do a lot for the film as it is one of the finest scores in horror.

The film’s remarkable cast include some notable small roles from Franca Scagnetti as a mysterious cook, Jacopo Mariani as a young boy living at the academy named Albert, Eva Haxen as the student who fled the academy in Pat Hingle, Barbara Magnolfi as the vivacious ballerina Olga, Udo Kier as a psychologist Suzy talks to about what is happening, and Rudolph Schundler in a superb performance as Professor Milius as a man who tells Suzy what he might know about what is happening at the academy. Miguel Bose is terrific as the silent but chilling servant Mark who always deliver food and wine to Suzy during her illness while Flavio Bucci is excellent as the blind pianist Daniel who gets accused of having his dog attack Albert.

Joan Bennett is fantastic as the academy co-director Madame Blanc as this mysterious woman who starts off as very kind and always listening to Suzy but has an element of ambiguity that makes her more compelling. Alida Valli is brilliant as Miss Tanner as this dance instructor who is stern but fair as she is also very ambiguous while being very antagonistic towards those who either question or criticize the academy. Stefania Casini is amazing as Sarah as a ballerina who believes something is up as she tries to figure out what is going on while giving notes to Suzy in case something happens to her. Finally, there’s Jessica Harper in a remarkable performance as Suzy Bannon as an American ballet student who arrives at this mysterious academy where she becomes ill as she wonders what is going as it’s a performance that does contain the conventions of horror but also one that is engaging.

Suspiria is a magnificent film from Dario Argento. Filled with a great ensemble cast, exotic visuals, intricate art direction, and a hellacious score by Goblin. The film is truly not just one of the finest films for the horror genre but also one that isn’t afraid to be style over substance. Especially as it plays into a heightened sense of reality where no one is safe and everything could be some form of dark reality with lots of blood. In the end, Suspiria is an outstanding film from Dario Argento.

I really like this film. It's funny you reviewed it because I was thinking the other day how I'd like to watch it again. (Could've sworn I owned it..but nope) The soundtrack for this is insane.

That soundtrack knocked me the fuck out. Man, I've heard some good horror music soundtracks but this one is the best and it fits with the entire film. I wanna see it again. It fucking ruled. THAT IS A HORROR FILM.

I think this is my favourite Argento film although there's a couple that give it a run for its money. It has a real visceral quality thanks to his nightmarish visuals and penchant for style over substance. The ending is devastatingly effective.

@Dan-It is such an astonishing film as I was just wowed by what Argento was doing and the sense of atmosphere it was creating. The ending was just great. I need to see this on a DVD/Blu-Ray release.

This didn't really work for me. It's pretty tense and visually stunning but the script ruined it for me.

@Sonia-I had no issues with the script as I thought it helped play into the intrigue. I wanna see it again as I'm going to watch the remake later this weekend.