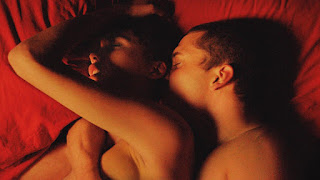 Written and directed by Gaspar Noe, Love is the story of a film student who copes with the fallout of an affair he had with another woman as well as the dissolution of a relationship he holds dear to his heart. The film is a raw exploration into the idea of love told in a fascinating style that blurs the line into the realm of pornography and art. Starring Karl Glusman, Klara Kristin, Deborah Revy, Isabelle Nicouf, and Aomi Muyock. Love is a provocative yet exhilarating film from Gaspar Noe.

The film plays into a young man who reflects on his life with a young woman he loved dearly while coping with the affair that ended their relationship as he has a child with that woman whom he’s become not fond of. It’s a film with a simple premise where this young film student named Murphy (Karl Glusman) doesn’t just deal with the life he has as a parent and husband but also the life he had before where he receives word that his former girlfriend Electra (Aomi Muyock) has disappeared. For Murphy, he doesn’t look into the life he had with Electra but also why it fell apart through a series of events.

Gaspar Noe’s script has a very offbeat narrative where its first act is about Murphy dealing with the news about Electra where he looks back at the events of their break-up but also how a simple menage-a-trois with a young woman named Omi (Klara Kristin) would be the catalyst for the end. The second act plays into life with Electra through the good and bad times while the third act would play into reasons into their dissolution but also how they met. The narrative is largely told from Murphy‘s perspective that features a lot of voice-over narration where he deals with his actions.

Noe’s direction is quite stylish in terms of the world he creates as it is shot on location in Paris. Yet, it is also restrained in terms of the compositions he creates where it doesn’t just involve some tracking shots and some long takes. Noe’s approach to framing in terms of the medium and wide shots not only play into how much Murphy and Electra love each other but also the intensity of their love. With the usage of the steadicam to follow the characters or to capture places they go to, Noe makes it very evident that these people who are in love and were willing to display that. Even as they would dabble in drugs and all sorts of things where they would also find ways to test their commitments such as attending an orgy or do other things. It is as if Noe wanted to create these places out of a sense of temptation where Murphy and Electra are willing to push themselves to see how it can fall apart.

Cinematographer Benoit Debie does incredible work with the film‘s cinematography with its array of colored lights and moods to play into the world of the clubs and some of the places the characters go to as well as some naturalistic lighting for some of the scenes as the photography is one of the film‘s highlights. Editors Gaspar Noe and Denis Bedlow do excellent work with the editing with its stylish approach to jump-cuts and blinking cuts as it play into the sense of memory and the reflective approach to the narrative. Production designer Samantha Benne and art director Virginie Verdeaux do amazing work with the set design from the look of the clubs and some of the places Murphy and Electra go to as well as the apartment Murphy lives in as it features nods to a couple of films by Noe.

Visual effects supervisor Pierre Buffin do terrific work with some of the film‘s minimal visual effects that includes some of the moments captured on 3D that would involve some of the film‘s explicit moments. Sound editor Ken Yasumoto does brilliant work with the sound for its many sound textures in the mixing and creating an atmosphere in some of the scenes set in clubs and such along with the intimate moments in the film. Music supervisor Pascal Meyer does a fantastic job with the film‘s music as he creates a very diverse collection of music that features contributions from Pink Floyd, Funkadelic, Thomas Bangalter of Daft Punk, Death in Vegas, Coil, Brian Eno, John Frusciante, Salem, Glenn Gould, John Carpenter, Goblin, and Sebastian along with classical music pieces from Johann Sebastian Bach and Erik Satie.

The film’s superb cast includes some notable appearances from Juan Saavedra as Murphy and Electra’s drug dealer friend Julio, Isabelle Nicouf as Electra’s mother Nora, Ugo Fox as Murphy’s son Gaspar, Deborah Revy as an actress named Paula that Murphy meets at a party, and Gaspar Noe as an art gallery owner Electra used to be with. Klara Kristin is wonderful as Murphy’s wife Omi as the woman he would impregnate as she starts off as this young student that Murphy and Electra have an interest with only to become a woman that is unhappy married to Murphy. Aomi Muyock is radiant as Electra as this young art student who falls for Murphy while being someone that’s been in and out of love with men as she ponders if Murphy can be faithful while questioning her own commitment. Finally, there’s Karl Glusman in a remarkable performance as Murphy as this film student who is in love with Electra as he tries to hold on to her only to find ways to fuck it up as he later deals with the consequences of his own actions and copes with the life he has now.

Love is a phenomenal film from Gaspar Noe. Featuring a fantastic cast, gorgeous visuals, a mesmerizing premise, and a rapturous soundtrack. It’s a film that’s not afraid to be very visceral into the raw and primal nature that is love in many of its complexities. Especially as it isn’t afraid to be very explicit in its sexual content without the need to tease or sugarcoat it. In the end, Love is a spectacular film from Gaspar Noe.

I really want to see this but my arthouse/indie theaters don't have 3D so I'm afraid I'll haft to miss out. Curious about how he uses sex and not have it be pornographic. Benoit Dobie's chromatography will be good to check out. One question, Where did you see it?

Well, it didn't come to an arthouse theater near my city either nor would it feature in 3D which is a shame as it would be the only other 3D movie (the other was Avatar) I would see. I did the only logical thing. Download the film through a torrent and watch it on my laptop which I did on Xmas day. I probably would've enjoyed it even more if I saw it in the theater and in 3D. Plus, I might've gotten laid in the theater.

A spectacular film indeed. So happy you liked this one, my friend. Noe really made something special here.

@Alex-Agreed. I knew it was going to be confrontational and challenging but not in an emotional level which I think worked as it played int something that is very real about love.