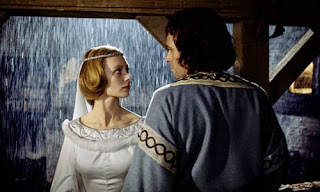 Based on the play by William Shakespeare, Macbeth is the story of a Highland lord who becomes the king of Scotland through deceit, plotting, and other things where he succumbs to his own paranoia and guilt. Directed by Roman Polanski and screenplay by Polanski and Kenneth Tynan, the film is an interpretation of the Shakespearean tragedy that explores a man’s decent for ambition in a stylized yet atmospheric take on the play with Jon Finch as the titular role. Also starring Francesca Annis, Martin Shaw, Terence Bayler, John Stride, Nicholas Selby, Stephan Chase, Paul Shelley, Maisie MacFarquhar, Elsie Taylor, Noelle Rimmington, Keith Chegwin, and Diane Fletcher. Macbeth is a riveting yet eerie film from Roman Polanski.

Set in medieval Scotland, the film revolves around a young lord who encounters three witches as he believes in a prophecy that would allow him to become King of Scotland where he and his wife would conspire to kill the king only to be driven by guilt and paranoia. It’s a story that has been told many times yet what Roman Polanski and co-screenwriter Kenneth Tynan do is create something that plays into a man believing into something that isn’t real and may not be about him. Yet, Macbeth (Jon Finch) and his wife (Francesca Annis) take these words very seriously as they believe that killing King Duncan (Nicholas Selby) would bring them good fortune. Instead, questions arise about Duncan’s death as those such as Macduff (Terence Bayler) and Prince Malcolm (Stephan Chase) suspect something isn’t right.

Even as one of the play’s more minor characters in Ross (John Stride) would be given more to do as a man who aids those who are in power for his own gain where he would align with whoever can be powerful. All of which plays into not just the concept about ambition but also its fallacies where guilt would come into play for both Macbeth and his wife through events and visions that would trouble them. For Macbeth, paranoia would ensue where he would kill those close to him and drive those around him mad. Notably in the climatic battle in the third act where Macbeth tries to make sense of all that is happening to him as he faces those he had hurt and such on his ascent to the throne.

Polanski’s direction is definitely intoxicating in terms of the images he creates as well as maintaining an atmosphere into the locations he uses which are set in Wales and England. Polanski’s approach to wide and medium shots not only capture the beauty of those locations with its hills, woods, and all sorts of scenery in these places but also in how it creates this world that quite vast but also unsettling. Notably in scenes where rain is an important part to the landscape which adds an atmosphere that is morose as well as have this stench of death which sets the tone for what Macbeth will deal with. Especially with some of the violence that happens in the film as it is quite gruesome as it play into Macbeth’s own thirst for power and his mistrust towards nearly everyone around him.

The direction also has this air of theatricality in some of the intimate moments that occur yet it is done with a sense of grit in the way the actors are presented into the frame. Most notably a scene where Lady Macbeth is walking in her room naked as she is coping with her own guilt and the trauma in her actions as if she is hallucinating about what is in her body. The film’s climatic battle doesn’t just display these eerie moments of violence but also a sense of terror that plays into the guilt that looms over Macbeth as if all of the misdeeds he had committed into his ascent to the throne is coming back to haunt him as it’s told through such potent imagery through what Polanski unveils in the film. Overall, Polanski creates a spectacular yet haunting film about a man’s desire for power and the fallacy of ambition.

Cinematographer Gil Taylor does brilliant work with the film‘s very colorful cinematography with its emphasis on naturalistic colors for some of the skyline scenes along with unique lighting and fog for the scenes set in the rain as well as some low-key lights for some of the interiors set at night. Editor Alistair McIntyre does amazing work with the editing as it is quite stylish with its usage of jump-cuts but also in creating rhythmic cuts to play up the suspense and drama. Production designer Wilfred Shingleton, with set decorator Bryan Graves and art director Fred Carter, does fantastic work with the look of the castles from the home of Macbeth as well as the look of the home of the three witches and the other castles that the other characters live in.

Costume designer Anthony Mendleson does nice work with the look of the clothes from the robes of the women to the armor and clothes that the men wear. The special effects work of Ted Samuels is terrific for some of the hallucinations that Macbeth would see as it plays into the paranoia that looms over him. Sound mixer Simon Kaye does superb work with the sound in creating some sound effects in some of the battles and fights as well as in some of the sound effects that play into the eerie tone of the film. The film’s music by the Third Ear Band is incredible as it’s one of the film’s highlights for its mixture of traditional folk music of the times mixed in with haunting music pieces that play into the sense of dread that looms in the film.

The film’s remarkable cast features some notable small roles from Keith Chegwin as Banquo’s son Fleance, Mark Dightam as Macduff’s son, Richard Pearson as a doctor who expresses concern for Lady Macbeth’s well-being, Diane Fletcher as Lady Macduff, and as the three witches, Maisie MacFarquhar, Elsie Taylor, and Noelle Rimmington. Paul Shelley and Stephan Chase are terrific in their respective roles as Donalbain and Malcolm as King Duncan’s sons who both flee to England as they both suspect that something wasn’t right in the death of their father. Nicholas Selby is excellent as King Duncan as this man who gives Macbeth so much as he just wants to rule Scotland in peace while deciding to give Malcolm the chance to be the next in line for the throne. John Stride is fantastic as Ross as a knight who aids Macbeth in killing those while aligning himself with whoever has a shift in power so he can be safe and be conniving as it’s a very complex performance.

Terence Bayler is brilliant as Macduff as a general who suspects that Macbeth might be involved with King Duncan’s death as he later copes with events and such that forces him to confront Macbeth in the film’s climax. Martin Shaw is amazing as Banquo as Macbeth’s best friend who too saw the prophecy as he starts to become alienated by Macbeth’s sudden change in behavior. Francesca Annis is phenomenal as Lady Macbeth as this woman who would goad her husband and scheme with him as she would succumb to madness as Annis brings a more low-key approach to the character. Finally, there’s Jon Finch in a riveting performance as the titular character as a lord who would scheme and kill his way to become king only to be driven by guilt and paranoia as it’s a performance that is larger than life and full of intensity as it is one of Finch’s best works.

Macbeth is a sensational film from Roman Polanski that features great performances from Jon Finch, Francesca Annis, Terence Bayler, Martin Shaw, and John Stride. It’s a film that takes the Shakespearean tragedy and put into a darker setting that plays true to what Shakespeare might’ve conveyed as well as has a sense of danger that is typical of what Polanski does. In the end, Macbeth is a tremendous film from Roman Polanski.

Macbeth is one of my favorite of Shakespeare's plays, so I'm always eager to see a good version of it. I've only managed to see part of this version, but I really liked it. It feels quite cinematic, something that not all Shakespeare adaptations manage. There is also this great feeling of dread and impending doom that looms over the whole thing (or as much as I saw). The use of natural light and torches reminded me of the Zeferelli version of "Hamlet" with Mel Gibson. That had a similar look and feel to it that worked very well. I need to check out the full version of this film. It sounds like a good one.

@Roman J. Martell-I just saw it as I hadn't seen Polanski's version since I was a senior in high school. It was a very long time. Yet, of the film versions that I've seen. I would say this version is probably the closest to the Shakespearean play though Welles' version is just as good. Yet, my favorite interpretation of the play is by Akira Kurosawa in Throne of Blood.