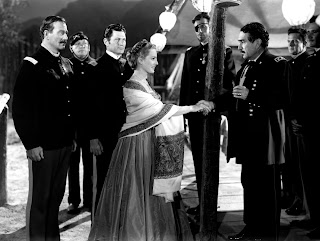 Based on the short story Mission with No Record for the Saturday Evening Post magazine by James Warner Bellah, Rio Grande is the story of a cavalry unit who are trying to control an Indian uprising near the Mexican border. Directed by John Ford and screenplay by James Kevin McGuinness, the film is the third and final film of a trilogy of films devoted to the cavalry as it would revolve around a cavalry officer torn between his duty and the family he‘s become estranged with. Starring John Wayne, Maureen O’Hara, Claude Jarman Jr., Ben Johnson, Harry Carey Jr., Chill Wills, Victor McLaglen, and Grant Withers. Rio Grande is a compelling yet exciting film from John Ford.

Set in 1879, the film revolves an officer who is trying to run a fort and protect his settlers from the Apache who are trying to create chaos near the Mexican border in Texas. Even as he finds himself dealing with the arrival of his estranged wife and their son who had just enlisted in the cavalry after failing at West Point where he struggles to be a soldier as well as a good man. It’s a film that plays into a man trying to keep everything together as he is aware that the Apache are nearby the border where he hopes to stop them yet is uneasy by issues he has in his past relating to his family. James Kevin McGuinness’ script is structured to play into Lt. Colonel Kirby Yorke (John Wayne) as he tries to balance between family and duty as the first act is him dealing with his son Jeff (Claude Jarman Jr.) being enlisted as he doesn’t give him any special treatment as well as the arrival of his estranged wife Kathleen (Maureen O’Hara) whom he’s still in love with.

The second act revolves around Lt. Colonel Yorke’s attempt to balance duty and family while going on a small mission to the Rio Grande to meet with Mexican officers as Kathleen gets some unneeded reminders of her old home in the form of Major Sgt. Quincannon (Victor McLaglen) who is a friend of Lt. Col. Yorke. There’s a subplot involving a recruit named Tyree (Ben Johnson) who is rumored to be a fugitive as he tries to hide from a marshal as he would help Jeff go through training. The film’s third act revolves around a mission about getting the settlers to a fort where a lot happens but it also shows what kind of man Lt. Col. Yorke does as well as how his son is willing to prove himself to his father.

John Ford’s direction is definitely evocative for its usage of the wide and medium shots to capture much of the film’s location set in Monument Valley in Utah for many of the scenes set in the deserts along with some locations set in the town of Moab, Utah and areas near the Colorado River. Many of it play into the expansion of the West but also the unrest that is looming where Lt. Col. Yorke has to try and keep things civilized. The direction also has Ford creating a lot of these gorgeous images with the mountains and such as beautiful backdrops while he would create some intimate moments in the scenes at the fort involving Lt. Col. Yorke and his wife with some medium shots but also some close-ups. There are also moments where there are musical performances including a scene where musicians play for Kathleen as well as a general visiting the fort as well as a few comedic moments provided by Major Sgt. Quincannon. The climatic raid in the third act is definitely thrilling not just for Ford’s usage of dolly and tracking shots to capture the chase but also in creating a sense of urgency into the action. There is some suspense as it relates to what is needed to do but also a sense of what is happening where Ford knows how to shoot the action and make it mean something. Overall, Ford creates a fascinating and gripping film about a cavalry officer’s attempt to find balance in his role as a soldier and as a man.

Cinematographer Bert Glennon does brilliant work with the film‘s black-and-white photography from its usage of low-key lights and shadows for some of the film‘s nighttime interior/exterior scenes to the gorgeous look of the daytime exteriors to capture some of the film‘s locations. Editor Jack Murray does excellent work with the editing as a lot of it is straightforward with some rhythmic cuts to play into some of the action. Art director Frank Hotaling, with set decorators John McCarthy Jr. and Charles S. Thompson, does fantastic work with the look of the fort as well as the tents and wagons used in the film.

Costume designer Adele Palmer does nice work with the look of some of the uniforms as well as the dresses that Kathleen wears. The sound work of Earl Crain Sr. and Howard Wilson is superb for its naturalistic approach to the sound in the locations as well as in the music as well as some sound effects for the gunfire and arrows. The film’s music by Victor Young is wonderful for its orchestral score that can be serene for the dramatic moments to bombastic with its action scenes as the music also includes traditional songs performed by Sons of the Pioneers who appear in the film as regimental singers.

The film’s marvelous cast include some notable small roles from Karolyn Grimes as a young girl Major Sgt. Quincannon is fond of, Peter Ortiz and Steve Pendleton as a couple of captains aiding Lt. Col. Yorke, and Grant Withers as a marshal trying to find Tyree. J. Carrol Naish is terrific as General Philip Sheridan who makes a visit in the film’s second half as he would give Lt. Col. Yorke a major assignment while Chill Wills is fantastic as Dr. Wilkins who is the regiment’s surgeon that often provides some wise ideas. Victor McLaglen is excellent as Major Sgt. Quincannon as the film’s comic relief of sorts who likes to drink but also try to deal with what he did years ago that has gained him the ire of Kathleen Yorke.

Claude Jarman Jr. is superb as Lt. Col. Yorke’s son Jeff as a young recruit who tries to find his role in the military as well as trying to be himself without the need to impress his father whom he never saw for 15 years. Harry Carey Jr. is brilliant as Daniel “Sandy” Boone as a trooper who helps Jeff in learning the ropes while being a bit comical himself while Ben Johnson is amazing as the trooper Tyree as someone that is good with horses yet is hiding a secret as he is pursued by a marshal. Maureen O’Hara is great as Kathleen Yorke as Lt. Col. Yorke’s estranged wife who arrives to the fort to pull Jeff out only to find herself falling for her husband all over again but struggle with his duty as a soldier as it’s one of O’Hara’s finest performances. Finally, there’s John Wayne in a phenomenal performance as Lt. Colonel Kirby Yorke as this cavalry officer trying to do his job while becoming uneasy about having his son enlist as a cavalry trooper and becoming more uneasy with the presence of his wife where finds himself trying to balance being a soldier and be a good man as it’s Wayne in one of his defining roles.

I should check this one out! A lot of people who's a fan of John Ford said this is one of his best work, plus I haven't seen anything w/ John Wayne nor Maureen O'Hara.

While I think this is the weakest film of John Ford's Cavalry Trilogy, it is still a film worth seeking out as there's a lot of films of John Ford to go into. Yet, I would prefer The Searchers and Stagecoach which I think are better films and the best introduction to Ford as well as his collaboration with John Wayne. Plus, Maureen O'Hara is always a joy to watch.