It's Impossible to Learn to Plow by Reading Books 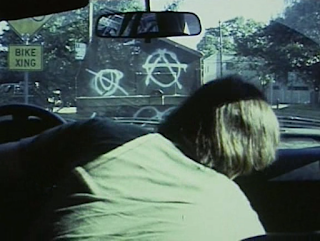 Written, directed, shot, edited, and starring Richard Linklater, It’s Impossible to Learn to Plow by Reading Books is the story of a traveler who meets different people and talks about random things. The film is a minimalist story that serves as a precursor of sorts to his 1991 breakthrough film Slacker as the film is shot in Super 8mm film. The result is a fascinating and entrancing film from Richard Linklater.

The film is a simple story of a young man traveling around America via train, plane, and hitchhiking as he wanders around meeting people and doing mundane things during his journey. It’s a film that doesn’t have much of a plot nor does it really feature a lot of dialogue as it’s more of a study of loneliness as well as what a young man does as he is traveling across the country. He would also have a life at home where he would spend time with family but also ponder his own existence through the minimal dialogue that Richard Linklater has created. All of which is told in this simplistic yet minimalist visual style as Linklater’s direction doesn’t really go for any kind of visual flairs. Shot on 8mm and in a static camera shot where it would have some wide and medium shots. The camera never moves as it’s always still and it is always gazing into something including scenes shot in a train where it looks out at all of these locales.

With Linklater playing the main character who is unnamed as well as being the cinematographer and editor. Linklater’s approach to the photography is very simple as it is shot in color while knowing that the film stock has its limitations. The graininess in the stock adds to some of the visual language of the film while the editing itself is very straightforward to play with some of the long takes that Linklater creates. In the performance aspect, it’s really more of a non-performance as Linklater just plays it straight as well as the people he meets that includes the cult musician Daniel Johnston. With the aid of sound editor Eric Friend to capture much of the film’s naturalistic sound, Linklater aims for something is very natural despite some moments where some of the dialogue is barely heard. Overall, Linklater creates a compelling film about the wandering travels of a loner.

That's one hell of a title! I've never heard of this, but I tend to ignore everything Linklater after sitting through Boyhood. Nice review!

If you have the Criterion DVD for Slacker, this film is available as a bonus feature as it's the first film by Linklater made with a budget of $3000.

This sounds unique ... and I think I'd watch it for the title alone.

@Stephanie Marshall Ward-If you have Hulu or some cash to spend for this month's Criterion sale at Barnes & Noble, then get the DVD/Blu-Ray for Slacker.

Ahah, I thought the same thing as Brittani. I hadn't even heard of this Steven, interesting stuff!

@ruth-It's a very obscure film as I stated that it could be found probably on Hulu or just get the Slacker DVD as it's worth a look despite the fact that it's got no plot at all.