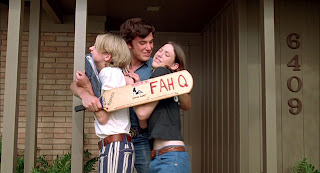 Written and directed by Richard Linklater, Dazed & Confused is the story of a group of high school kids celebrating the last day of school in the summer of 1976 as they deal with what is ahead in the course of an entire day. The film is an exploration of kids getting ready for the summer where some are ready to embark their final year in high school with some ready to become freshmen and deal with the hell that is high school. Starring Jason London, Matthew McConaughey, Joey Lauren Adams, Ben Affleck, Milla Jovovich, Cole Hauser, Nicky Katt, Parker Posey, Wiley Wiggins, Rory Cochrane, and Adam Goldberg. Dazed & Confused is a wild and rapturous film from Richard Linklater.

Set on the last day of school in a small Texan town in 1976, the film is a simple story about the day in the life of a group of kids who are about to become seniors later in the fall as some would take part in hazing kids who would become freshman as they spend the entire day partying and thinking about what will happen. It’s a film that has a simple story with a lot of subplots where kids who are to become freshman deal with not just hazing but also what will happen in high school. Some would deal with partying and seeing what will happen while one of them in a high school quarterback finds himself needing to sign a piece of paper to prohibit him from using drugs and alcohol from his coach.

For that character in Randall “Pink” Floyd (Jason London), he refuses to as he just wants to live freely while some friends wonder why he won’t do it while some say he should stand up for his own beliefs. He would also help out a freshman in Mitch Kramer (Wiley Wiggins) whose sister Jodi (Michelle Burke) is about to become a senior as she would help out a freshman in Sabrina (Christin Hinojosa) in understanding what would happen in high school. Mitch and Sabrina would endure brutal forms of hazing with the former being targeted by this asshole senior in O’Bannion (Ben Affleck) who has failed to graduate as he takes pleasure in hazing seniors by beating them in the ass with a paddle. The film’s third act would be set in a keg party as it involves a lot of characters where there’s some fights but also discussions on what will happen after high school.

Richard Linklater’s direction is quite simple for the way he presents 1976 Texas as it is shot in areas near Austin, Texas to express a world that is quite vibrant but also not do too much to make it feel like a period film. Much of the compositions are simple but also has this sense of energy in how they’re shot and the scenes that are created. Notably the way the young girls are being hazed by these older girls as they would be humiliated in such a way that is comical but also horrific. The usage of close-ups and medium shots help play into some of the intimacy but also in some of these raucous moments that happen in the film as it’s presented with some humor. The direction does have a few wide shots but it is mostly about the parties and characters just talking with one another. Even as there’s a few fights and moments that play into the world of youth as they all deal with the emergence of adulthood. Overall, Linklater creates an exhilarating and heartfelt film about a group of kids getting ready for the summer on their last day of school.

Cinematographer Lee Daniel does excellent work with the film‘s cinematography as it‘s largely straightforward with some naturalistic shots for much of the film‘s daytime scenes with some lighting to play into the interior/exterior scenes set at night. Editor Sandra Adair does amazing work with the editing as it is largely straightforward with some rhythmic cuts to play into the humor as well as some of the action with a few slow-motion cuts. Production designer John Frick, with set decorator Deborah Pastor and art director Jenny C. Patrick, do fantastic work with the look of the pool hall some of the people hang out at as well as the school halls and some of the props that are created to recreate the world of the 1970s.

Costume designer Katherine Dover does brilliant work with the film‘s costumes as it plays into the look of the 70s from the ragged look of the stoners to more stylish look of the shirts and bellbottoms some of the characters wear as well as the nightmare that was the leisure suit. Sound editors Sandy Gendler and Val Kuklowsky do nice work with the sound as it is very natural and straightforward while providing some mixing and edits in some of the parties that happen throughout the film. Music supervisor Harry Garfield does superb work with film’s music soundtrack as it features a lot of the music that was playing during that time from acts such as Aerosmith, Sweet, KISS, Alice Cooper, the Runaways, Dr. John, Black Oak Arkansas, Seals & Croft, Lynyrd Skynyrd, Black Sabbath, War, Nazareth, Ted Nugent, ZZ Top, Edgar Winter Group, the Steve Miller Band, Bob Dylan, and Peter Frampton.

The casting by Don Phillips is incredible for the large ensemble that is created for the film as it would include many actors who would later become big stars in their own right. Notable small roles include Kim Krizan as a history teacher, Mark Vandermeulen and Jeremy Fox as a couple of freshmen kids who are trying to avoid being hazed, Deena Martin and Christine Harnos as a couple of senior friends of Jodi, Catherine Avril Morris as a sophomore who takes a liking to Mitch, Esteban Powell as a freshman friend of Mitch who has been targeted by O’Bannion, and Jason O. Smith as a friend of Pink who also takes part in the hazing but is kinder to the freshmen. Other noteworthy small roles include Joey Lauren Adams as Pink’s girlfriend Simone, Nicky Katt as a tough guy in Clint, Cole Hauser as fellow football player Benny O’Donnell, Sasha Jenson as the comical football player Don Dawson, Shawn Andrews as a stoner friend of Pink in Kevin whose plan for a house party falters, and Milla Jovovich as Kevin’s girlfriend Michelle who is kind of the silent hanger-on.

Ben Affleck and Parker Posey are fantastic in their respective roles as the bullies O’Bannion and Darla with the former being a complete asshole who takes pleasure in beating up boys while the latter is on a power trip to humiliate young freshmen girls. Adam Goldberg, Anthony Rapp, and Marissa Ribisi are excellent in their respective roles as the intellectuals Mike, Tony, and Cynthia as they often observe everything around them while daring to ask big questions about their future. Christin Hinojosa and Wiley Wiggins are brilliant in their roles as the freshmen Sabrina and Mitch as two young kids who are about to enter high school as they encounter partying but also some of the dark aspects of high school.

Michelle Burke is wonderful as Jodi as Mitch’s older sister who has some feelings for Pink while trying to help Sabrina get ready for the realities of high school. Rory Cochrane is superb as the stoner Ron Slater as this comic relief that likes to smoke weed and do some funny shit. Jason London is amazing as Randall “Pink” Floyd as a football star who finds himself compromised by his coach about his lifestyle as he begins to think about his own life. Finally, there’s Matthew McConaughey in a phenomenal performance as Wooderson as a guy in his early 20s who hangs out with the guys as he is kind of a philosopher while being the coolest motherfucker in the room.

Dazed & Confused is a spectacular film from Richard Linklater. Featuring a great cast, a fun soundtrack, and many different stories set in the span of an entire day. It’s a film that isn’t just funny but also allow to ask big questions about growing up and living in the moment. In the end, Dazed & Confused is a magnificent film from Richard Linklater.

Oooooh this is a gem of a movie. I was late coming to Dazed and Confused but it is a favorite of mine now. I was a teen from the 80's but we still did the small town thing of riding around on Friday and Saturday nights, stopping at our local drive-in, and just hanging out. This flick captures all of that to perfection.

And you mention the music - one of the best music soundtracks ever compiled. I had read where a sizable chunk of the budget was spent on the song rights but Linklater understood the importance of the music in this type of picture. It is suck a vital ingredient.

@keith71_98-This is a film I saw in the early 90s as a teen as it's one of those films I grew up on. It still holds up as it is quite exciting and lively but also dares to ask some big questions and have fun about it.

I had no idea Ben Affleck was in Dazed & Confused as well! I know Matthew McConaughey is in it and it's one of his most popular roles. I might give this one a shot, though not really interested in its spiritual sequel.

@ruth-Oh this is a must-see. This was the film that introduced the world to a new generation of stars. Not just Ben Affleck and Matthew McConaughey. Parker Posey was discovered through this film. Cole Hauser, Jason London, Joey Lauren Adams, and Adam Goldberg all got their start in this film. It's really essential as it's also my favorite Richard Linklater film.

A great, great film - maybe Linklater's most personal and one that resonates in ways that are so satisfying. Killer soundtrack, amazing cast of then-young and up and coming actors... what more could you want? I watch this film at least once a year. Great stuff.

@J.D. Lafrance-That's a film that will never get old as you see something new every time you watch it as well as the fact that it is so fun but also has a lot to say. That is the gift of what Richard Linklater can do as a filmmaker and why he's so revered.